Bread crusts are often considered a waste product, but they can actually be used in a variety of recipes.

In this post, I’ll show you how to turn those leftover bread crusts into something delicious.

I’ll also share some tips on how to store them so they don’t go to waste.

So read on for all the details.

The first and easiest way to use up leftover bread crusts is to make a stuffing.

You can add in whatever vegetables and herbs you have on hand, and even some cooked sausage or chicken if you want.

Stuffing is a versatile dish that can be served as a side or as a main course.

Just bake it in a casserole dish and you’re good to go.

Another easy way to use up bread crusts is to make croutons.

Just cut the crusts into small pieces, toss with some olive oil and seasonings, and bake in a preheated oven until golden brown.

Croutons are great on salads or as a topping for soup.

You can even eat them on their own as a snack.

Making bread pudding is a great way to use up those crusty ends of the loaf.

To start, you need to make a custard by whisking together eggs, milk, sugar, and vanilla.

Then tear the bread into small pieces and add it to the custard.

Let the mixture soak for a few minutes, then add in any additional flavorings you like.

I like to add raisins and cinnamon, but you can use chocolate chips, dried fruit, or even nuts.

Bake the bread pudding in a dish until set, then serve with a dollop of whipped cream or ice cream.

Breadcrumbs are a versatile ingredient that can be used in many different recipes.

To make them, simply pulse the bread crusts in a food processor until they’re finely ground.

Then use them as a topping for casseroles, gratins, or even roasted vegetables.

You can also use breadcrumbs to thicken soups or stews.

Another creative way to use bread crusts is to make French toast.

The key to making good French toast is to soak the bread in the egg mixture for long enough so that it’s well saturated.

Soak the bread for at least 5 minutes, then cook in a preheated skillet until golden brown.

A panini is a type of sandwich that’s usually made with Italian bread.

But you can use any type of bread, including the crusty ends of the loaf.

Just add your favorite sandwich fillings, then grill in a panini press or on a stovetop grill until the bread is crispy and the cheese is melted.

I love this for a quick and easy lunch.

Lastly, one of my favorite ways to use bread crusts is to make garlic bread.

Simply spread some softened butter on the bread, then sprinkle with garlic powder, salt, and pepper.

You can also add in some shredded cheese if you want.

Then bake in a preheated oven until the bread is crispy and the cheese is melted.

Serve with a marinara sauce for dipping.

Are the crusts of bread better for you?

Yes, the crusts of bread are better for you.

They are a good source of dietary fiber, which can help promote regularity, and they also contain more vitamins and minerals than the rest.

Fiber is important for keeping you feeling full, so it can help you control your weight.

The nutrients in the crust can also help improve your overall health.

What is a crust of bread?

A crust of bread is the outermost layer of a bread loaf.

It is typically harder and darker in color than the rest and might be unpalatable if too thick.

Some people prefer to remove the crust from their bread before eating it, while others enjoy the crunchy texture and flavor that the crust provides (source).

Does bread have a crust?

Yes, most types of bread have a crust.

The crust is the hard, outer layer that forms when the dough is cooked.

Some people enjoy eating the crust, while others prefer to avoid it.

Crusts can vary in thickness and flavor, depending on the type of bread.

For example, sourdough bread has a thick, chewy crust, while baguettes have a thin, crispy crust.

What happens when you eat bread crusts?

There are some noticeable benefits to eating bread crusts.

For one, they are a good source of fiber.

Additionally, they contain more vitamins and minerals than the soft part.

Bread crusts also tend to be more filling than the rest of the loaf, which can help with weight control (source).

Does the crust taste different?

The crust can taste different depending on how it is cooked.

For example, if the bread is baked, the crust will be crispy.

If the bread is boiled, the crust will be soft (source).

Why does bread crust taste good? 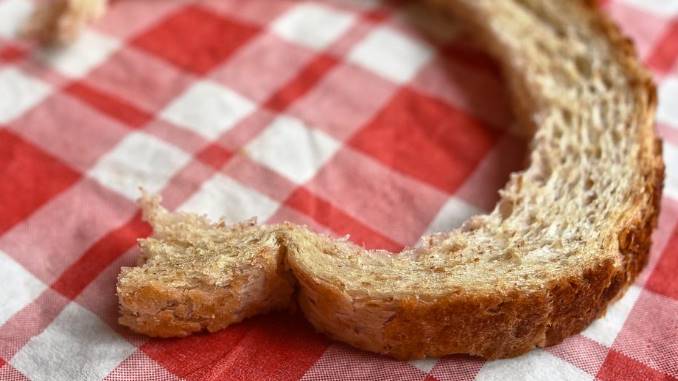 There are a few reasons why bread crusts are often considered to be the best part.

First, the crust is where the bread gets its nice, golden color from.

This is because the crust is exposed to more heat than the rest during baking, which causes it to caramelize and turn brown.

Additionally, the crust is where the bread’s flavor is concentrated.

This is because the crust is made up’s outermost layer, which has had the most time to absorb all of the flavors from the dough and baking process.

Finally, the crust is typically more crunchy than the rest, which makes it a nice contrast to the rest’s soft texture.

All of these factors come together to make the bread crust one of the most popular parts.

Is bread crust bad for dogs?

Yes, bread crust can be bad for dogs.

It can be a choking hazard, and if your dog is allergic to wheat, it can cause an allergic reaction.

The bread crust is also not very nutritious for dogs.

Why is my bread crust so hard?

There are a few reasons why your bread crust might be coming out hard.

One reason could be that you are not using enough water when you are making the dough.

If the dough is too dry, it will result in a harder crust.

Another reason could be that you are over-baking your bread.

When the bread is baked for too long, the crust will become hard.

Finally, if you are using a higher protein flour, this can also lead to a harder crust.

Use a lower protein flour for a softer crust.

How many calories do you save by cutting the crust off bread?

A lot of people believe that cutting the crust off bread saves calories, but this is not necessarily true.

The amount of calories saved by cutting the crust off bread depends on the type and size.

If you are eating a sandwich with two slices of bread, then you would save about 10 calories by cutting the crust off.

However, if you are eating a piece of toast, then you would only save about 2-3 calories.

So, while you may save some calories by cutting the crust off the bread, it is not a significant amount.

What are the types of crust in baking?

There are three types of crust in baking: shortcrust, puff pastry, and flaky pastry.

Shortcrust is the most common type of crust used in pies and tarts.

Puff pastry is a light and airy crust that is often used for cream puffs or eclairs.

Flaky pastry is a delicate crust that is often used for turnovers or croissants.

How is bread crust made?

The bread crust is made by the Maillard reaction between the sugars and amino acids in the dough.

This reaction causes the bread to brown and gives it a crispy texture (source).

Egg wash is often used in baking to give the crust of bread and pastries a golden, shiny appearance.

It can also help keep the crust crispy.

Egg wash is simply a mixture of egg and water (or milk) that is brushed onto the surface of the dough before baking (source).

How do I get a crispy crust on my bread?

There are a few things you can do to get a crispy crust on your bread.

One is to brush the top with olive oil before baking.

This will help create a barrier between the bread and the heat, resulting in a crispier crust.

Another method is to bake the bread on a preheated baking stone or pizza stone.

This will help to create an evenly heated surface, again resulting in a crispier crust.

Finally, you can try using a bread knife to score the top before baking.

This will allow the heat to penetrate the bread more evenly, creating a crispier crust.

I hope these ideas give you some inspiration on what to do with those leftover bread crusts.

If you have any other ideas, please share them with me.

And if you try any of these recipes, I’d love to hear how they turned out.