Looking for creative ideas on what to do with leftover beef stroganoff?

This dish is incredibly versatile and can be used in a variety of recipes.

From tacos to soup, the possibilities are endless.

Here are a few of my favorite recipes that will help you use up those leftovers.

First, let’s start with an easy one.

Using pre-made beef stroganoff, simply warm it up and place it in a soft taco shell.

You can also add some chopped green onions for extra flavor.

These tacos are delicious and only take a few minutes to make.

Use it in a soup

Another great way to use up leftover beef stroganoff is by adding it to a soup.

This is a great way to stretch the dish and make it go further.

To start, simply sauté some diced onions and garlic in a large pot.

Then, add the beef stroganoff and enough chicken or beef broth to cover.

Bring the soup to a simmer and let it cook for 10 minutes.

Finally, add some chopped kale or spinach and let it wilt down into the soup.

Next, you can use the beef stroganoff to make some delicious quesadillas.

Start by spreading some of the beef mixtures on a whole wheat tortilla.

Then, top with shredded cheese and another tortilla.

Cook in a skillet over medium heat until the cheese is melted and the tortillas are golden brown.

Serve with sour cream and salsa on the side.

Use it as a pizza topping

Pizza is always a good idea, especially when you have leftovers to use up.

Simply spread the beef stroganoff over a pre-made pizza crust and top with shredded mozzarella cheese.

Bake in a 450-degree oven for 10-12 minutes or until the crust is golden brown and the cheese is melted.

How about some delicious beef stroganoff calzones? Start by spreading some of the beef mixtures on a whole wheat tortilla.

Then, top with shredded cheese and another tortilla.

Wet the edges of the tortillas with water and press them together to seal.

Cook in a skillet over medium heat until the tortillas are golden brown and the cheese is melted.

Use it in empanadas

You can also use the beef stroganoff to make some delicious empanadas.

The first step is to make a dough using flour, water, and salt.

Then, roll the dough out into thin circles.

Next, place a spoonful of the beef stroganoff in the center of each circle.

Fold the dough over to create a half-moon shape and press the edges together to seal.

Cook in hot oil until they are golden brown on both sides.

Make a pasta dish with it

Finally, you can turn the beef stroganoff into a delicious pasta dish.

Start by cooking some pasta in a large pot of boiling water.

While the pasta is cooking, sauté some diced onions and garlic in a large skillet.

Then, add the beef stroganoff and let it simmer until heated through.

Once the pasta is cooked, add it to the skillet and toss with the beef stroganoff.

What is stroganoff sauce made of?

Stroganoff sauce is made of beef broth, mushrooms, and sour cream.

It is typically served over egg noodles or rice.

What cut of meat is used for beef stroganoff?

Beef stroganoff is traditionally made with a cut of beef known as “stewing beef.” This is a tough cut of meat that is best suited for slow cooking methods, such as braising or stewing.

The long cooking time tenderizes the meat and makes it perfect for stroganoff.

Is Stroganoff Russian or German?

There is some debate over whether Stroganoff is Russian or German in origin, but it is generally agreed that the dish was created by a Russian chef in the 19th century.

The dish consists of beef that is cooked in a sour cream sauce and served with egg noodles.

It is typically garnished with chopped onions and parsley.

How do you make beef stroganoff better?

This dish is all about beef, so don’t skimp on the meat.

Use a good-quality beef that is well-marbled for the best flavor and texture.

Cut the beef into thick slices or chunks so that it stays tender during cooking.

Brown the beef in batches until it is nicely seared all over.

This adds flavor and helps to prevent the beef from stewing in its own juices (source).

How do you thicken stroganoff sauce?

There are a few ways to thicken stroganoff sauce.

One way is to add a roux, which is a mixture of flour and butter that is used to thicken sauces.

Another way is to add some cornstarch or arrowroot powder to the sauce.

Finally, you can simply cook the sauce for longer so that it reduces and thickens (source). 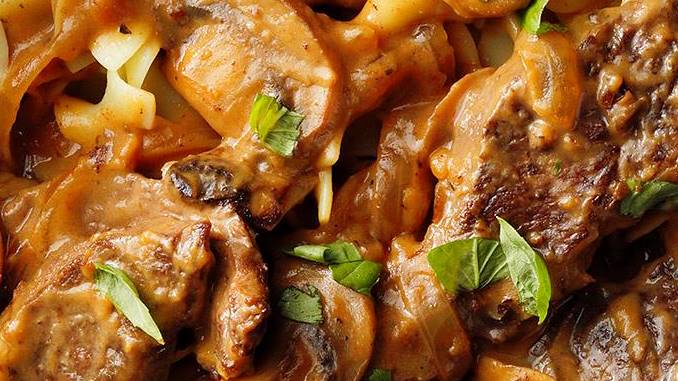 There is no one answer to this question as beef stroganoff can vary greatly in taste depending on the recipe.

However, in general, beef stroganoff is a creamy dish with a slightly sour flavor from the addition of sour cream or yogurt.

The beef is usually tender and cooked in a rich gravy made with mushrooms, onions, and garlic.

Some recipes also call for the addition of Worcestershire sauce, mustard, or red wine to add even more flavor to the dish.

What is stroganoff seasoning?

Stroganoff seasoning is a type of seasoning that is typically used in Russian cuisine.

It is often used to season beef stroganoff, a dish that consists of beef and mushrooms cooked in a sour cream sauce.

What can you use instead of egg noodles in beef stroganoff?

You could use any type of noodle in beef stroganoff, but egg noodles are traditionally used.

You could also use rice, quinoa, or even potatoes as starch to accompany the dish.

What wine goes with beef stroganoff?

There are many different types of wine that can pair well with beef stroganoff.

Some red wines that would go well with this dish include Pinot Noir, Merlot, and Cabernet Sauvignon.

For white wines, try a Chardonnay or a Riesling.

Sparkling wines such as Champagne or Prosecco can also be a good choice.

Ultimately, it is up to you to decide what wine you would like to pair with your beef stroganoff.

Experiment and find what you think tastes best (source).

When did Beef Stroganoff originate?

There is some debate over the exact origins of beef stroganoff, but it is generally agreed that the dish originated in Russia in the 19th century.

It is named for Count Pavel Alexandrovich Stroganov, a Russian nobleman who was known for his love of good food.

The dish consists of tender beef strips cooked in a sour cream sauce and served over egg noodles or rice (source).

There are a few stories about how Stroganoff got its name.

One story says that the dish was created by a chef in the 18th century named Igor Ivanovich Stroganov.

Another story says that the dish was named after a countess named Natalya Alexeyevna Stroganova, who was known for her love of good food.

Whatever the origin of its name, Stroganoff has become a popular dish around the world (source).

When was Beef Stroganoff popular in the US?

It was introduced to America by Russian immigrants and quickly became a favorite American dish.

Beef Stroganoff remains a popular dish today and can be found on the menus of many restaurants.

How do you keep sour cream from curdling in beef stroganoff?

There are a couple of ways to keep sour cream from curdling in beef stroganoff.

One way is to add the sour cream to the dish at the very end after the beef has been cooked and the sauce has been thickened.

Another way is to temper the sour cream by slowly adding it to a small amount of the hot sauce, whisking it until it’s smooth, and then adding it to the rest of the sauce.

If you find that your sour cream has already curdled, you can try whisking in a little bit of milk or cream to smooth it out (source).

As you can see, there are many different ways that you can use up leftover beef stroganoff.

These are just a few of my favorite recipes.

I hope that you find them helpful and that they give you some ideas on what to do with your leftovers.

I hope this was helpful.