What do you do when you have leftover baked ham?

You could always eat it as is, or you could repurpose it into something new and delicious.

Whether you’re looking for a quick and easy dish to make or just want some ideas on how to use up that leftover ham, I’ve got you covered.

From breakfast to dinner and everything in between, check out these recipes for some inspiration.

First, you can try this delicious ham and broccoli frittata.

It’s perfect for a quick breakfast or an easy dinner.

To make this dish, first, you’ll need to cook the broccoli in a pan until it’s soft.

Then, you’ll add the broccoli and ham to a bowl with some eggs, cheese, and milk.

Once everything is mixed together, pour it into a baking dish and bake for about 20 minutes.

Another great option for using up leftover ham is these potato skins.

They make a great appetizer or side dish and they’re super easy to make.

To make them, you’ll need to bake some potatoes first.

Once they’re done, scoop out the insides, leaving a little bit of potato around the edges.

Then, top the potatoes with ham, cheese, and whatever other toppings you like.

Bake for another 10-15 minutes and you’re done.

This is one of my favorite ways to use up the leftover.

It’s a great dish for breakfast or brunch, and it’s super easy to make.

Just layer some ham, cheese, and bread in a baking dish.

Then, whisk together some eggs, milk, and mustard.

Pour the egg mixture over the top of the casserole and bake for about 30 minutes.

How about some creamy spaghetti for dinner? This dish is so easy to make and it’s really tasty.

To start, you can cook some spaghetti according to the package directions.

Then, add in some ham, cream cheese, Parmesan cheese, and milk.

Cook until the sauce is nice and creamy.

Next, we have this delicious oven-baked macaroni and cheese.

It’s a great dish for lunch or dinner, and it’s packed with flavor.

To make this dish, you’ll need to cook the macaroni according to the package directions.

Then, add in some ham, peas, and cheese.

Pour everything into a baking dish and bake for about 20 minutes.

These ham and cheese sliders are perfect for a quick snack or an easy dinner.

To make them, you’ll need to layer some ham and cheese on top of slider buns.

Then, brush the tops with a little bit of melted butter.

Finally, here is a delicious quiche that’s perfect for breakfast, lunch, or dinner.

To make this quiche, you’ll need to cook the broccoli in a pan until it’s soft.

Then, add the broccoli and ham to a pie crust with some cheddar cheese.

Whisk together some eggs, milk, and mustard.

Pour the egg mixture over the top of the quiche and bake for about 30 minutes.

How long is leftover baked ham good for?

You can keep leftover baked ham in the fridge for up to three days.

After that, it’s best to freeze it.

When stored properly in the freezer, the baked ham will keep for two to three months (source).

What can I make with already cooked ham?

There are a number of dishes that can be made with already cooked ham.

These include ham and cheese sliders, ham and bean soup, ham and pineapple skewers, and ham and egg cups.

All of these recipes require only a few simple ingredients and can be made in under an hour.

So if you’re looking for a quick and easy meal, cooked ham is a great option.

How long is leftover cooked ham good in the fridge?

Cooked ham can last in the fridge for 3-5 days or in the freezer for 2-3 months.

If you want to extend its shelf life, you can try freezing it in an airtight container (source).

Can you eat cooked ham after 5 days?

You can eat cooked ham after 5 days, but it may not be as fresh as it was when it was first cooked.

If you’re unsure whether the ham is still good, check for signs of spoilage, such as mold or an unpleasant odor.

If the ham looks and smells fine, it should be safe to eat (source).

Why is my cooked ham slimy?

A ham that has been properly cooked should not be slimy.

If your ham is slimy, it may be because it was not cooked properly.

Ham is a type of pork that has been cured and smoked.

It is safe to eat ham that has been cooked to an internal temperature of 145 degrees Fahrenheit.

However, if the ham is not cooked to this temperature, it may be contaminated with bacteria that can cause food poisoning (source).

How long can you keep a honey-baked ham in the refrigerator?

You can keep a honey-baked ham in the refrigerator for up to two weeks.

Be sure to wrap it tightly in plastic wrap or aluminum foil to prevent it from drying out (source).

Can you heat a pre-cooked ham in the microwave?

Yes, you can heat a pre-cooked ham in the microwave.

Place the ham on a microwave-safe plate and heat it on high for about 1 minute per ounce.

Let the ham rest for 5 minutes before slicing and serving.

What is the best way to cook a precooked ham?

Precooked hams are fully cooked and can be eaten cold or heated.

To heat a precooked ham, remove the ham from the package and place it on a rack in a roasting pan.

tent the ham with foil, making sure not to touch the ham itself.

Bake at 325 degrees for about 15 minutes per pound, until the internal temperature of the ham reaches 140 degrees.

Remove from the oven, let rest for 5 minutes, then slice and serve.

Where should you take the temperature of a baked ham fat or muscle?

The best place to take the temperature of a baked ham is in the thickest part of the meat, away from any bone.

This will give you an accurate reading of the ham’s internal temperature (source).

Can you freeze cooked ham slices?

Just make sure to wrap them tightly in freezer-safe wrap or baggies to prevent freezer burn.

When you’re ready to eat them, thaw the ham in the refrigerator overnight before reheating.

How many times can you refreeze cooked ham? 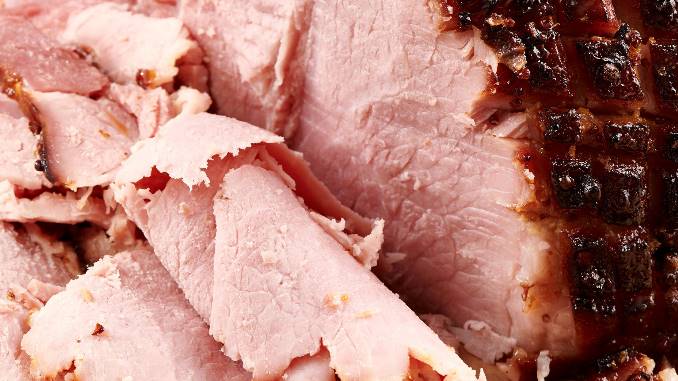 But it’s important to make sure that it is properly thawed and cooked before doing so.

Otherwise, you run the risk of bacteria contaminating the meat.

When in doubt, it’s always best to err on the side of caution and throw out any ham that has been frozen more than once.

What happens if you microwave cooked ham?

The answer to this question may depend on the type of ham that you are microwaving.

If you are microwaving fully cooked ham, then there is no need to worry about it being undercooked.

However, if you are microwaving raw or uncooked ham, then you need to be careful to make sure that it is cooked all the way through before eating it.

Microwaving ham can cause it to become tough and dry, so it is important to follow the directions on the package carefully.

If you are unsure about whether or not your ham is cooked all the way through, it is always better to err on the side of caution and cook it for a little longer rather than risk eating the undercooked meat (source).

What is the best way to store cooked ham?

Refrigerate cooked ham in a covered container or wrap tightly with aluminum foil or plastic wrap.

Ham keeps best when stored at 40° F or slightly below; at very cold temperatures, the fat may become hard and difficult to slice.

To enjoy cooked ham at its best, use it within 3 to 4 days after cooking.

If you need to store ham for a longer period of time, it can be frozen for up to 2 months.

As you can see, there are lots of different ways to use up the leftover baked ham.

Whether you’re looking for a quick and easy dish or something a little more elaborate, I hope you found some inspiration from this list.

link to What Are the Pros & Cons of a 10 Quart Air Fryer?

Do you have an air fryer? If not, are you thinking of getting one? Air fryers have become really popular in recent years, and for good reason. They're a great way to cook food without using a...

Continue Reading
link to How to Use a 10 Quart Air Fryer?

If you're like me, you're always looking for ways to make cooking easier and faster. That's where air fryers come in. They cook food quickly and evenly, without all of the added oil that is...