Taco Lasagna is a typical Mexican-Italian casserole favored by American families as a feast dish.

This Mexican dish is likable due to its diverse flavors (from meats, tomatoes, beans, and cheese).

In addition, it does not take much time to cook as people can make it ahead and freeze it in the fridge before cooking. And in this post, let’s talk about what it is exactly, and what are the things you need to know about it.

What is Taco Lasagna?

Taco Lasagna (also known as Mexican Lasagna or Mexican Casserole) – is a family-friendly dish, bathed in cheese and baked until cheese melted perfectly. The dish is made by layering tortillas (or pasta), ground beef, chilies, diced tomatoes, beans, and cheese.

Is It Authentic Mexican Food?

Regarding its origin, many people believe that it is Mexican food, but unfortunately, it’s not. In fact, this dish originates from the classic Italian lasagna.

Specifically, early Italian immigrants in the US merged inexpensive ingredients with Italian cooking styles. In Central and South America, immigrants found the meat to be cheap, and olive oil is seen as inferior, so they took advantage of them.

Hence, it is considered an Italian-Mexican dish. The cooking method between this and traditional lasagna is quite similar, layering the ingredients. Yet, it uses tortillas, chilies, and tacos instead of pasta, ricotta, and mozzarella like the traditional lasagna.

Is It Popular In The US? 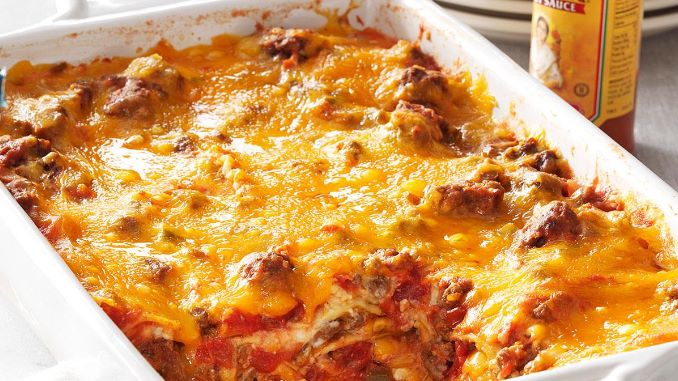 Nowadays, in the US, this dish is fairly popular.

Some people want it daily, yet the majority of American families still serve it occasionally. In banquet dinner, Taco Lasagna is graced as an entrée (main dish), while in Italy, it is served in a small portion in the first course.

As mentioned above, Lasagna was spread to the US by Italian immigrants. The breakout of Lasagna in  America started in the early 1900s. Then, in the middle of the seventies, Lasagna gradually became widely popular.

According to Salvatore Esposito, an Italimmigrantants living in Virginia, nobody was interested when he first opened his own “true Italian restaurant.”

Esposito realized Americans did not want “Italian lasagna.” Therefore, he, as well as other cooks, learned how to “Americanise” lasagna.

The current Lasagna available in the US has more sauce, more meat, and more cheese. In addition, Americans prefer the sauce to be runnier. Some Americans enjoy this in daily meals, so they simplified the cooking process.

Unlike traditional lasagna, cooking may take several hours. Italians admit that they slave over the cooking for the classic lasagna, so only feasts are worth that effort.

In the States, it only takes 1 hour 10 minutes in total to cook and prepare. Due to its simplicity, more US families are engaged in cooking this.

Is It Healthy Or Unhealthy?

It is a big dilemma for Weight Watchers to stand between the temptation of food and the importance of health. A discussion has been raised among nutritional experts about Taco Lasagna’s benefits for health; there are lots of opposite ideas.

Due to a mountainous amount of cheese, it is considered unhealthy as it may cause obesity. The others deny that statement. According to the rest of the experts, it provides calories for activities. 8 servings provides 40.1g Carbohydrates, 24.6g Fat, 405Kcal, 33.7g Protein, 96mg Cholesterol.

It depends on how you cook, so we do not have a proper answer for the question “Is it healthy or unhealthy?” To make it healthier, you use the same elements but change a few ingredients and the toppings. Lean ground turkey is suggested as an alternative for beef because of its lower calories.

You can also use some healthy ingredients such as corn tortillas, add more onions, avocados. The cheese will be reduced; just use a small amount, which is enough to enhance the smell.

What Side Dishes Are Good To Serve With It?

Taco Lasagna can be considered as a one-side dish or accompanied by a variety of side dishes. Some options such as Mexican Street Corn or chips into Lasagna dip.

If you are afraid of not being full enough, you can use rice or beans to add more carbs. It is also delicious when eating with Mexican rice, Tamalitos (Mexican Corn cake), Refried Beans, Rio Cilantro Rice, and Black beans.

Somebody pairs it with salad, garlic bread, or Air Fryer Asparagus. It can also be served with lettuce, chopped fresh tomatoes, jalapenos (medium-sized chili pepper from the hot pepper family), sour cream, and guacamole on the side.

Can You Prepare Taco Lasagna Ahead Of Time?

Apart from fresh meat, the rest of the ingredients are canned and dried food, which can be restored in the fridge. Therefore, it can be prepared ahead of and stored in the refrigerator several days before baking.

In the modern world, especially in the USA, people keep fast-pace of life, they do not have much time for cooking. As we mentioned above, the Lasagna cooking process is kind of complicated. Rather than preparing food and baking at the same time, people often do the preliminary cooking and store ingredients to save time.

Usually, ingredients are prepared ahead 2 days before cooking. Then, when people want to eat, they just need to take it out from the fridge and bake it in the oven. If you freeze it, you can even store it for 3 months. Ingredients and a step-by-step guide can be found here.

Can You Freeze It For Later Use?

Taco Lasagna can be frozen and reheated to use. However, one note for you is the sauce will get runny after thawing. Thus, before freezing the lasagna, you should remove the mixture from the pan used to bake it in a plastic container and cover it with aluminum foil.

The suggested container is the one with the airtight lid to prevent the air from making the food go off. Otherwise, you can pour it into a plastic bag with zipping and store it in the freezer for up to 3 months. Before using, you can thaw it one night before baking.

The safe time for reheat is 15-25 minutes until the top gets brown and the bubbles appear on the top of the lasagna. While baking, the tray of lasagna must be closely covered. You can also cut into small portions and reheat with the microwave, using the carousel tray if they are small enough to rotate in the microwave.

What Oven Setting Is Best For Cooking This?

The ideal oven setting is 350°F. At this temperature, our dish is well-baked and reheated.

Before baking, remember to fully preheat the oven so the heat is evenly spread in the oven and the ingredients are ensured well-cooked. When reheating, you can also use the microwave.

What To Do With Leftovers?

Though it is very delicious, sometimes you cannot have it all. Before putting it into the fridge, let it cool completely, cover it tightly with aluminum foil. It can be stored in the refrigerator for 3 to 5 days or even up to 3 months. The leftover can be cut into small and serve as breakfast with eggs.

Regardless of not a Mexican authentic dish, Taco Lasagna is still favored by thousands of Mexicans and Americans. Eating Taco Lasagna is healthy if we know how to customize it with green ingredients.

You can prepare the ingredients several days before baking to save more time. The leftovers can be reheat and used for breakfast the day after. Remember to defrost one night before baking again.