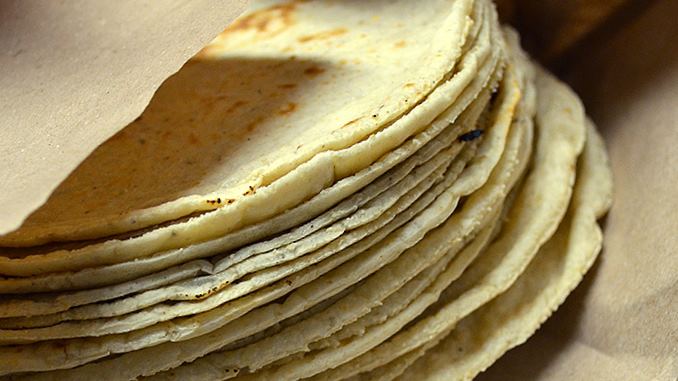 Through the centuries, flatbreads have been passed down across the world from many different cultures, leading to many variants. Some common types of those are tortillas and wraps.

Yet, despite their similar appearances, these two are not the same. Read until the end to get hold of all distinguishing characteristics between tortilla vs wrap.

Overview Of Tortilla And Wrap

As mentioned before, a tortilla is a type of flatbread that originated from Mexico. Thus, its prominence comes from Mexican cuisine as a wrap for many dishes, such as tacos and burritos.

In detail, it can be prepared using either corn flour or wheat flour. However, the name “tortilla” is widely used to refer to the latter.

A wrap is another common type of flatbread. In the United States, it is a popular lunch dish referring to both the outer shell and the final product.

It serves the same purpose as sliced bread in that a wrap keeps ingredients and fillings of own choice together, such as guacamole, meat, cheese, grilled onions, etc. While nutritional content may vary, healthy wraps can be a great way to add variety to your daily lunch routine.

3 Main Differences Between Tortilla Vs Wrap

Dough: Though this varies depending on the bread manufacturer, wraps usually include yeast, which allows for at least a modest degree of leavening. Furthermore, common wrap styles, like Armenian lavash or pita bread, contain yeast though the dough is not allowed to rise as drastically as in non-flat bread.

On the other hand, tortillas are thin flatbreads produced from unleavened, water-based wheat or corn dough. Compared to wraps, they have a less porous, airy texture.

Cooking method: Additionally, tortillas are usually fried for a few seconds on each side in a skillet or hot pan. Meanwhile, people make wraps by baking them, and the length of time they are cooked influences their crispiness. For example, the baking time for wraps is less than 10 minutes.

In addition, their size is also conducive to having it cut in half, which is typical in wrap sandwiches but not so common in the taco, burrito, or tortilla counterparts.

Wraps are a more generic type of flatbread, and as a result, bakers may be more creative with the additional ingredients. For example, people usually add sugar and honey when making wraps.

Meanwhile, almost all tortilla recipes don’t use either sugar or honey. Furthermore, wrap recipes may contain flavoring or spices that you would never see in a tortilla.

What Is A Healthier Alternative To Flour Tortillas?

Corn tortillas are a healthier substitute than flour versions. In detail, they contain more whole grains, which is beneficial for your heart and digestive health. Moreover, because corn tortillas are smaller (about 6 inches), they have built-in portion control. One of their significant benefits is being gluten-free, making them ideal for those who are gluten-intolerant.

What Do You Eat With Tortilla Wraps?

Generally, tortilla is an indispensable ingredient in many Mexican dishes. Thus, let’s take a look at some popular recipes:

How Can I Choose The Best Tortillas And Wraps?

There are many products of tortillas and wraps available at stores. Thus, look at these tips when choosing one for your meals: