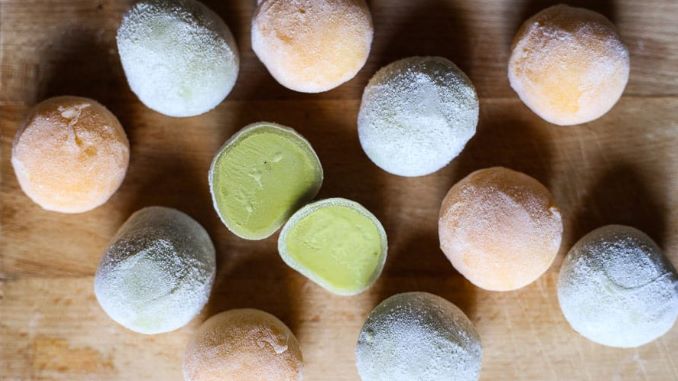 Here are the 5 best sweet rice flour substitutes you should know about:

If you want to learn more about how to actually use these alternatives, then keep on reading.

As you might know, sweet rice flour is one of those ingredients which you probably didn’t know you should have in your pantry.

Recently, it has gained so much popularity among Westerners because it’s gluten-free!

Now, you’ll see a lot of restaurant pastry chefs swapping certain ingredients with this option for baked goods like pumpkin bread and brownies and as a roux starter in gravy, bechamel, and cheese sauces.

What Can Substitute It Then?

But don’t fret. Although this particular list is a bit short, all these will work as a good alternative.

Made from bleached, skinned, and then ground almond nuts, this became a favorite in a lot of baked goods because it has not lost its rich flavor – that lovely fatty nuttiness – in the manufacturing process.

It is also gluten-free, low in carbohydrates, packed with protein, and filled with other vitamins and minerals.

It’s a good replacement for Sweet Rice Flour because of the texture it gives to the final product.

Cakes made from almonds have a bite to them instead of light fluffiness.

That may not be what some people like in a cake but when it comes to subbing our featured ingredient, it’s perfect!

Aside from baked goods, this almond product is also an awesome thickening agent.

If you don’t mind the nut flavor, use this for your gravy and other sauces.

For every cup of the glutinous type, use one and a half cup of almond.
This is because the latter isn’t as sticky as the former.

You should also add a bit of sweetener to your dish if you want to level out the almond flavor because it can be a bit overpowering in a recipe that calls for our featured ingredient. Remember, rice has a very neutral taste.

If this is the first time you’ve heard of this product, you aren’t alone.

The coconut has numerous byproducts and this is one of the newest.

It is made by squeezing out the milk from the coconut milk, drying it at a very low temperature, and then grinding it into a soft powder that is just as fine and smooth as APF.

Considered by many health experts as a healthy option, this grain, and gluten-free food is not just rich in antioxidants, vitamins, and minerals.

It is also great for baked confection.

When added to a mix, the result is a chewy-textured bread or cake.

For every cup needed, add just a quarter of this ingredient.

The other ¾ should be another type of flour or your baked confection will be too heavy and unpalatable.

This will require a lot of liquids compared to other flours.

Add an egg every quarter cup (equivalent to 32 grams) that you use in a baked dish.

You may also add oil or butter instead if you don’t like your cake to taste too eggy.

It isn’t advisable to use this in gravies and sauces because it can be a bit gritty.

Also, it has that distinct coconut flavor that will go well with specific foods (chocolate, coffee, and banana just to name a few) but might mess up other dishes.

If you’re a Japanese noodle fan, you have had this.

Soba, the thin, brownish, slightly elastic noodles used in stir-fry or dipped in Tsuyu sauce, is made from buckwheat.

Soba, when kneaded properly and cooked just right, has a good bite to it.

Replace one cup of the original ingredient with a quarter to a half of this alternative.

To complete the cup, mix in other kinds of flour.

When using buckwheat, try mixing the batter a bit longer to give it that chew.

Blinis and crepes have a light, airy mouthfeel because they were whisked for a short time.

This is from cassava, a root crop that grows in warm climates like Asia and South America.

It is made by getting the starch from the wash-out of shredded cassava and then drying it.

It is also gluten-free and, although it has a slight sweetness to it, is sugar-free too.

Have you ever had boba pearls in Asian-style milk tea?

If so, then you know how remarkably chewy it is.

And that’s the texture that you’re looking for in a sweet rice substitute.

If the recipe calls for a cup of our featured ingredient, use a cup of Tapioca as well.

Because this has a bit of sweetness to it already, you might want to lessen the sugar noted in the recipe.

It may surprise some, particularly Westerners, that this has been around for centuries.

This ancient grain has been used as animal feed, as fuel, and in traditional Middle Eastern recipes like the Indian Jowar Roti.

But because of its nutritional value (it’s gluten-free too!), more and more people are getting interested in it as well.

The consensus among those who have tried this is that it has the exact consistency and flavor as our featured ingredient and that you wouldn’t be able to tell the difference at all.

There is no need to adjust with the liquids and sweeteners.

Again, these two are interchangeable!

The Almost Infinite Options of Flour

Who else has been awed by the varied selection of flours in the supermarket?

There’s the bleached or white one for sandwich bread and rolls, the supposedly healthier whole-wheat type, the even healthier gluten-free version (like our featured ingredient), the one used specifically for cakes, the other for pastries, semolina for pizza, a wide array of rice types for noodles, and so many more!

And if you were thinking of getting a huge sack of the All-Purpose kind because it can be used as an alternative to all those, think again.

While it can be swapped for some, it’s not that aptly named, unfortunately.

Worse, you can’t use APF to replace our featured ingredient.

And this might stun a whole lot of people but even the plain rice flour won’t do.

There are several undeniable similarities between the two mainly because it comes from the same crop.

First, both are incredibly nutritious – packed with vitamins and minerals and high in fiber – and should be part of your daily intake.

It also prevents the risk of certain diseases like Stroke and Diabetes.

This is evidenced by the fact that a lot of old Asian folks are very hale and hearty people, rare to experience bad medical problems.

Both do not have a strong, distinct flavor, except for mild milkiness.

Yes, the word ‘sweet’ in the name is a misnomer.

Finally, these are cheap staples.

A kilogram that costs $3 on average can already feed 20 people.

That’s 15 cents per serving. Very few other items can be that low-cost yet high in nutritional value.

Despite all those similarities, the one difference is the reason why it can’t be just exchanged in recipes.

The regular kind comes from medium to long-grain rice.

This is the type cooked plain – usually steamed – and then topped with savory dishes.

The sweet variety (also referred to as ‘glutinous’) is from the short-grained variety.

This is stickier when cooked because it has more starch than the regular one.

Because of that, this makes for a better thickener in sauces or binder in ground meats.

The gummy consistency that is so pleasant to chew on also makes it the go-to variant for sweet dishes and desserts.

Because the long-grained kind is not sticky, it just won’t work for recipes that require the short-grained one.

And there is no way to tweak the former to work as the latter.

If you’re ready to go completely gluten-free or you’re just loving the chewy consistency of your desserts, you should always have this item in your kitchen.

It may not feel like it at first but this is a versatile ingredient, perfect for a whole lot of dishes.

Also, it’s not that difficult to find this nowadays.

A lot of Asian shops will have this on their shelves.

Here are some common brands:

But if you open your cupboard one day and can’t find this when you’re already in the middle of preparing something, all the substitutes listed above will work just as well.