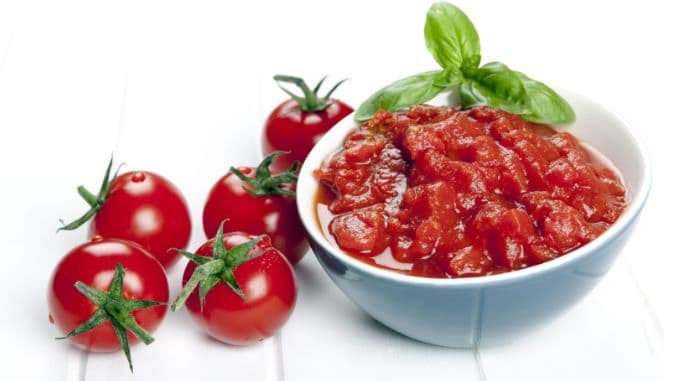 Here are the top 5 best substitutes for stewed tomatoes that you should know about:

For more information about how you can actually use these alternatives, keep reading below.

The Closest Alternatives to Stewed Tomatoes

If you don’t have the time to braise and simmer for half a day because dinner should be ready in an hour, don’t fret. You can use those fresh Plum or Romas or Beefsteak that you just bought this morning from the market.

As noted above, you can only use this replacement if you’re preparing salads, salsas, and even pizza because those won’t get completely ruined when you use the fresh variety.

Newly picked tomatoes are plumper and more succulent than the stewed version.

The latter has been reduced to half or less after hours of simmering and would take up lesser space. Therefore, use less of the alternative.

Also, try slicing or chopping this into smaller pieces.

You might also want to season the replacement with a bit more herbs and spices.

Because of the reduction process, stewed tomatoes are packed with flavor.

Around the time that tomatoes became widely accepted as a vegetable, canning came into being.

This has made this berry even more popular, especially during the winter and in places that do not have an abundance of it.

Traditional processing is relatively simple. Plum, Roma, and Big Beef – the favorite kind for canning because of their flavor and size – are boiled, peeled then placed in tins.

San Marzanos are now considered the crème de la crème and so highly coveted, only a few brands have the DOP (Designation of Protected Origin) to prove that these are grown in Italy’s Valle di Sarno.

Because these have been pre-cooked before tinning, you can pour it straight onto a pan with a bit of water and oil and let it simmer.

In 30 minutes or so, you’ve got something pretty close to stewed tomatoes!

It’s best to go for unseasoned variants so you can just add the herbs and spices you need for a particular recipe.

This is made by cooking the vegetable in water for several hours, letting the liquid content slowly evaporate.

After the skin and seeds are strained out, it goes back into the pot to be pureed then cooked even further until it is thick and heavy.

Traditionally, the Italians pour the thickened sauce on a wooden table under the sun to dry the paste into form-able balls.

These days, you can find this product sold in cans and tin foil packets.

A little goes a long way so don’t get large packs because it can go bad in the fridge.

If you’re only after the richness that it can give your dish – both in flavor and color – this is a good alternative.

The proportion noted above is just right because the paste version is packed with flavor.

You can even water it down a bit so it’s easier to work into your dish.

But if you are planning to make a marinara or Pomodoro and want to bite on chunks of the real thing, dice three to five pieces of Plum or Romas to a quarter cup of the paste.

Just like canned versions, the sauce is made in practically the same manner.

The vegetable is boiled, peeled, seeded, and then smoothly pureed. Some are packaged as plain tomato sauce while others are seasoned with basil pesto, parmesan cheese, sugar, and so on.

It’s best to go for unseasoned sauces than those with additional flavors.

It is easier to do a recipe when you’re starting from scratch than when you have to tweak it with other herbs and spices.

Ketchup is a very old condiment, even highlighted in 18th-century cookbooks in England and the United States.

However, this was made from mushrooms, shallots, and anchovies.

It took several decades before tomato was used.

And because many at the time were still wary of the fresh vegetable, the ketchup version was preferred more.

This is made by peeling, seeding, and mashing fresh Roma or Plum with salt, vinegar, and sugar.

The mixture is then seasoned with shallots, black pepper, allspice, nutmeg, and so many others, before boiling and simmering it into a thick and creamy sauce.

Except for the herbs and spices incorporated into the condiment, not much has changed in its production.

This could be the quickest alternative to our featured ingredient because it is the most ubiquitous tomato product.

Practically everyone has this in their fridge.

While it is an easy replacement because you probably have this in your kitchen, it can’t be used for a lot of dishes.

The trouble with using ketchup is that you need to do a whole lot of tweaking with the recipe because this has stronger flavors than the plain, stewed version.

Why Is It Such a Favorite?

First, it is so effortless to make.

It would be a wonder for many to know that it is one of five mother sauces in the French cuisine together with Bechamel, Velouté, Espagnole, and Hollandaise.

And let’s take it from the French – we all know how good they are with their food.

Next, it combines sweet, sour, and umami.

These three natural flavors are all packed in this beautifully plump fruit.

However, you will need some mad skills in the kitchen to balance these out to bring out the best in each.

We’ll get to this a bit later in the discussion.

But first, let’s take a minute to get to know this natural wonder more.

Let’s get one thing out of the way.

Botanically speaking, this is a fruit because it contains seeds.

However, nutritionists categorize this as a vegetable because it doesn’t contain a whole lot of fructose. Pumpkins and cucumbers are also botanical fruits but are considered vegetables from a nutritional point of view.

Interesting Fact: The US Supreme Court has ruled in favor of nutritionists. This is a vegetable, according to a decision made in 1893, but only for customs regulation.

Although most of us are familiar with at least five types of tomatoes (Roma, Beefsteak, Heirloom, Cherry, and Plum, just to name those five), there are dozens of varieties.

And it all started as a wild plant in the Andes.

The Aztecs are believed to be the first to have cultivated this as its modern name was derived from xitomatl which means plump fruit with a navel.

When the Spaniards came and conquered South America, they brought this fruit back home.

But many cultivated this as an ornamental plant.

It took a long while before it was accepted as food and, at one point, was even considered poisonous as it was cataloged under the nightshade family.

What a great mistake that was, since this is a real treat for the tastebuds.

Here are some recipes which highlight stewed tomatoes.

If you really want to have stewed tomatoes for dinner and you’ve got plump, fresh ones in your pantry, the other important ingredient you need is patience.

To be honest, making this is easy but it just takes a bit of time.

Below is possibly the easiest and quickest how-to: