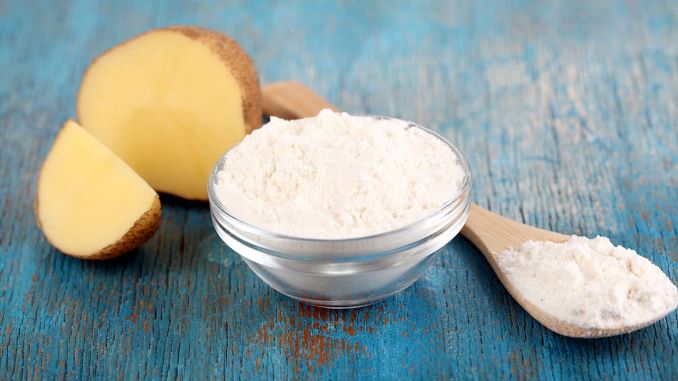 Here are the top 7 potato flour substitutes you should know about:

Want to discover how you can actually use these alternatives as well as their pros & cons?

Then you should read my following guide.

Related: List of Vegetables From A to Z (With Pictures)

If you don’t like the distinct tater flavor that it gives or you just can’t find this in your local grocery, you can swap it with certain items which may be in your cupboard already.

Take note though that substituting this is not that easy.

It will depend on how you plan to use it.

✓ for frying, as a thickener

Many often confuse the two, thinking it’s the same and swapping one for the other immediately.

The only time they realize these are different is when their dishes turn out bad.

While both are from the same root crop, the flour is made from whole, peeled taters, and the starch is made from the liquid of these tubers which is dried and then powdered.

As noted above, this can only be used for two types of recipes: a dry coating for fried foods and a thickening agent in slurry.

It can also be used for frying batters.

If you are using this in a batter for frying, add a bit more seasoning.

Starch made from this tuber is inherently tasteless compared to the flour variant.

If there is baking powder in the original mix, get rid of it if you’re using this ingredient.

✓ for frying, as a thickener

This is made from the extract of the corn’s endosperm.

It is turned into this smooth, fine powder after drying and pulverizing.

Generally speaking, this works the same way as tater starch.

However, this cannot tolerate high temperatures as well as the others so you need to be careful in using it.

If you’re going to use this in slurry, combine all of it in tepid water first before adding it to a mixture under heat, like boiling soup in a pot.

Stir the mixture continuously so that the starch won’t form into floating gummy balls.

Also, it would be best to use this as a dry coating for frying instead of in a batter.

✓ as a thickener, as a binder

Both are extracted from cassava, another tuber that is commonly found in tropical regions of the world.

These two tapioca products are well-liked in sweet desserts like puddings and savory dishes like vegetable pancakes and burger patties.

It gives these dishes a rich, thick consistency without altering the flavor of the dish.

Tapioca is a bit like cornstarch in that it should not be combined in hot water or mixtures or it will form unpleasantly.

Stir this in a bit of tepid water first until it has blended well then pour into the hotter mixture to get your desired result.

✓ as a thickener, as binder especially in low temperatures

Another tropical root veggie, this is now becoming a favorite in the kitchen because of its versatility.

Just like the other starches in the list, this is derived from the dried and powdered root crop.

It also works in the same way as the others.

But its biggest selling point is the fact that it doesn’t break down or gets altered in low temperatures.

If you were to make chicken nuggets with this as a binder, you don’t have to worry about icicles forming in the patty, ruining it once defrosted.

Although it’s stable in low temperatures, it can’t stand high ones.

Just like cornstarch, blend this in tepid water first.

To be honest, if you’re using potato flour as a binder for frozen patties, go for arrowroot powder instead.

It just works so much better.

✓ as a thickener, as a binder, for bread

All-Purpose Flour, as the name suggests, can be used for practically anything.

This is a blend of hard and soft wheat (percentage depends on what it will be used for).

Compared to our featured ingredient that is loved because of its organic and unprocessed value, APF does undergo a whole lot of processing like bleaching, oxidizing, and even fortification with vitamins and minerals.

But when it comes to baking bread, this is the winner.

Our featured ingredient holds in a lot of water compared to APF so, instead of changing the proportions of the dry components in the recipe, just a bit more wet ones (water, milk, oil, etc.).

If you still want the extra rise, keep the water where you soaked or boiled actual potatoes in and add that in your recipe instead of regular tap water.

✓ as a binder, for cakes and other pastries

This alternative is made from ground white or brown rice.

Because it undergoes just two simple steps (husking the grain and then grinding it to a fine powder), this is the least processed and the easiest to make at home.

If you want that light and airy texture, use this for cakes instead of APF.

Although this generally has a neutral flavor, it has a slight sweetness to it so you don’t have to add more refined sugar in your oven-baked confectionery.

However, this is not suitable in thickeners because it has a gritty mouth feel to it.

✓ for frying, as a thickener, as a binder, for bread, cakes, and other pastries

The consensus among experts is that this is the best alternative to our featured ingredient because it has been processed practically the same way as the flour but wasn’t ground into fine powder.

You need to be very careful in using this because a lot of the commercially available brands in the market today have added ingredients like butter, herbs, salt, and other spices.

This is because ready-to-cook flakes are often made into mashed spuds.

Just go for the ones labeled ‘dehydrated potatoes’ and has no other extra components.

A Short History of Potato and Its Flour

Now considered as one of the major crops in the world, the perennial tuber has been cultivated in 8000 – 5000 BC in Peru.

The Spaniards were the ones responsible for bringing it to Europe. Sir Walter Raleigh brought it to Ireland in 1589.

Nathaniel Butler, the Governor of Bermuda, gifted this to the people of Jamestown in 1621.

Soon thereafter, this mighty tuber is being grown all over the world.

And it’s not such a wonder why it’s a favorite: it’s easier to grow than oat and wheat, it is more filling and, unknown to most at the time, very nutritious.

In 1778, A.Parmentier created an all-tater feast for King Louis XIV in Paris.

His was the earliest known recipe of baked goods made from this root veggie.

And while we can only imagine how heavy this bread or cake might have been, many seemed to have continued the tradition of making tater-bread and refining it even further.

A more evolved version was featured in The English Bread Book written by Eliza Action in 1857.

Potato Flour in the Modern Kitchen

The famous APF (All Purpose Flour) is still the most popular for baked goods today.

However, many patisserie cooks use the tater variant because of the perks it adds to their pastries:

A good example of this is the original recipe of the Krispy Kreme donut.

Because of this, their donuts have that enviable delicate crispy exterior and soft, creamy interior.

Besides all those reasons, this is a gluten-free alternative to the wheat variant; good for those with Celiac disease and related conditions.

It is also more cost-effective than others and often the go-to ingredient for bread in the past during difficult times.

However, this does have the characteristic tater taste. It may be masked by sugar or cream but it will certainly be there.

If that doesn’t bother you too much, this is a great addition to your recipes.

The Two Types of Potato Flour

Planning to use this soon?

Know that this comes in two forms: in fine powder just like other flours and in flakes like the quick-cooking boxed mashed spuds.