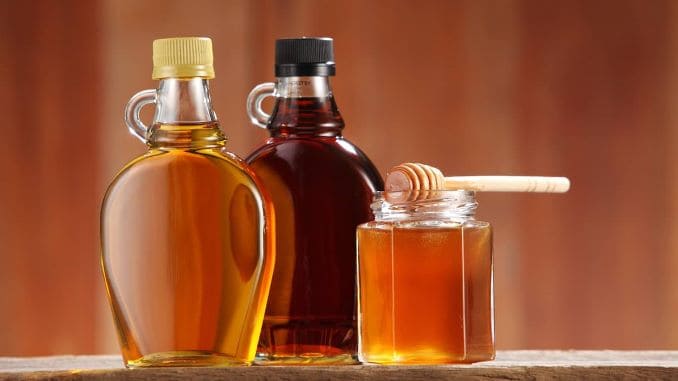 Here are the top 8 best brown rice syrup alternatives you should know about:

For more information about how you can actually use these alternatives, read my detailed guide below.

What to Substitute Brown Rice Syrup

There is a wide array of ingredients which you can use instead of this.

This is one of the best substitutes for brown rice syrup – or any kind of sweeteners for that matter – for its flavor and nutritional value.

Naturally produced, it is derived from nectar and ‘manufactured’ by bees as their food over the winter period.

This real healthy option has good levels of vitamins (namely the B-complex and C), minerals (calcium, potassium, niacin, riboflavin, magnesium, phosphorus, and zinc), and is packed with antioxidants.

This is a tad sweeter so it would be best to use just ¾ cup if the recipe calls for 1 cup of our featured food.

There are dozens of types of honey depending on the flower from which the bee got its nectar.

The GI and the nutritional values are pretty much the same but the flavor and color may vary.

For instance, Fireweed honey has a pale yellow shade with a peppery flavor while buckwheat honey has a rich, chocolatey hue and tastes like molasses.

Another all-natural sweetener, this is actually from the sap of a maple tree, boiled down to a caramelized reduction.

Ten gallons of maple sap are needed to make a quart of this pancake must-have.

Just like honey, this is rich in antioxidants and teeming with minerals – iron, manganese, and zinc, just to name a few.

The ratio for replacing brown rice with this one is 1 cup is to ¾ cup.

The former is still way sweeter than the latter, which has light chicory to intense ground coffee flavor undertones.

There are products advertised with the words ‘maple’ on the labels when it is merely treacle made from table sugar.

Check the labels well so you can make the right measurement when swapping ingredients.

One of the oldest versions of treacle ever used, molasses was first seen in a Portuguese text in the late 1500s and has continued to be popular up to the 19th century because it was cheaper than refined sugar.

It also has some vitamins and minerals and is said to increase good cholesterol which makes it a better choice.

With its distinct bitter aftertaste, slight smokiness, thick consistency, and almost jet-black color, this is a favorite in savory dishes like baked beans and barbecue sauces.

For every cup of our featured ingredient, use ½ a cup of molasses. Use a lesser amount if you do not like your dish to have a bitter aftertaste.

There are several varieties of molasses and, just like honey, comes in different colors and flavors.

Regular molasses has a reddish amber tone and is slightly acidic while Blackstrap is inky with a mingling salty and bitter taste.

If you’re a beer drinker, you’ve probably heard of barley malt and are now surprised that this can be made into a nutrient-packed sweetener.

This rich brown, incredibly thick, and sticky liquid is sugary but has a very distinct nutty, toasty, caramel-like flavor.

If the recipe calls for a cup of brown rice syrup, use ¾ cup of this substitute because it is a whole lot sweeter.

Lessen to ½ cup if you don’t like the malty taste.

Although all are syrupy and sticky, variants differ in color.

Some are amber with slight reddish tints while others are dark and chocolatey.

This can harden when kept in the fridge so try soaking the jar in hot water before using it.

Unknown to a lot of people, this is actually an ancient treacle together with honey and molasses.

This is made by boiling and blending dates, the fruit of the palm tree.

The dark, condensed fluid left after the insoluble parts are filtered out may not be as sweet as honey but has a complex, rich flavor.

It is incredibly nutritious too. Aside from the low GI rate, it is abundant in vitamins, minerals, amino acids, and antioxidants.

If the recipe calls for a cup of our featured sweetener, swap it with only three to four tablespoons of date nectar. You could mix in another tablespoon of water to dilute it.

Commercial brands from the Middle East (where dates originate from and are ubiquitous) may have the word ‘Silan’ on it, which is its local term.

This is derived from the agave plant – the very same species that tequila is made from.

Agave nectar has been quite popular in recent years among bartenders and baristas due to its neutral flavor – almost like honey but with lesser fruity notes.

It also has a thinner consistency that quickly dissolves even in cold drinks.

For every cup of brown rice sweetener in a recipe, use half a cup of agave nectar.

Some have lauded its health benefits, particularly its low glycemic index.

But that is a bit deceptive because most of its sugar is fructose.

That makes it worse because it is linked to Type 2 Diabetes and various liver problems.

Many cooks say that this is the best substitute for brown rice syrup because it has the same level of sweetness, consistency, and color – especially the toasted, amber-colored kinds which are vanilla-flavored.

It is also widely available because it is the favorite for making candies, jams, jellies, and a wide array of baked goods, just to name a few.

The replacement ratio is 1:1.

If the dish requires a cup of our featured sweetener, use the same amount of corn syrup.

HFCS or High Fructose Corn Sugar is already found in almost all processed foods – even those which are advertised as healthy options.

This is one of the most common causes of Type 2 Diabetes. Use sparingly.

As the name implies, this is the simplest type of treacle that you can make.

Boil one cup of table sugar in one cup of water and let it condense to a thick syrup.

It won’t have the complexity in flavor or creaminess of the other possible substitutes noted above but you won’t need to go out and scrounge the grocery aisles for this.

The replacement ratio is also 1:1.

You can use white sugar if you want it sweeter but lighter in color.

Go for brown sugar if you want that deep caramel flavor.

You can also mix in flavorings to this like vanilla or almond if the recipe calls for that.

The sweetener is made by exposing the rice to natural enzymes, allowing it to break down from starch to simpler sugars – 52% of maltotriose, 45% of maltose, and 3% of glucose.

The liquid is then boiled and reduced to this extremely light amber, viscous liquid.

This has become quite a sensation recently because it is vegan and is gluten-free.

It is also more favored over fructose-based treacles that trigger type 2 Diabetes.

Some people also like it because it’s not as saccharine as table sugar and other sweeteners.

And for some reason, many believe that that’s a good thing.

But science has evidence against that.

Its glycemic index, the gauge of food’s effect on the spike of blood sugar, is extremely high at 98.

Remember the breakdown of simple sugars mentioned above?

Nutritionists will tell you that all those are just glucose with a different number of molecules.

And while brown rice IS very nutritious, this sugary form is not. It has negligible amounts of vitamins and minerals.

On top of it all, this is one of the most expensive sweeteners in liquid form in the market today.

The Skinny on Brown Rice Syrup… And All Its Substitutes

We all crave something sweet now and then, whether that’s a piece of chocolate or a dessert you plan to make yourself.

There is absolutely nothing wrong with using brown rice syrup or any of the substitutes listed above.

But try to do this occasionally.

Remember that everything done or taken in excess will be bad for you.