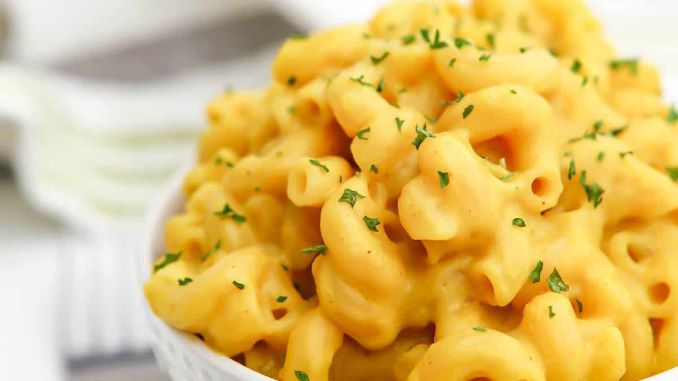 Still searching for the best milk substitute for Mac and Cheese? Here are 20 of them for you to choose from:

Now, do you want to know how you can actually use these alternatives?

The Best Substitutes for Milk in Mac & Cheese

You know it, right?

The macaroni is the base.

The cheese is what gives the dish flavor and color. Whole milk puts it all together, making it creamy and scrumptious.

If you’re one of those people who just won’t make this without milk, then go ahead and drive to the closest supermarket so you can get a gallon.

But if you’re OK with a bit of experimentation, or you’re just hungry and don’t have the time for that quick grocery run, here are some substitutes that will work well for your Mac and Cheese, whether that’s gourmet or boxed.

Admittedly, this alternative feels more conceivable if you’re using the boxed variant because the dark yellow powder inside it already has whey and milkfat.

On top of that, butter is a dairy product so you’re not losing this important ingredient.

This is trickier when you’re making it from scratch.

If that’s the case, it’s best to go for fresh, fatty cheeses so the flavor will still be there.

Go for Mozzarella, Feta, Halloumi, Paneer, and Ricotta, just to name a few.

How to Substitute (per cup of milk)
If you’re using the instant version, use half a measure of water (since this is what you will use to cook the pasta) mixed with the same amount of melted butter.

If you’re cooking from scratch, leave a few tablespoons of water and half a cup of butter.

Add a bit more mozzarella or ricotta until you find the flavor and consistency satisfactory.

Chicken broth and pasta are a good match.

And don’t worry about the third must-have ingredient because it works with practically everything.

This may feel a bit odd to most people but this will work just fine.

It will not have the usual taste that you’re expecting but it will still have that comfort factor.

How to Substitute
The ratio would be 1:1. This won’t be as thick or creamy though so you might want to make a slurry from flour and add that in.

You could also sprinkle a bit more Parmesan to bulk it up more.

If, for whatever reason, you’ve got milk from goat, sheep, or buffaloes, go ahead and use that as a replacement.

Expect that there will be a difference in taste.

Goat’s tend to be a little more barnyard (but not unpleasant). Sheep’s can be fattier. Buffalo’s is richer in mouthfeel but milder in flavor.

If you don’t mind these distinctions, you’ve got a great replacement for our featured ingredient.

How to Substitute
Because both are practically the same dairy products, the proportion is simply 1:1.

If you don’t like adding just water and butter, aren’t too convinced about the effectiveness of chicken broth, and think goat’s or buffalo’s milk is too exotic for your taste, you could grab one of these dairy products instead.

Chances are, you’ve got one or two of these sitting in your fridge.

Butter is first on this list only because a lot of people have this at home.

But if you have cream cheese, go for this instead.

It has the same consistency as Brie, Feta, and Gorgonzola but it has a milder, fresher flavor which is perfect for our featured dish.

How to Substitute (for every cup required)

It’s still measure for measure. You can go without the butter because this is already quite rich and fatty.

This may seem like an extra special ingredient because many TV chefs use this in their recipes but it’s just a mixture of our featured ingredient and heavy cream.

The perfect middle ground, this is richer than the former but not too condensed as the latter.

How to Substitute
Ideally, just use ¾ for every cup required of our featured ingredient.
But you can also go full measure if you like. You won’t regret that decision.

This dairy product is third in this list only because of its tartness.

However, it is quite rich so it will make for a good replacement to our featured ingredient.

You could mix in more Parmesan or Pecorino to offset the sourness of this alternative.

How to Substitute
Use half a cup instead. Add a bit of water so that it’s easier to incorporate.
Also, cool the dish down before mixing it in to prevent it from curdling.

Because of its consistency and tartness, this is almost like sour cream.

The difference lies in the fat content – yogurt has less.

If you want something richer, go for Greek yogurt.

However, this is still tangy so you might want to balance the flavors with Parmesan or Manchego.

How to Substitute
Since this is interchangeable with sour cream, use half a cup as well.

Because this is incredibly high in fat, you really won’t need butter for this anymore.

However, this may dilute the color of your dish so using orange Cheddar or Red Leicester may be a good idea.

How to Substitute
Use just half of what’s originally in the recipe since this is quite rich. For easier mixing, add a bit of water.

This is our featured ingredient processed even more by removing at least 60% of its water content to make its shelf life longer.

Because it’s almost concentrated, this is often used for cooking soups.

How to Substitute:
Use just half a cup. The other half would be water.

Because it has a longer shelf life, this is used a lot in homes.

You can add it straight into the dishes or mix it with water first.

How to substitute:
For Mac and Cheese, it’s best to mix this in with water first.

It’s also possible that you’re not into dairy because you’re vegan.

In that case, here are some options which you can try.

All these are kinds of milk and creams that have been extracted from grains, nuts, and other plants.

Add the same amount required. The only problem with this option is its strong flavor. If you mind that, dilute it with water.

Although this is made from nuts, it has a lovely neutral flavor that wouldn’t change the recipe so much. Use the same amount as our featured ingredient.

Just like almond, this is also quite the same as the missing ingredient so the same proportion should be added when swapping it with this.

This is another nut-based product but more expensive than almond and cashew. The replacement ratio is 1:1.

The ratio for using this is 1:1. It is also quite expensive, but oh so delicious.

Of all alternatives, this is one of the most common vegan options because it’s mild-tasting and very affordable. Use the same amount for this as well.

The replacement ratio is 1:1 of the unsweetened version.

This is from grain but it has a nutty flavor. Mix in the same amount as needed.

This is possibly the closest to our featured ingredient in terms of flavor so the substitution ratio is also 1:1

This isn’t that well-known but it’s becoming more and more common because of its earthy flavor and thick consistency. Use the same measure but add a bit of sugar because it can be slightly bitter.

The Basic Background of a Delectable Dish

It’s hard to pinpoint who came up with the first recipe or where it was made.

Pasta is from Italy. Cheese is made all over Europe. Milk is found everywhere.

According to historians, a recipe that involves those three is found scribbled down somewhere in Northern Europe in 1769.

Thomas Jefferson, fascinated by pasta dishes in France when he was ambassador, brought recipes back to the United States.

But it was during the Great Depression that this became widely available to the masses.

Kraft created the boxed variant in 1937 and sold it for 19 cents.

Its popularity continued to grow until the second World War when fresh produce was in short supply.

Chefs, as they are wont to do, are making improvements on the dish, restoring it to its former glory.

The pasta needs to be freshly made by hand.

A fancy combination of Camembert, Asiago, and Gouda is a must.

Chefs will always try something new. And those will be delicious, without a doubt.

But there will always be something satisfying about the basics:

Season with salt, the smallest sprinkling of pepper.