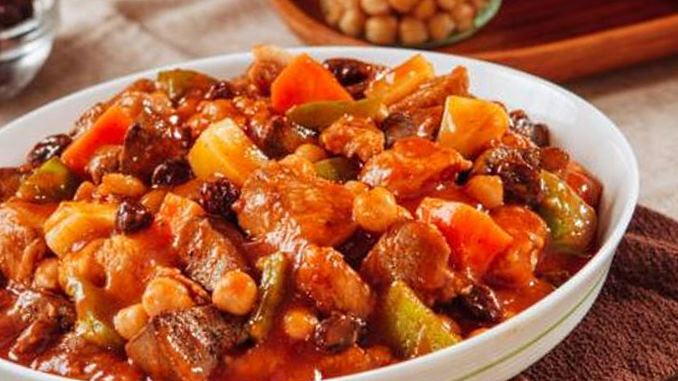 Generally, both Menudo and Mechado are tomato sauce-based Pinoy Ulam favorites. However, because their appearance looks quite similar, it is often bewildering for those unfamiliar with Filipino cuisine. So, this article will provide detailed information about the similarities and differences of Menudo vs Mechado, along with related FAQs.

The first must-mention similarity of these two dishes is their origin. In detail, they both come from the Philippines.

It is worth noting that in the U.S, Menudo is usually known as a spicy Mexican soup prepared with tripe pieces in a chili-infused broth. Yet, the mentioned Menudo in this article is the Filipino version of a colorful stew.

At first look, people find it the same in their appearance. And the reason why people frequently mix up Menudo and Mechado is their tomato-based recipe.

Another significant similarity between these two recipes is the preparation method. In detail, they are both prepared by stewing all ingredients with tomato sauce until the meats become well-tender.

3 Main Differences Between Menudo Vs Mechado

The first noticeable difference between Menudo and Mechado is the type of meat used in the recipe. In detail, the former is prepared with pork or chicken, especially with the contribution of livers to create a more characteristic flavor in this dish.

Meanwhile, the type of meat used in Mechado is beef stuffed with a thick layer of pork fat in the middle. Otherwise, in some recipes, they use larded beef instead. Thus, this helps the dish add more flavor while also keeping it moist and tender.

Honestly, both ingredients in these two dishes are easy to find and inexpensive. Yet, they use many different veggies and additional ingredients to create a unique flavor.

Although both two dishes use potato and carrot, the key ingredients of Mechado are soy sauce and calamansi fruits to create a pleasant aroma. Besides, Menudo becomes more eye-catching with the color of bell peppers and raisins, giving this stew a balanced taste of sweetness.

As mentioned before, the cooking technique of Menudo and Mechado is stewing. Yet, of course, they are associated with different processes of preparation:

How To Serve And Store Menudo

Menudo is highly recommended as a main dish used with steamed rice for lunch or dinner. Moreover, it also works well as a sandwich filling for pandesal or sliced bread as a lunchtime snack or on-the-go meal.

For Menudo leftovers, allow them to cool entirely and put them in an airtight container. Thus, you can keep them in the refrigerator for three days or up to 2 months in the freezer.

To reheat, place in a pot and cook over low heat or microwave at 2- to 3-minute intervals until entirely heated.

What Does Mechado Mean?

Because the larded beef resembles a candle, the word Mechado is derived from the Spanish term mecha, which means “wick.” The name was accepted as “mitsa” in the Filipino language; however, the spelling “mitsado” for the meal is unusual and rarely encountered.

What’s The Difference Between Mechado And Kaldereta?

Although the sauce of these two dishes is from tomatoes, kaldereta sauce is more complex by liver spread or coconut milk. The Mechado is seasoned with soy sauce. Sometimes, vinegar is added to emphasize the sourness of the flavor. However, the most prominent taste difference between the Mechado and kaldereta is the bell peppers.

Meat grinders are arguably one of the most versatile kitchen appliances you can lay your hands on, thanks to their various purposes in cooking. And the good thing is that sometimes, you do not have...

If you have a pet or two at home, it is essential that you keep them well-fed all day long. However, buying already processed food can be quite tricky, as you never know what goes into these...