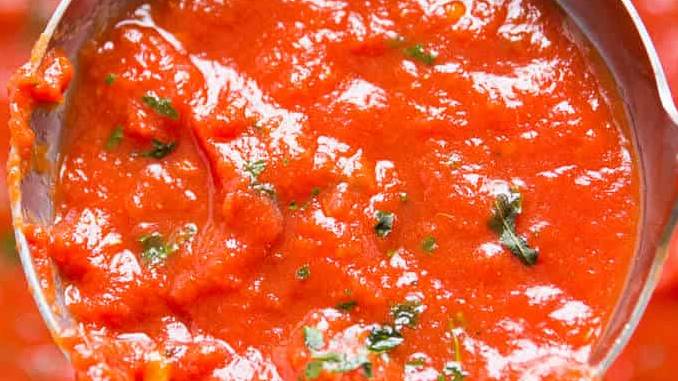 Marinara and spaghetti sauce are both tomato-based. Thus, many people misunderstand that they are identical. Some even use the two terms interchangeably.

However, they differ in several aspects. Find out the critical differences between marinara vs spaghetti sauce in this article to make an informed decision!

What Is Marinara Sauce?

This marinara sauce has a long history. Since chef Antonio Latini invented and published the recipe in the late 17 century, this recipe has gradually gained impressive popularity. Nowadays, you can witness several variations of it all around.

Yet, the essential ingredients remain the same. Tomatoes, garlic, herbs, and onions are all crucial to creating its unique flavor.

Although people in a few Italian villages may add some olives, spices, capers, or even wine to the mixture, these cannot change the nature of this great recipe. Also, it is vital to emphasize that the proper formula never contains any meat or seafood.

The conventional type in Italy is pretty thin compared to the texture of its corresponding variation in the U.S. Moreover, while the Italian version does not have cheese or vegetables, American people prefer adding some cheese or olive oil to the mix.

Besides, this type is usually used in dishes such as spaghetti or vermicelli.

What Is Spaghetti Sauce?

This sauce is related to spaghetti – a long, solid, and thin type of pasta. Hence, any sauce that goes with it can be generally considered as a “spaghetti sauce.”

Considering you can serve your pasta with various sauces, several choices such as alfredo, pesto, or arrabbiata are available.

Yet, there are some common characteristics among all types. They are the thickness, the base, and the ingredients.

Most types of this are thicker than others because it is a mixture of cheese, vegetables, meat, and cream. Besides, it utilizes tomato-based paste with a lot of ground meat and cheese.

If you use marinara for cooking this specific kind of pasta, it can also be regarded as one type of spaghetti sauce. Nevertheless, since it does not have meat or seafood, you may prefer keeping your vegetarian friends to enjoy the authentic flavor.

How Are They Different In Flavor?

As the spaghetti sauce recipe includes more ingredients, it becomes richer and meatier in flavor. Thus, you should combine it with bland noodles.

Its rich flavor can make your dish impressively tasty. Besides, using it this way helps you experience its authentic flavor.

On the other hand, marinara sauce, utilizing herbs, garlic, and onions, brings you a different experience. With the added spices and herby aroma, it tastes a bit more complex.

Besides, as its texture is pretty light, it allows you to appreciate each ingredient’s flavor better. Therefore, experts recommend using fresh ingredients to make food with it since their freshness will shine significantly.

Are Both Prepared The Same Way?

Even though they have some steps in common, the preparations are distinguishable.

You may purchase canned crushed tomatoes, garlic, dried spices, fresh herbs, onion, and black pepper for marinara. First, heat minced garlic and white onion pieces in the pan, then wait a minute before adding the sauce base. Then, put some black pepper and herbs into the mixture. After that, you just need to simmer it well until its consistency becomes perfect.

But the process of making spaghetti sauce turns out to be a little more complicated. After sauteing garlic and onions, heat the meat and other ingredients such as carrots and green beans instead of adding the sauce. Only when the meat becomes half cooked do you start pouring the tomato sauce into the pan.

The next step, simmering. Wait until all of your ingredients combine well. For the final touches, you can add some spices and herbs accordingly to your preferences.

So, if you only have about 10 minutes to cook dinner, it is recommended to go for the marinara sauce instead.

Can You Substitute Between Them?

Definitely. As marinara is also tomato-based, it can be a reasonable substitute for spaghetti sauce. Yet, you may want to add some meat, cheese, or seafood since its nature is vegetarian.

On the other hand, it is not so simple to replace the marinara sauce with spaghetti sauce. Some of its varieties are pesto-based or white-based. Thus, they are not suitable for substitution.

Unfortunately, because almost all of the spaghetti sauce contains beef, pork, or some other type of meat, the substitutes may not present you with the original flavor of marinara.

Is Marinara The Same As Tomato Sauce?

Not really. Although both use tomato as the base, they differ in some aspects.

Based on the sauce tomat from France, tomato sauce is the reduced combination of salt pork, bacon, onions, carrots, tomatoes, bay leaves, garlic, chicken stock, a roux (the mixture of flour and butter), and your favorite type of meat.

Also, it takes a lot more time to prepare since you have to simmer it for several hours until it reaches its most incredible flavor.

Thus, in comparison to marinara, tomato one is richer and thicker. Besides, it is usually ladled over pasta, breakfast biscuits, or chicken cacciatore.

How Marinara Sauce Got Its Name?

Marinara’s name derives from the Italian word marinai, which means mariners or sailors.

Though several theories explain why it is named after sailors, one widely believed theory attributes its name to its preservability. Containing a few ingredients except for meat or fish, the sauce will not be spoiled quickly. Thus, mariners can bring it on any long journey without worries.

Yes, it is. A serving provides you with around 82 calories. In addition, it serves as a rich source of vitamins and minerals, including vitamin C, iron, and calcium. Those are truly beneficial for people who have diabetes. Moreover, research also shows that it is low in fat and high in lycopene. Thus, consuming it can have surprisingly positive impacts on preventing cancers.

When comparing these two, the former can be prepared with a few ingredients and cooked within 10 minutes. Hence, it is more watery and thinner than the latter, which is made from various ingredients such as cream, cheese, and meat.

Nevertheless, it is vital to suggest that marinara sauce can reach the thick texture of spaghetti sauce if you reduce it for a longer time or add some cheese and vegetables.