Even if you’re a sushi novice, there’s a good chance you’ve heard of sashimi.

Sashimi is thinly sliced raw fish, and it can be found in most sushi rolls.

But how good is it? Is it worth the price?

In this blog post, I’ll answer all your questions about sashimi and give you some interesting things to know about this delicacy.

So read on to learn more.

How good is sashimi?

Sashimi is often referred to as the “crème de la crème” of sushi, and for good reason.

It is made with the freshest and highest quality fish, and it is usually served as the first course in a sushi meal.

This means that you can expect sashimi to be both delicious and expensive.

For the taste, sashimi is less about the fish itself and more about the freshness of the fish.

The best sashimi is made with fish that has been caught the same day it is served.

This means that the fish is not only fresh but also very tender.

The slicing of the fish is also important for the taste of sashimi.

The slices should be thin so that the fish melts in your mouth.

While the price of sashimi can vary depending on the type of fish and the restaurant, you can expect to pay around $15-$20 for a plate of sashimi.

Is it worth it?

That’s up to you to decide.

But if you’re looking for a truly luxurious sushi experience, then sashimi is definitely the way to go.

The health benefits of eating sashimi 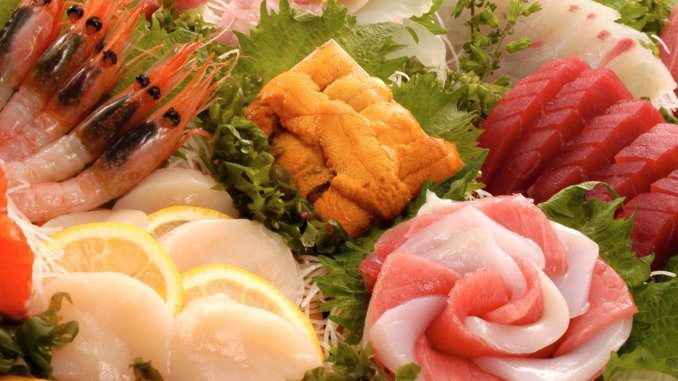 While the idea of eating raw fish may sound unappetizing to some, sashimi is actually a delicious and healthy dish.

The fish is usually prepared with simple seasonings like soy sauce, wasabi, and ginger, which allows the natural flavor of the fish to shine through.

In addition to being delicious, sashimi is also packed with nutrients.

Fish is an excellent source of protein, omega-3 fatty acids, and vitamins A and D.

Furthermore, eating sashimi has been linked with a number of health benefits, such as reduced inflammation, improved heart health, and better brain function.

That means that not only is sashimi delicious, but it’s also good for you.

While there are many different types of fish that can be used for sashimi, some of the most popular options include tuna, salmon, and yellowtail.

When it comes to tuna, the two most common types used for sashimi are bluefin and bigeye.

Bluefin tuna is prized for its rich flavor and fatty texture, while bigeye tuna is considered to be slightly sweeter and more delicate.

Salmon is another popular option for sashimi, and it can be either wild-caught or farm-raised.

The most common type of wild-caught salmon used for sashimi is sockeye salmon, which has a bright red flesh and a firm texture.

For those looking for a more mild-tasting fish, yellowtail is often a good choice.

Yellowtail is a type of jackfish that is found in both the Pacific and Atlantic oceans.

It has a relatively light flavor with a slightly sweet undertone.

And my personal choice is often tuna.

It’s because I like the rich flavor and the fatty texture.

How to store and serve sashimi

It’s important to note that sashimi should be eaten as soon as possible after it is made.

This is because the fish will begin to deteriorate quickly, and the quality will diminish.

If you must store sashimi, do so in the refrigerator, and eat it within 24 hours.

When it comes to serving sashimi, there are a few things to keep in mind.

First, sashimi should be served with chopsticks.

It is considered bad manners to use your hands to eat sashimi.

Second, you should dip the fish into soy sauce before eating it.

You can do this by using a small dish or by pouring soy sauce directly onto your plate.

And lastly, be sure to eat the ginger and wasabi that are typically served with sashimi.

These condiments are not only delicious, but they also help to cleanse the palate between bites.

Which countries enjoy sashimi the most?

Sashimi is a popular dish in many countries, but it is particularly popular in Japan, where it originated.

In addition to Japan, sashimi is also widely consumed in Korea, China, and Taiwan.

This is likely due to the growing popularity of sushi and the increasing availability of fresh fish.

How to make sashimi at home

Making sashimi at home is not as difficult as you might think.

The most important thing is to start with high-quality, fresh fish.

Once you have your fish, the next step is to remove the skin and any bones.

After that, you’ll need to cut the fish into thin slices.

The thickness of the slices will depend on your personal preference, but they should be no more than a few millimeters thick.

Once the fish is sliced, it’s time to season it.

The most common seasonings used for sashimi are soy sauce, wasabi, and ginger.

To season the fish, simply dip it in soy sauce or pour soy sauce over it.

Then, add a small amount of wasabi and ginger to your liking.

Your sashimi is now ready to be enjoyed.

In summary, sashimi really tastes good and it’s also good for you.

So if you’re looking for a luxurious and healthy sushi experience, be sure to give sashimi a try.