Throughout history, aspects related to Japan have always been controversial topics, even in the food field.

For example, when mentioning the topic of nigiri vs sashimi, many people claim that they never try them because they are simply raw fish, especially those from Western culture.

However, raw fish meat served in these 2 recipes is prepared in particular ways to create the unique taste you can not forget once tried.

So, what exactly are the differences when it comes to this debate, and which one should be tried first?

In this detailed guide, I will walk you through it all.

Nigiri is the most popular type of traditional sushi.

It’s essentially a small rice cake topped with some kind of fish or seafood and served with soy sauce.

Nigiri’s popularity is due to its simplicity.

The dish is both easy to make and eat, which means it’s perfect for a quick bite or party finger food.

Nigiri is often described as having a buttery flavor.

This is because the fish used for nigiri tend to be fattier which gives it an almost creamy consistency when eaten with rice.

The texture can also be best described as firm and smooth.

Nigiri pairs well with different kinds of condiments including wasabi, soy sauce, and pickled ginger when you eat it.

Sashimi is a type of Japanese dish that consists only of the sliced raw preparation of certain kinds of fish or another seafood filling.

Like nigiri, you can eat it with ginger soy sauce.

It is popularly served with a side of wasabi and pickled ginger.

Since the dish is simply slices of meat, it is more expensive than nigiri, which means it’s typically featured in upscale Japanese restaurants.

How are they different from each other?

In Japan, slicing fish is a skill that has been passed down for generations.

A good Japanese chef is very particular about his art and prefers to spend more time creating a beautiful presentation than serving as many orders as possible.

To make sashimi, he must carefully slice the meat into thin slices.

The cuts are usually made with respect to the standard orientation of muscle fibers.

This technique ensures that each slice has a balanced thickness allowing for even cooking.

Sushi restaurants often provide their customers with complimentary salt, chives, and other herbs to mix with their soy sauce.

Nigiri, on the other hand, is simpler to prepare as it only requires a proper mold and some sushi rice.

This is not to say that nigiri lacks an artistic touch.

On the contrary, it’s also carefully prepared and presented as sashimi.

The maker must balance the rice ball on his palm while holding it with the fish.

This allows him to properly cut and season the fish before placing it on top of the rice.

How are they served?

Although both types of traditional Japanese dishes are served with soy sauce, nigiri is served with the sauce already on top of the rice.

Sashimi, on the other hand, is commonly served with wasabi and pickled ginger to enhance its flavor.

How are they eaten?

Nigiri is often eaten with chopsticks while sashimi is usually eaten with your hands.

If you’re in an upscale Japanese restaurant, it’s best not to eat sashimi with your hands.

Like fish knives in the West, chopsticks are also used when eating sashimi.

The knife shape is never actually touched by diners.

Instead, the fish is sliced into small bite-sized pieces before being served to guests.

How to order them?

If you’re unsure of how to order sushi, sashimi, nigiri, never fear.

It’s not as difficult as it may seem at first glance.

Here are the steps:

Before placing an order, it’s important to know what kind of fish is in season.

Seafood changes depending on where they’re caught.

This is because they’re subject to different water temperatures all year round.

A good sushi restaurant will indicate the type of fish used in each nigiri or sashimi dish on its menu, so take a look before placing your order.

Is sashimi better or vice versa?

This would largely depend on your personal preferences.

Some people prefer the simplicity of sashimi while others enjoy the richer flavor of nigiri.

I am a fan of nigiri as I feel that the flavors of both fish and rice complement each other.

In this case, it’s best not to think of one as being better than the other since they’re really two different types of dishes from the same family.

If you want to enjoy the flavors of both nigiri and sashimi, consider ordering Chirashi.

It’s one way for diners to experience the best of both worlds without having to choose between the two. 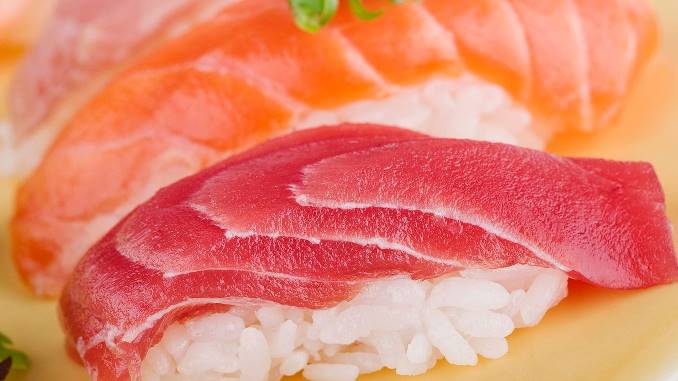 What fishes are required to make nigiri?

When it comes to this topic, you should know that nigiri is best enjoyed with fish that’s in season.

The rule of thumb when it comes to fish in Japan is that they’re in season during colder months.

This is because their meat tends to be thicker and richer when the water temperature drops.

Some examples of this include bluefin tuna, French mackerel, and salmon roe.

It can also be made with sea urchins or eggs from other fish such as the yellowtail.

What toppings should I use on my rolls?

In addition to fish, nigiri can also be topped with other ingredients such as egg, cheese, or vegetables.

Cheese is used as a topping for nigiri sushi rolls.

In fact, the process of making rolled cheese nigiri is one way how chefs can show off their creativity as well as culinary skill.

What are the different types of used rice for these recipes?

Sushi rice is crucial for sushi.

It’s worth noting that not all sushi restaurants use the same type of rice when they make their dishes.

Some mix different kinds of rice while others prefer to stick with one instead.

There are also other variations including how much vinegar and sugar is used in each batch.

The three main types of Japanese rice used in sushi are Koshihikari, Akitakomachi, and Hitomebore.

Each one is unique in its own way.

Koshihikari rice is admired for its great flavor and consistency when it comes to texture.

It’s also the most expensive of the three kinds of Japanese rice.

Akitakomachi rice is the most popular kind of sushi rice in Japan because it’s naturally sweeter than the rest.

Hitomebore rice is well known for its high starch content, which makes it perfect for making sushi.

It’s also fairly easy to grow and thus cheaper than Koshihikari or Akitakomachi.

How many calories are in a piece of nigiri?

A piece of nigiri sushi will contain around 20 to 30 calories.

This is because it’s made using fresh raw fish, which has very few calories.

What kind of fish should I order for the freshest sushi?

Choosing a fish that’s fresh can sometimes be daunting as many types are available at your local sushi bar.

Some people assume that the fattier fishes are fresher, but this isn’t always the case.

Here is a list of recommended fish to order when you go out for sushi:

Do I need to refrigerate salmon when using it in tofu-related recipes?

You can use salmon for tofu nigiri even if the fish has already been cooked and refrigerated.

As long as you used fresh ingredients to make your recipe, there’s no need to worry about food safety.

Salmon is edible as soon as it’s fully cooked through and cooled down.

Keep in mind that the quality of the sliced raw fish may decline as time passes, especially if it has been refrigerated for a long period of time.

It’s best to use leftover salmon within two days after cooking and storing it in an airtight container in the fridge.

What type of sushi vinegar do I need?

You can purchase ready-made sushi vinegar from any Japanese grocery store or online.

You can also make sushi vinegar using rice vinegar and sugar as long as you follow the correct measurements for your desired flavor.

Sushi requires a distinctive kind of rice which is why it’s best to source different ingredients from a Japanese market or online instead of buying them locally at an Asian supermarket.

It’s also worth noting that not all Asian grocery stores carry the same ingredients that are generally used for sushi.

That’s it for this hot topic about sashimi and nigiri.

They are both traditional Japanese dishes enjoyed by people all over the world.

Both can be prepared with a wide variety of fish based on what’s in season at any given time.

Sushi bars will often indicate which type of fish is used for each dish through its menu, making it easy for diners to find what they’re looking for.

Nigiri and sashimi are also prepared with different fish, soy sauce, and other ingredients that pair well with their flavors.

For those who enjoy eating fish but can’t decide which one to order, Chirashi is a good option as it combines the flavors of both nigiri and sashimi into one dish.