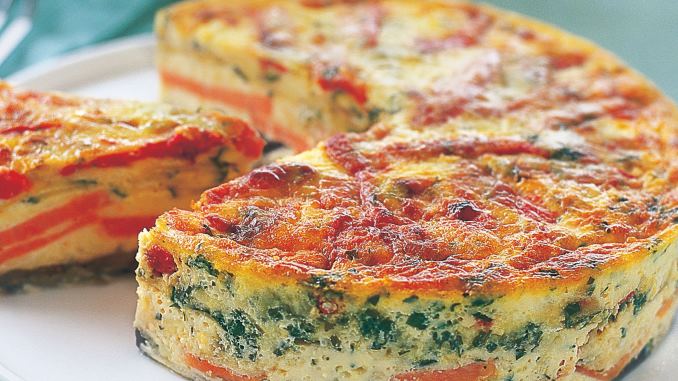 Egg dishes are among the most versatile meals to prepare. It’s also an excellent way to use up a lot of eggs to get the protein fix. As a result, frittata and souffle receive a lot of attention.

Yet, are they the same? Don’t worry. This article will provide detailed differences between frittata and souffle for you to decide the most suitable one.

Overview Of Frittata And Souffle

Frittata is an Italian word that loosely translates to “fried.” In detail, it is a dish made from eggs, which is similar to an omelet, crustless quiche, or scrambled eggs. Yet, it is filled with many additional ingredients such as meats, cheeses, or veggies.

Meanwhile, a souffle is a baked egg-based dish with a variety of additional toppings. Its name is derived from a French verb meaning “to blow”, “to inflate”, or “to puff up.”

In addition, it comes in both sweet and savory versions:

3 Key Differences Between Frittata Vs Souffle

The most mentioned difference on the internet is their origin. In detail, the frittata originated from Italy. Outside of Italy, it was equal to the omelet until the mid-1950s. Its recipe has developed over the last fifty years, leading to a diversity of versions.

Regardless of the variation, one component is always mixed with beaten raw eggs mixture and slow-cooked on both sides. Frittata recipe breakfast is now served not just for breakfast but also before lunch or supper in Italy.

Meanwhile, the souffle originated from France and was first introduced in 1742 by a master cook Vincent La Chapelle. However, since the early 19th century, it has just become popular across the world.

These two recipes all start the same with eggs, milk, and some fillings. However, the most significant distinction between them is that how the eggs are prepared:

Furthermore, frittatas are initially cooked for about 1-2 minutes on the stovetop. Then, place the pan in the oven at 400 degrees and bake for 10-12 minutes, until eggs are set and fully cooked. On the other hand, souffles are generally baked solely in the oven. As a result, the time to bake it is longer, about 30-40 minutes.

The finest frittatas have a light, fluffy, and bouncy texture. But if you leave it in the oven for too long, you’ll end up with a version that’s dry, rubbery, and crumbly.

However, for souffles, whisking egg whites traps air into the mixture. The egg white protein forms bubbles by sealing around pockets of air. Because the fat in egg yolks stops those bubbles from developing, they are separated. Those air bubbles grow in the oven, resulting in its conic cloud-like appearance. Thus, a souffle is more puffy and fluffy than a frittata.

Is A Frittata The Same As An Omelet?

Honestly, both of them are similar in some aspects.

Frittata is also known as an Italian open-faced omelet made with eggs and dairy and topped with various additional ingredients. However, it is gently cooked over low heat, whereas an omelet is swiftly prepared over high heat.

Furthermore, omelets are often served fresh off the stove. On the contrary, frittatas are generally served at room temperature, making them ideal for brunches or larger gatherings.

Does A Souffle Have A Crust?

When it comes to an egg-based dish with a crust, quiche sticks out the most. Many individuals also get souffle and quiche mixed up. However, the former usually contains milk, while the latter uses cream. As a result, a souffle doesn’t have any crust, although a regular quiche does contain a savory pastry crust.

Why Is My Frittata Flat?

A common mistake in preparing frittatas is overcooking the eggs, which causes them to be flat. Therefore, accurate timing is essential. Yet, don’t panic. Here is a tip for perfectly cooked eggs: