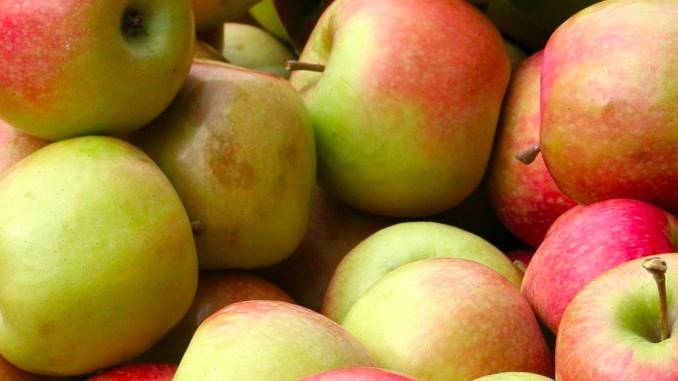 Did you know? It’s advisable to put ethylene-producing fruits such as apple, banana, blueberry, mango, and papaya away from others to minimize the risk of overripening.

Most food enthusiasts are familiar with the saying: “One bad apple spoils the whole basket.” However, not everyone can identify the reason behind this common phenomenon.

If you are one of them, don’t worry! In this detailed article, we’ll expand your knowledge about ethylene-producing fruits and the optimal methods to maintain their peak quality.

Do All Fruits Give Off Ethylene?

First, it’s worth discovering what ethylene is. Ethylene is an internally generated hormone that triggers and stimulates the ripening process. It is released by rapidly growing flowers, roots, tissue, and ripe fruit in general.

Unlike other plant enzymes that move through the plant vascular system, ethylene is a gaseous compound, which is emitted and transferred through the air.

Generally speaking, ethylene is produced by almost all types of fruits, albeit at varying degrees. Fruits can be classified into 2 main categories: climacteric and non-climacteric based on their ethylene levels.

Climacteric fruits produce high levels of ethylene even after being removed from plants, and therefore, can ripen over time. On the contrary, non-climacteric ones generate a negligible amount of this fruit-ripening enzyme once they have been picked.

Knowing the distinction between these 2 types can help both farmers and consumers. For climacteric produce, farmers can harvest them early on to prevent them from becoming overripe before being eaten. Consumers can also purchase hard, underripe pieces of climacteric fruits for the same reason.

But this is not the case for non-climacteric ones. Such fruits and veggies should be plucked or bought right after they reach the stage of ripeness.

What Does Ethylene Do To Fruit?

This compound plays an integral role in not only fruits’ ripening rate but also their continual survival.

To begin with, unripe fruits are overly firm and sour. For this reason, they are too unappealing for humans and animals to consume.

But as fruit-bearing plants approach their maturity, they emit a burst of ethylene. This crucial enzyme breaks down fruits’ starch and converts them into 3 forms of simple sugar, namely fructose, glucose, and sucrose.

Thanks to this naturally present enzyme, fruits’ acidity diminishes, their firmness decreases, and their sweetness intensifies considerably. As fruits are such prime condition, they become attractive to consumers.

From a biological perspective, ethylene is one of the determining factors in a species’ growth. Fruits with sufficient amounts of ethylene are appetizing, which attract animals. After animals eat these fruits, they disperse the seeds. As the seeds are spread far and wide, that species start to develop in distant regions.

Unfortunately, too much of a good thing can be a bad thing. Indeed, excessive ethylene can worsen fruits’ texture, making them less crispy and more tender.

What’s more, as fruits have gone past their prime, they become inedible and begin to spoil. Thus, every year, ethylene causes tonnes of fruits to decompose during the transit and storage phases. This, in the long run, exacerbates food waste, making it an urgent global issue.

Exposure to a tiny amount of this enzyme can prompt them to constantly generate substantial quantities of ethylene until their concentration reaches a peak. This, in turn, promotes their ripening process.

A rule of thumb is that these ethylene-sensitive fruits should not be placed near ethylene-producing ones because this plant hormone can be transmitted through the air. Such external sources of ethylene can hasten the ripening rate, or worse than that, speed up premature decay.

Another tried-and-true rule is that they should not be stored in resealable bags or airtight containers. Doing so can trap this ripening gas and accelerate your produce’s decomposition. If your fruits and leafy greens rot, they can lose their light crispiness, delightful flavor, desirable fragrance, and nutritional value.

Which Fruits Produce The Most Ethylene?

How To Control Ethylene Production In Fruits And Vegetables

While it is almost impossible to cause ethylene generation to come to a halt, you can keep the amount of this ripening enzyme under control by refrigerating your veggies. This is because the low temperature in your fridge inhibits the production of ethylene to a certain extent.

Significant benefits can be derived from the refrigeration process. More specifically, it impedes the wilting of leafy greens, hinders the loss of firmness in fruits, and significantly extends their shelf life long after they are harvested.

The advantages mentioned above are amplified for restaurant and grocery stores owners. By investing in cold storage, they can preserve the freshness of their produce, thus boosting sales and combating the problem of food waste.

However, storing fruits and vegetables at low temperatures has some disadvantages. The most notable downside is that this method fails to keep veggies’ crunchy texture and tasty flavor intact (although their nutritional profile is still preserved). Fruits and leafy greens tend to become mushy if refrigerated for extended periods.

How To Test For Ethylene Gas In Fruits

There are many methods to determine the level of this naturally occurring gas in fruits, with the most science-backed ones deploying electrochemical sensors or laser-based detectors. Such proven approaches offer a great degree of scientific granularity.

However, because such cutting-edge equipment is only available in the most advanced laboratories, we’ll solely focus on a DIY method you can conduct at home. This technique calls for a knife, a tray, and a bottle of iodine solution that can be easily found in pharmacies or grocery stores.

All you need to do is follow this straightforward procedure:

A chemical process can explain this. You’ve probably known that fruits with a minute amount of ethylene are low in sugar but high in starch. The iodine solution immediately binds to starch, initiates a physiological reaction, and results in a dark-colored compound.

This is in direct contrast with fruits that contain a large amount of ethylene. This is because ethylene converts starch into sugar. And iodine doesn’t bind to sugar, so those fruits remain unstained.