Enchilada versus quesadilla has always been a heated battle between Mexican food lovers as the showdown of these two delicacies is always inconclusive.

Some people prefer enchiladas due to their spicy, meaty flavor, while others enjoy hot fresh quesadillas owing to the melting cheese.

It’s also the reason why it’s so hard to find a winner in this battle. If you also don’t know which team to join or don’t see the difference between these two famous Mexican foods, today’s post is for you.

Overview Of Enchilada And Quesadilla

So, do you know what enchiladas and quesadillas are? If not, here is a basic description of those two.

Enchiladas are an unbelievably excellent strategy for leftovers by Mexicans in the first place. The first recorded enchiladas form was probably a corn tortilla wrapped with leftovers and served with chili sauce. Yet, enchiladas have gained a reputation and now are one of the best street foods over the years. Moreover, we also have another type of quesadilla, a half quesadilla. It is a corn tortilla loaded with cheese, wrapped in the form of a crescent.

Enchiladas Vs Quesadillas: A Complete Comparison

Now, let’s come down to the comparison between enchiladas and quesadillas to figure out their similarities and differences better. First, we’ll compare their origins, tortillas, fillings, sauce, and cooking techniques.

Historically, enchiladas, as many would assume, arrived from Mexico. Earlier in the Mayan age, locals stuffed the tortillas with different components. For thousands of years, it has been the norm in the community.

Corn tortillas having a seafood stuffing were the first enchiladas when the Spanish invaders came to Mexico. Back then, anything that the Mexicans ate got scrupulously documented.

They wrote a lot about enchiladas and also mentioned detailedly the way the inhabitants cooked this dish. One of the oldest recipe books also featured enchiladas in the 1800s.

On the other hand, the quesadilla’s history dates back to the arrival of Spanish colonists in Mexico in the 1600s. In Medieval Spain, turnovers (stuffed pies) were quite widespread.

Ingredients like cheese, poultry, or turkeys, along with delicacies like tortilla (Tlaxcala in Nahuatl), is what people today call quesadilla. Also, the very first source mentioning the term goes back to 1324 in El Llibre de Sent Soví, a Catalan periodical.

Both dishes utilize corn tortillas as their outer wraps, and there’s a significant reason for it.

The name “tortilla” comes from the Spanish term “cake,” which people mentioned in the mid-1600s for the first time. The ingredient itself, a thin flatbread formed from dried, thin ground maize, has appeared in the Sierra Madre Mountains in Mexico for centuries.

Many people believe the tortillas appeared initially about 10,000 B.C.E., which correlates with the earliest domestication of maize in the region. In the history of numerous Mesoamerican cultures, such as the Aztecs and Mayans, maize has been a crucial ingredient. It has served as locals’ primary energy supply.

Indeed, corn isn’t only a plant for Mexicans and Central American natives. It represents their identity, and it’s their symbol. Thus, corn tortillas are one of their most treasured ingredients and the basis of most classic Mexican recipes.

Corn tortillas originate from masa tortillas, a paste prepared from dried maize grains, steeped and softened in a mixture known as ‘nixtamalization.’ Then they pounded it thoroughly into a moist, foldable dough. People can also prepare masa by utilizing masa harina or with dry maize flour. 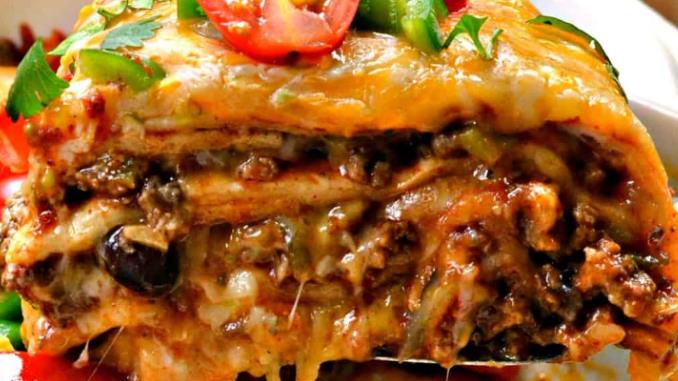 Enchilada’s fillings are absolutely up to your preferences. They might either be newly prepared protein or leftovers. If you are a vegetarian, you may also skip the meat and choose veggie options for your tortilla.

If you belong to the meat team, trying the most common meat components like chicken and beef is advisable. Besides, any ingredients could theoretically be in your enchilada in these modern days.

On the other hand, most people describe a traditional quesadilla as two tortillas with melted cheese and a personal filling choice layered in between the wrap.

Yet, the choices for the filling are practically boundless these days, ranging from fully vegan options to substantial, fusion-inspired variations. Load it with everything from poultry to livestock, serve it with or without peas, and forget the cheese.

Roasted red or green chili peppers, tomatoes, garlic, onion, and sour cream are common ingredients in these dressings. As a consequence, the food is usually rather intense.

On the flip side, quesadillas typically go with a combo of green or red salsa sauce, pico de gallo (salsa Bandera), minced onion, and guacamole. Again, however, the sauce options are various.

How to get these recipes to perfection

If you want to go for the classic Mexican enchiladas, the chili sauce would be the first thing you want to make. Afterward, people will utilize this dip to add the unique taste of the enchiladas.

Then, it’s time to prepare the stuffing to put inside the corn tortillas. When you finish the stuffing process, make a wrap and dip it in the sauce we made previously. If you want to add a modern vibe to the dish, consider adding cheese into the stuffing. However, it serves as a topping in most cases.

After that, they will place the enchiladas in the oven and bake them until everything is hot. They can also put the shredded cheese on top to have a melted cheese topping in the last few minutes.

On the other hand, making quesadillas is a bit more straightforward. First and foremost, you’ll have to prepare the fillings. As mentioned above, there are thousands of options out there for you to try.

People also add a few fresh epazote leaves (one of the Mexican herbs) and skinned chili poblano as the rudimentary recipe in some areas.

Then, locals will grill it in comal or on the two sides until the cheese melts and the tortilla becomes crispy. As they usually prepare quesadillas using a little butter instead of lots of oil or lard, the dish gets even more crunchy.

After that, it’s advisable and authentic to top the dish with lots of cheese and fillings. When the cheese melts, gently fold the tortillas. Finally, serve them hot with your favorite sauce. Adding melted cheese as a topping is also the preferred choice of many people.

Are these two dishes more popular than Burrito?

All of them are very popular in the United States and Mexico, so no need to compare them.

Now you know the similarities and differences between these two: quesadilla vs. enchilada. However, if you’re wondering which one is the best, we say it’s up to your preferences.

If you prefer a spicy dish with flavorful fillings, it’s advisable to go for enchiladas. Yet, if cheese and a light, crunchy snack are what you are looking for, quesadillas are the best choice. Feel free to go for any fillings options you prefer: we guarantee whatever you choose, it wouldn’t fail you.