When it comes to breakfast, traditional bacon and egg pale in comparison to Mexican cuisines like Migas and Chilaquiles.

Their flavors are so special that they bring a brand new experience to whoever first tries Mexican foods.

Despite sharing some similarities, these two dishes are both distinct in their own ways. And if you think that Migas and Chilaquiles are the same, this guide will help you point out the differences between them. Chilaquiles (pronounced “chee-lah-KEE-lays”) is a traditional Mexican dish. Chilaquiles are created with fried tortilla strips that have been softened by cooking them in red or green salsa or mole. This meal is excellent for repurposing leftovers since it can be made using stale (or store-bought) tortillas. Refried beans are usually offered on the side.

For those who overindulged the night before, this substantial breakfast or brunch meal has been termed a “hangover cure.” Tornaboda, a late-night brunch following a long wedding celebration, usually serves it.

Some of the most frequent ingredients in Chilaquiles include fried or scrambled eggs, cheese, chiles, sour cream, raw onions, cilantro, or chorizo. Furthermore, meats such as shredded beef or chicken are available, with chicken being the most popular.

Chilaquiles is considered a favorite dish in many Mexican families and restaurants, motels, and street vendors. As a result, there are regional variations in Mexico.

In Mexico City, tortillas are usually cooked in a sour green tomatillo sauce or a spicy tomato sauce. Crisp tortilla chips are favored in Central Mexico; therefore, instead of boiling them in salsa, the salsa is poured straight onto the chips shortly before serving.

In Guadalajara, Chilaquiles are typically simmered in cazuelas, a distinctive cooking pot, until they thicken into a polenta-like consistency. In Sinaloa, white sauce, not red or green, can be used to prepare Chilaquiles. 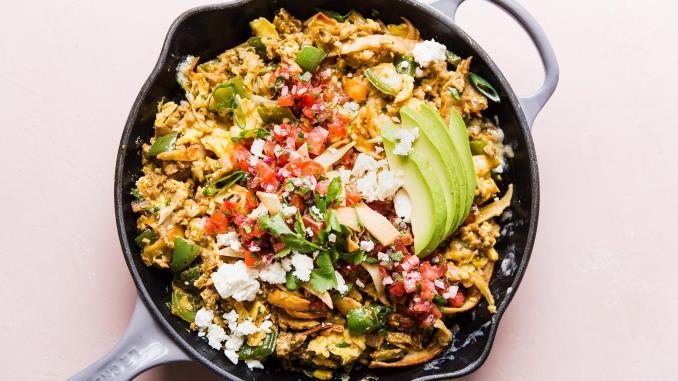 In Mexican, Tex-Mex, Spanish, and Portuguese cuisines, Migas is a popular meal initially designed to feed a large group while still providing a pleasant and enjoyable experience.

Originally, Spaniards cooked the meal using leftover bread, but most today use tortillas or tortilla strips instead of bread. While this may not appear to be a significant difference, bread and tortillas are highly different and can alter a dish’s whole character.

While there are true Migas from Spain and Portugal, Mexican and Tex-Mex variants vary depending on the recipe. The classic meal is made out of fried tortilla strips and scrambled eggs as the foundation.

Other ingredients are then added to bulk it out and offer fresh tastes. The Tex-Mex version has even more components, which are mainly used for flavor and condiment reasons.

When the phrase “Migas” is used, most people think of Mexican Migas. However, remember that it’s virtually the same as real Migas, only that instead of tortilla strips, bread is used as the basis.

We’ll be comparing Mexican and Tex-Mex Migas for the most part, as these are the most prevalent ways to make Migas these days.

Migas are often made with a base of roughly broken tortilla bread or corn chips, scrambled with an egg, chili, and tomato, and topped with salsa, refried beans, and cheese (or a similar variation of this).

On the other hand, Chilaquiles typically have their corn chips soaked and fried in salsa (for that crunch). The tortillas are quartered and frequently cooked or even baked before being used as the entire basis of the meal. This meal is commonly finished by adding salsa or a red or green sauce and then simmering it.

The texture of Migas will be softer than that of Chilaquiles. The tortilla strips may be served on the side rather than scrambled into the meal in some circumstances, making a huge difference. Also, rather than mixing them in with the eggs, they call for fried corn chips.

However, if the same foundation components are utilized, the flavor will be comparable (chili, tortillas, corn chips, and eggs). Depending on the items you choose, the recipe will be different.

When it comes to knowing how the two recipes are made, the critical components are chiles, eggs, and corn tortillas. They are, however, manufactured differently.

Chilaquiles is a classic Mexican meal with a limited number of variants. It’s all about combining tastes in this meal as well. It’s more of a whole meal than a scramble.

Migas is a scrambled meal made by tossing everything together. It was initially a Spanish or Portuguese meal using tortilla strips converted to Mexican and Tex-Mex cuisine.

Can you replace the tortillas with other food ingredients when making these Mexican dishes?

In my opinion, you shouldn’t do so.

There is a reason why traditional Mexican foods all use tortillas instead of other wrapping ingredients.

In conclusion, while Migas and Chilaquiles include comparable and consistent components, they are two completely different meals.

However, regardless of the distinctions and similarities between Chilaquiles vs Migas, I believe we can all agree that they are an excellent breakfast mix-and-match that is great for sharing with friends and family wherever you are!