Chicken enchilada is one of the most appealing specialties in Mexican cuisine that many people worldwide all love due to its irresistible taste.

This homemade classic is a perfect dish that has been a family favorite for generations.

Primarily, you can prepare this at home with an easy and mouth-watering recipe.

But can chicken enchiladas be made with flour tortillas?

If you’re still asking that question, then keep reading to find out more.

Can Chicken Enchiladas Be Made With Flour Tortillas?

Yes, they can! Even though corn tortillas are considered traditional ingredients to make chicken enchiladas, flour tortillas can also do a great job and live up to your expectations. You can clearly replace corn tortillas with flour ones, even by using made-from-scratch ones at home.

Why Use Flour Tortillas? 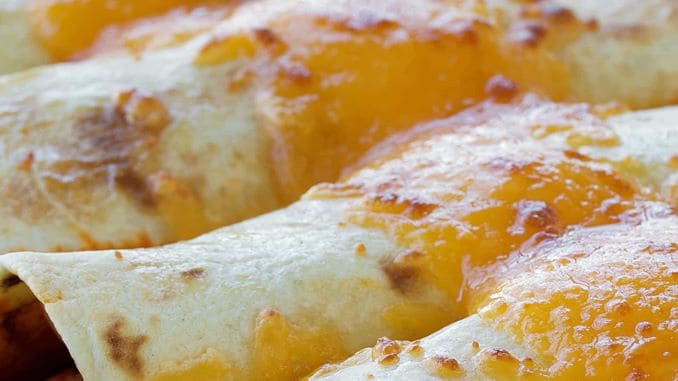 Aforementioned, many homemakers like to use them, partly because they can remain together better than corn tortillas, which tend to come apart.

Therefore, if you want your enchiladas’ filling to stand out, you should choose them. They are also extensively available in northern Mexico and Mexican American restaurants.

Specifically, they require a dose of lard or vegetable shortening to bind the dough together, lest you end up with a creepy cracker. This also creates the most significant difference from corn ones, besides the base ingredients.

In addition, they are softer than corn ones; however, they don’t have the same flavor.

On the other hand, they can stretch and bend more than corn tortillas, allowing homemakers to prepare enchiladas in much larger sizes (they won’t break like a corn tortilla at the same size).

What Is It Used For When Preparing Chicken Enchiladas?

As you know, chicken enchiladas are a combination of flavourful shredded chicken and cheese, topped with the best enchiladas sauce and stuffed into flour ones.

Of course, you can freely add more cheese if you prefer. Then, they’re baked until the cheese is deliciously melted and becomes bubbly.

Therefore, when preparing this dish, tortillas made of flour are used to wrap up all the enchiladas filling.

Moreover, they are softer and lighter in texture than corn ones, making them easier to roll up once filled.

The chicken enchiladas recipe is incredibly flexible, and you can freely customize it however you would like. Therefore, you can also choose the different tortillas as your taste and preferences.

In fact, there are many different varieties that you can buy in stores or create at home with masa dough and a cast iron tortilla press. Mexican cuisine is complex, and the tortillas reflect that diversity!

To make things simpler, flour and corn tortillas are the two main types; you can also use them interchangeably as your own desire.

As a result, corn ones can perfectly be a substitute here.

In addition, people frequently regard corn tortillas as more traditional and healthier. In contrast, their taste is often favored in the United States since it is, of course, closer to flour bread.

How Not to Make Everything Soggy?

While making some Mexican food such as tacos and quesadillas is enjoyable, preparing chicken enchiladas at home is much more complex. In fact, understanding the Mexican way of how to make enchiladas can help you nail it.

Before using it to produce authentic enchiladas, people usually lightly cook the tortillas. This straightforward procedure crisps the tortillas and forms a barrier to prevent them from absorbing too much enchilada sauce.

Apart from preventing soggy enchiladas, cooking the tortillas improves the dish in other ways as well. Slightly crisping tortillas, for example, enhances flavor because the proteins brown and the sugar in the tortillas caramelizes.

In addition, cooking these in oil for a brief time adds richness to the dish without leaving too much oil on the tortillas.

Whatever method you use to crisp your tortillas, you’ll know they are done when they bubble and become a bit brown, but they’ll still be soft to the touch.

You need to have all of your other ingredients on hand so that you can dip them in sauce, stuff them, roll them up, and bake the enchiladas as soon as they’re fully cooked.

How Do You Roll Chicken Enchiladas With Flour Tortillas?

When making chicken enchiladas, people frequently use flour tortillas to wrap around the filling of shredded chicken and cheese or whatever tickles you fancy.

To know more about the process, check out the below video as your reference:

Here are the other things you need to prepare:

You had better prepare enough enchiladas to feed everyone based on the number of people you’ll be serving. Plan for each person to have at least two chicken enchiladas.

Slow-cooked and braised chicken will work well when paired with cheese filling. A slow cooker will help you to save on time without having to sacrifice tenderness or flavor. To save more time and effort, I recommend buying a cooked rotisserie chicken from the grocery store and shredding it at home.

This is such an important step that makes tortillas more pliable before rolling. When it comes to heating, you have these options, and you can determine the method used by time and ease. After that, you should flip them halfway through until they’re warm and pliable.

Place the filling on the center and wrap

First, combine cooked shredded chicken with 1/4 cup enchilada sauce in a large bowl, then season with salt and pepper to taste.

Next, till each tortilla evenly with the shredded chicken mixture and a good pinch of shredded cheese before assembling the enchiladas. Then, roll them up tightly and lay them seam-side down in a large baking dish.

Pour the remaining enchiladas sauce over them

The rest of the sauce should be used to cover the enchiladas to keep them moist. If you’re using shredded cheese to top your enchiladas, do so first, then pour on the sauce.

The sauce will keep the cheese from burning until the enchiladas are thoroughly heated. Cover your casserole dish with foil and bake for 25 minutes at 350°F (177°C). Then, you can bake for 20 minutes until the cheese is melted and bubbly. Serve!

Thanks to the wide availability of high-quality flour tortillas and other essential ingredients, making homemade chicken enchiladas is so easy. Try our recipes and tips, and then you will have excellent dishes in your dinner rotation!