If you’re wondering what to cook for dinner tonight, give the chicken fajitas a shot.

It’s a beautiful dish embellished with various colors, a harmonious balance between meat and vegetables that brings an excellent taste.

As a food lover, you will feel a desire to learn more about the origin of the dishes. Of all the questions, “Are chicken fajitas Mexican?” is among the most favored ones.

At nearly any Mexican or Tex-Mex restaurant, customers can see the word “fajita” on the menu. Thus, the very name of the dish already makes us think of Mexico. Is that true? This article will provide you with valuable insights into this matter.

Unfortunately, no. Chicken fajitas don’t genuinely come from Mexico as you might think. In fact, most people misunderstand the term due to the “fajitas” part of its name.

Fajita is considered an Americanized Mexican dish consisting of grilled meat, peppers, and onions, usually served on a flour or corn tortilla.

It is believed to be invented by Mexicans, but not within the borders of Mexico because ingredients like ground beef, yellow cheese, wheat flour, and canned vegetables are hard to find.

Where Did They Originate? 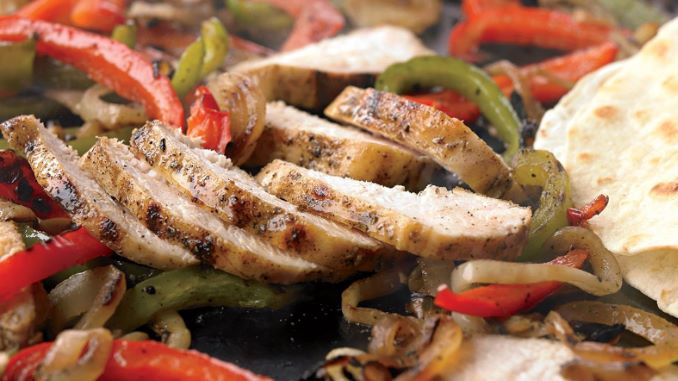 It is difficult to ignore dishes with unique names that will make you curious about why people decided to label them, like Ceasar Salad or Beef Wellington. Hence, learning the origin of a dish will make you love and appreciate it more.

The same goes for chicken fajitas. Before it was as famous as it is now, it also has a long history from the 1930s to the present.

Although the chicken was not the main ingredient of this dish back then (people mainly used beef skirts), it is still quite interesting to know the origin of fajitas.

Unlike what you might think, they came from the ranchlands of South and West Texas – where the number of Mexican workers is quite large.

The first person to research the origin of these fajitas was Homero Recio. His research was conducted in 1984 and was part of his graduate thesis on animal science at Texas A&M.

The reason Recio chose to research this dish was that the retail price of beef had skyrocketed. He wanted to find out why the beef skirt, which is said to be “not very tasty,” has become the culinary star of Tex-Mex menus. 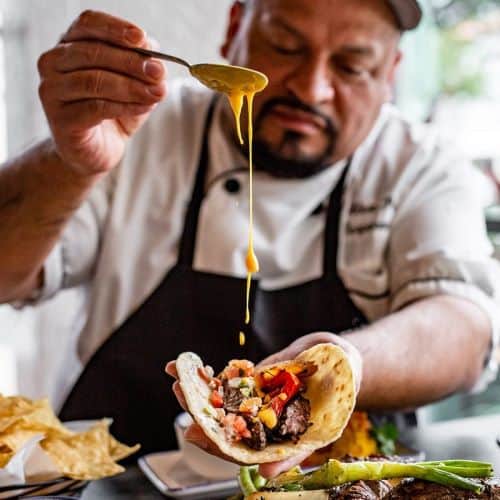 Back then, when beef was cut for food, some of the bad parts of the cow (like the hide, the head, the entrails, and meat trimmings) were set aside and given to Mexican workers as wages for them.

When owning such a least desirable part of beef, Mexican workers had to think of reasonable processing ways to create suitable dishes for their taste. They marinate this meat with various spices, grill it, and then eat it with the tortilla.

For decades, this dish has been popular at backyard meals and during very casual campfires. However, it was unlikely that it would become the famous and popular dish like it is today.

Further reading: 6 “Mexican” Dishes No One Eats in Mexico

What Does Fajita Mean In English?

This dish is so famous and exciting that its name “fajita” has many meanings, and one can even start a long story with it. The word fajita comes from the Spanish word “faja,” meaning “strip” or “belt.”

Initially, when referring to the word “fajita,” people mean skirt steak, the type of beef that has been used for this dish since the earliest days. Therefore, fajita is simply understood as small strips of meat cut from the beef skirt.

Although still keeping the name fajita, people have now developed this dish with some other popular types of meat, especially chicken with similar seasoning.

Besides, unlike the original fajita, the fajita is now cooked with many fillings such as red peppers, green peppers, yellow peppers, or onions. If you want to learn more about fajita, check out this article.

What Is Traditionally Served With Chicken Fajitas?

When chicken fajitas were discovered, they quickly became the main dish at the dinner table. Right from the time it is cooked, this dish has attracted hungry stomachs by the beautiful scent of spices, in addition to the pleasant sizzling sound and eye-catching colors.

So what dishes can be served with them, which match the taste of this dish and enhance its flavor? Here we will introduce six side dishes that are most suitable for your meals.

This is an excellent dish for an explosion of flavor as it has the same spices. After the rice is cooked into white rice, it is mixed with red tomatoes, bell peppers, onions, chili powder, and green chiles.

You don’t want to eat rice but still want to add a little starch to your dish to have all the groups of nutrients? Don’t miss out on Mexican quinoa.

Almost no list of Mexican dishes can be complete without this dish. Mexican Guacamole is a signature dish in Mexico, quite famous and suitable to eat with other Mexican dishes.

Plus, it’s super simple to make with some simple and healthy ingredients. The star of this dish is avocado. A little salt and lime can be added to balance the taste. You can also add some chilies, cilantro, or pepper if you like.

Tortillas are often served with fajitas, and chicken fajitas are no exception. You can use tortillas made from corn or from flour, and before eating, heat the tortillas a little in the oven for a better taste.

When choosing a side dish, which makes us fuller and enhances the flavor of the main dishes, dishes with potatoes are always the first choice. Roasted potatoes can be a great companion here.

We cannot mention guacamole without mentioning salsa. Two dishes are two companions in almost every Mexican party. The ingredients to make this dish are as healthy as guacamole; you almost can’t fail to make it.

Salsa includes tomatoes, onions, and cilantro – essential ingredients that can be found anywhere.

Can You Eat These For Breakfast?

Of course, there is no problem doing that. If you are a food lover and don’t want to waste leftover chicken from last night’s dinner, chicken fajitas will be a great choice.

Especially if there are many people who need to eat breakfast, chicken fajitas are at the top of the dishes that can be made quickly and still full of nutrition for a long day.

In fact, it all depends on how much and how you eat.

To answer this question, it is necessary to examine some ingredients of chicken fajitas, then determine this dish is healthy or not.

Usually, to make chicken fajitas, people use chicken breast meat. This type of meat contains beneficial nutrients, which are low in fat and often used to lose weight.

In addition to chicken breast meat, other main ingredients include vegetables. Usually, this dish is served with tortillas to have more starch. Overall, this is a nutritious dish.

For oil, it entirely depends on the cook. Of course, olive oil is a great option.

However, if you go to a restaurant, you may not be able to choose your desired type of oil, like cooking at home where you have complete control over it. After all, always prioritize plant-based oils for health purposes.

If you want to reduce your calorie intake, you can skip guacamole and sour cream. So, in general, if you eat at a restaurant, this dish will not be as healthy as you want (although it’s okay to eat a small amount). However, if at home, whether chicken fajitas healthy or not is entirely your choice.

After reading this article, you should have successfully grasped all the necessary information for the question “Are chicken fajitas authentic Mexican?”

Each dish has its own origin, and hopefully, you will never stop searching for and learning interesting stories about other famous dishes to spice up your meal as well as your knowledge base.