It must be no stranger to enchiladas for food lovers, a traditional Mexican dish but mistakenly known as a typical symbol of Tex-Mex cuisine.

People found many enchiladas classified by rolled ingredients like chicken, beef, and fish served in many restaurants worldwide.

However, the most popular one may be chicken enchiladas.

It is easy to find them in Mexican and American specialized restaurants, making many people confused about chicken enchilada’s correct origin or wonder whether chicken enchilada is an authentic Mexican dish.

This article will help you find the correct answer to the question “Are chicken enchiladas authentic Mexican food?”.

Fact is, chicken enchiladas are truly authentic Mexican food. Many shreds of evidence found in historical records reveal that the first simple type of dish appeared from the Mayan civilization and have unstoppably developed until today. 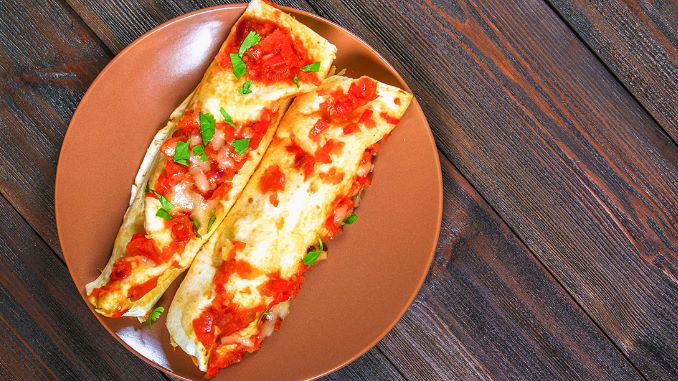 Back to the time when the land in Middle America belonged to the Mayans, corn was a staple crop, and tortillas were a famous cake at that time.

They were initially called Tlaxcalli.

The Mayans rolled different ingredients like corn, vegetable, and even fish into tortillas then dipped with poblano pepper sauce to eat as the main dish in their daily meal.

In this way, enchiladas became the oldest traditional Mexican dish for many centuries.

From 1345 to 1521 was the time of the Aztec Empire. After the Aztecs invaded a vast land from the hands of the Mayans, the Aztecs built an empire now called central Mexico just in a century.

However, the Aztecs did not abolish Mayan cuisine. Instead, they received, developed, and created a rich culinary culture for themselves.

Thus, the Aztec empire period could be said to lay the foundation for modern Mexican cuisine.

Some typical Mexican food that appeared at the Aztec Empire time which you can find until nowadays, include salsa, tomatillos, tamales, and enchiladas.

When the Spanish conquistadors invaded Mexico in the 1500s, they kept almost whole detailed records of the culinary culture of the locals, especially Enchiladas. It seemed the Spanish also did like the dish since they talked a lot about this dish in their history books, where they described detailedly how it’s tasted and how popular it was.

With receptivity, the Spanish had also contributed to the preservation and development of the dish by adjusting and adding a few ingredients to make new versions and better suit their taste.

For instance, they introduced pork into Mexico and created a new type of enchilada named pork enchilada with a yummy taste. Moreover, they also brought this recipe as an indispensable dish in their daily meals on coming back to Spain.

Why Do People Usually Think Enchiladas Are The Symbol Of Tex-Mex Food?

Tex-Mex food is a fusion of Mexican food and Texas food.

The reason for this fusion came from the geographical distance between Mexico and Texas.

It is pretty understandable as the border is always a vital intersection of culture and cuisine among countries.

When Texas declared its independence in 1836, it officially became a part of the United States in 1846.

With that, people here came access to all the different foods available to the North of the United States, such as beef, black beans, canned vegetables, wheat flour, or yellow cheese that are not popular in the area next to the Mexican border before.

They combined the new ingredients with Mexican dishes to make a unique and unusual cuisine called Tex-Mex food.

A few famous Tex-Mex recipes that you quickly find in many American restaurants include fajitas, nachos.

What Ingredients Are Used? 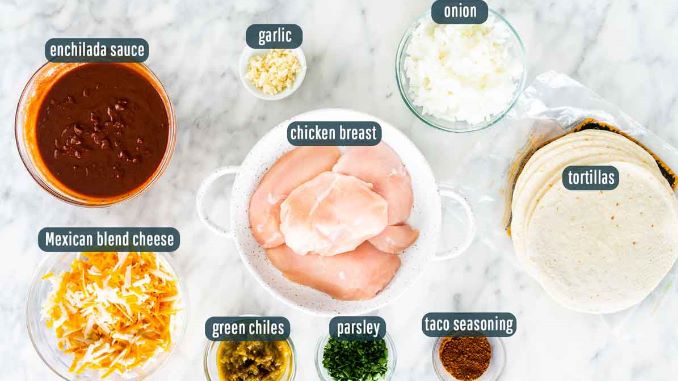 One of the best-liked types is chicken enchiladas.

Two main parts of chicken enchiladas include rolled tortillas and poblano pepper sauce. To make the perfect dish, you must complete both perfectly at the ideal level.

In particular, this type of food has a shelled dish made from cornmeal rolled with chicken or beef filling. Sometimes, you can find enchiladas with fish or cheese filling, but chicken and beef are more popular than ever.

The Mexicans always serve with onions, chopped coriander, sour cream, cheese, and a spicy sauce made from poblano peppers.

As a result, Enchiladas has a rich, tangy taste, promising to be an irresistible dish.

To prepare for the first time making this, I will list some critical notes for the four main ingredients in this recipe. Of course, you can adjust or add favorite substitutes.

First of all, you must have corn tortillas. Therefore, it would be best to choose tortillas made from corn instead of wheat because corn tortillas will bring back the authentic taste of the dish.

Second, you should choose chicken breast instead of meat in other parts as your chicken will be soft enough to tear into small pieces.

Third, the next ingredient is chili sauce. There are many types of chili sauce you can find them easily in markets. Yet, it would be better to make the authentic flavor if you chose sauce made from poblano pepper.

Finally, the last note is for cheese. For your reference, some types of cheeses include Monterey Jack, Cheddar, Asadero, and Queso Quesadilla cheeses. It would help if you used Mexican cheese for this recipe.

Enchiladas is not a complicated recipe; therefore, you are entirely able to do it by yourself at home.

You can refer to this video:

Why Are Enchiladas Important To Mexican Culture?

Like Kimchi in Korea, Sushi in Japan, Enchiladas play an essential part in Mexican cuisine and Mexican culture.

Enchiladas have become a symbol of a traditional Mexican meal with the perfect combination of tortilla, meat, cheese, and sauce.

Mexico’s culture is diverse, colorful, and vibrant, influenced profoundly by its ancient civilizations, such as the Aztec and Maya and European colonization.

As a result, it is unique and probably one of the fascinating cultures in the world.

Among those cultural blends in many respects, enchilada is one of the few oldest traditional Mexican recipes almost perfectly preserved to this day.

It is an authentic Mexican dish because its ingredients are all essential ingredients typical of Mexico, like corn, poblano pepper, fish, and chicken.

None of them were introduced from other foreign countries, which make Mexican people’s pride in Enchiladas.

For Mexican people, Enchiladas are not only a traditional dish but also history witnesses.

This dish accompanied the Mexicans in many ups and downs in their history since Mexico was only the pristine land owning to the Mayans until the Mexicans gained independence.

Despite the change in the recipe of the dish, the core ingredients and the taste of this dish are still intact.

Is Chicken A Popular Choice In Authentic Mexican Foods?

To answer this question, we have to come back to the past one more time when the Mayans were the only landowner.

At the time, Mexico had abundant forests, jungles, lakes, rivers, and two sides facing the oceans (Pacific and Caribbean Bay).

Therefore, it was rich in flora and fauna (wild animals) – which were hunted, cooked, and eaten by the ancient indigenous.

The most hunted animals eaten by ancient people are squirrels, quails, geese, rabbits, coyotes, crocodiles, chickens, doves, fishes, and lobsters. That was how they formed part of the authentic Mexican cuisine.

The pork was only introduced to Mexico in the sixteenth century when the Spanish colony invaded this land.

However, the first oldest records of the dish do not mention that people used chicken for this dish. Instead, they only used other essential ingredients of Mexico in the recipe, including tortillas, corn, poblano peppers (used to make chili sauce), beans, onion, and sometimes fish.

Later, under the Aztec Empire, the most prosperous Mexico period before becoming a Spanish colony, more ingredients were added, such as chicken, beef, chopped coriander, and cheese.

That the Aztecs added more components to the recipe created a perfect taste for Enchiladas.

The special favor attracted the Spanish the first time they tried them and quickly became staple foods of the Spanish army during the occupation in Mexico.

Even when the Spanish withdrew troops, they also brought this recipe back to Spain. Nowadays, this dish is still well-liked by almost all Spanish people.

Is It Better To Make Them Flat Or Rolled?

People roll tortillas to help the filling not come apart when dipping the sauce and is easy to hold on eating.

Nevertheless, enchiladas rolled is just the traditional way to make it, and nothing is better between flat enchiladas and rolled ones.

You can choose which you would like as this will not affect the flavor of this dish.

I hope the historical information and useful facts in choosing ingredients for this recipe will help you make your own chicken enchiladas successfully at home.

If you think this article is informative, do not hesitate to share it with your relatives and friends. Or, if you have additional information, please share them in the comments.

link to What To Do With Leftover Brownies? (Quick Ideas)

What do you do with leftover brownies? If you're like me, you might eat them for breakfast. But if you're looking for some other fun ideas, check out these suggestions. From turning them...

Continue Reading
link to What To Do With Leftover Brown Rice? (Quick Ideas)