There are mainly 2 reasons why you might feel bitterness in your stuffed peppers:

Either they are still green (not fully ripe).

Or maybe you missed out on one of the most important culinary tricks – discarding all the seeds.

Green bell peppers are actually unripe, which can explain their bitterness.

For that reason, your stuffed peppers usually come out more bitter when using this bell pepper variant. You might also notice there’s a grassy flavor accompanying that bitter tone.

Bell pepper seeds and cores are also the ones to blame for the unpleasant bitter taste.

That’s why if they are left inside the bells, your stuffed peppers will end up bitter even when you use fully mature red peppers.

How Do You Fix This?

The best way to avoid unpalatable, bitter stuffed peppers is to choose red peppers. They are fully ripe and sweeter than their green, yellow, and orange siblings.

If you want to add more playful colors to your dinner table, yellow or orange is a nice addition. Keep in mind that the bitterness gradually loses as the vegetable ripens. In other words, orange peppers will be less bitter than yellow varieties.

Removing All The Seeds 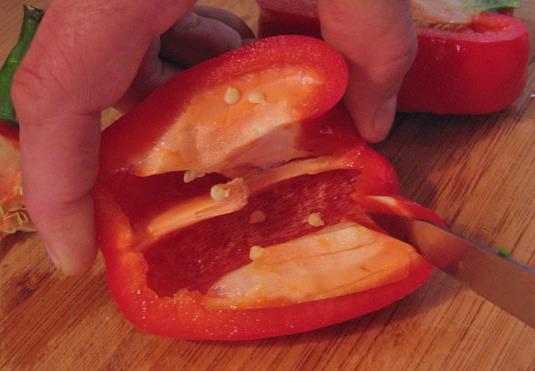 Cut the pepper tops in a circular motion, then get rid of the cores inside the bells. Strip away all the seed from the top. You may want to poke some small holes at the bottom to eliminate all the remaining seeds that you cannot remove from pepper tops.

The task takes only 3-5 minutes, but it’s critically important to the final taste.

Adding Some Cheese On Top

Raclette, Parmesan cheese, Mild Cheddar, or Mozzarella cheese excel at masking the bitter tone and elevating the flavor of your dish. The best idea is to add some layers on top of each bell midway through cooking.

Alternatively, you can use any of these cheeses to make lip-smacking heavy cream or cream sauce.

It’s worth mentioning you should not include cheese in the stuffing. It won’t work well with white rice, lean ground beef, ground pork, ground chicken, or other kinds of ground meat. The cheese will melt under high heat and form untasty lumps with meat in the end.

Adding Flavors To The Stuffing

Adding some flavorful ingredients to the stuffing can be an awesome way to balance the bitterness of bell peppers. Sweet paprika is a favorite spice for stuffed peppers, offering sweet notes and a pop of color for the meat. Using paprika also does not add much to your calorie diet.

Some coconut milk or a tablespoon of butter can also balance against the bitter taste to create irresistible savory dishes. They can be a game-changer to bringing out a delicious beef rice filling.

Should Peppers Be Cooked Before Stuffing? 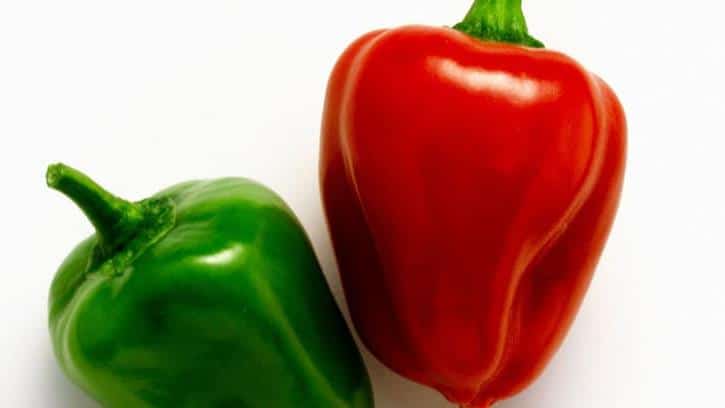 We recommend pre-boiling bell peppers before stuffing them.

If you don’t, there’s a high chance that they will be harder than you expected. Cooking peppers before stuffing will give you the right texture, and later, they will cook perfectly alongside the meat.

Note: Pay attention to the bells’ texture while they are in boiling water. You don’t want them too soft to not stand firmly on their own.

If you’re pressed for time or simply don’t want the hassle of pre-processing peppers, it isn’t a deal-breaker to start with raw bells right off the bat. All you need is to cook the whole thing for another 10 – 15 minutes until the exterior reaches the desired softness.

Are Bell Peppers Sweet Or Bitter?

As mentioned, bell peppers are bitter when they’re unripe, and the bitterness will remarkably decrease while they become mature. When they are on their plants, their colors will develop from green to yellow, then orange, and finally, red once they reach maturity.

Green peppers are the least ripe and have the heaviest bitter profile, so they are often referred to as bitter peppers. Orange and yellow peppers carry a much less bitter note and are sweeter, whereas fully ripened red bells are the sweetest.

Is It Better To Eat Bell Peppers Raw Or Cooked?

Since Vitamin C breaks down with heat, it is advisable to cook these vegetables until tender-crisp. Keeping them on the heat any longer will risk losing this nutrient.

Stir-fried and roasted peppers are two recommended methods that help retain the vitamin content and increase nutrient absorption in your body. Keep in mind to avoid using too much heat, or all the nutrients will vanish into thin air.

Red bell peppers are a powerhouse of Vitamin C. This nutrient content is higher than any other pepper variant and almost triple that of an orange. Slightly sauteed red bells with oil are a great way to get the best out of this vegetable.

You can also eat them raw to fully benefit from their nutrition. Slices of vibrant red peppers will provide your salads with a touch of color, crunchiness, and sweet flavor.

We also love to have different hues for the salads by throwing the three pepper varieties on top of the bowl.

Eating bell peppers now and then does wonders for your health.

Stuffing them with ground chicken, ground pork, or leftover rice will create a tasty, healthy comfort food. However, avoid using green bells if their bitter profile bothers you. Their red siblings are a sweeter and healthier alternative.

Regardless of the color you choose, don’t forget to take out all the seeds and cores that give a bitter tone to the meat. You can get more creative when it comes to the stuffing; something fatty and cheesy will help bring out an amazing dish.

link to Can You Microwave Feta Cheese? Is It Doable Or Not?

For cheese lovers, you probably get familiar with Feta cheese, typical ingredients used in various recipes ranging from appetizers to sweets in Mediterranean cuisine. Accordingly, there are...

Continue Reading
link to Can You Microwave Vacuum-Sealed Bags? Is It Doable?

Did you know? Vacuum-sealed bags have long been an effective method to extend the food’s shelf life by preventing moisture loss, bacteria, freezer burn, and dehydration during long-term...