We’ve all been there.

You make a big pot of soup or chili and put it in your bread bowl, but then find yourself with lots of leftover bread bowl when you’re only one person.

So what do you do?

You could always just eat it plain, but there are other fun things you can do with it too.

Check out some ideas below.

The first option is to make a bread pudding.

The first step is to cut the bread into small cubes.

Then, you need to add some eggs, milk, sugar, and spices to a bowl and mix everything together.

Next, you’ll add the bread cubes to the mixture and stir everything together.

Once everything is mixed together, put it in a baking dish and bake it at 350 degrees for about 30 minutes.

Another quick idea is to make French toast.

Start by cutting the bread into thick slices.

Then, you’ll need to whisk together some eggs, milk, sugar, and vanilla extract.

Dip each slice of bread in the mixture and then cook it in a frying pan over medium heat.

Once it’s cooked, you can add syrup, powdered sugar, or fruit on top.

Another easy option is to make garlic bread.

You need to spread some butter on the bread.

Then, you’ll need to add some garlic powder, salt, and pepper to a bowl and mix everything together.

Next, you’ll spread the mixture on the bread.

Once it’s fully coated, you can either bake it at 350 degrees for about 10 minutes or you can broil it for a few minutes.

If you’re looking for a way to use up the leftover and make your soup or salad more exciting, then you can make croutons.

Start by cutting the bread into small cubes.

Then, you’ll need to add some olive oil, garlic, salt, and pepper to a bowl and mix everything together.

Next, you’ll add the bread cubes to the bowl and stir everything together.

Once everything is coated, spread the croutons out on a baking sheet and bake them at 400 degrees for about 10 minutes.

How about making a grilled cheese sandwich with your leftover?

Next, take two slices of cheese and place them on top of each slice of bread.

Add any other desired toppings, such as ham, tomato, or pesto.

Spread some butter on the outside of the bread.

Place the sandwich on the grill, buttered side down.

Grill for three to four minutes, until the cheese, is melted and the bread is golden brown.

Flip the sandwich and grill for another minute or two.

Slice in half and enjoy.

Use it as stuffing

If you’re looking for a way to use up the leftover and make a holiday meal more special, then you can use it as stuffing.

Start by cutting the bread into small cubes.

Then, you’ll need to add some eggs, broth, vegetables, and spices to a bowl and mix everything together.

Next, you’ll add the bread cubes to the mixture and stir everything together.

Once everything is mixed together, put it in a baking dish and bake it at 350 degrees for about 30 minutes.

Finally, you could also make a panini sandwich with your leftover.

To start, cut the bread bowl in half so that you have two thin slices of bread.

Next, add your favorite sandwich toppings to one slice of bread, and then top it with the other slice.

Place the sandwich on a panini press or in a skillet over medium heat, and cook until the bread is golden brown and the cheese is melted.

Yes, they are edible.

You can eat the bowl and all.

What is Panera’s bread bowl made of?

It is made of a special type of bread that is soft and fluffy on the inside but has a crispy crust on the outside.

This bread is then filled with a variety of different fillings, such as soup, salad, or pasta.

How do I keep my bread bowl from getting soggy?

There are a few things you can do to keep your bowl from getting soggy.

First, make sure to use sturdy bread like a sourdough or ciabatta.

Second, preheat the oven so that the bread has a chance to crisp up before filling it with soup or chili.

Finally, avoid over-filling it so that the soup doesn’t have a chance to soak in.

With these tips, you can enjoy your bowl without worry.

Which is bigger, a bread bowl or a dish?

It is typically larger than a dish.

What is the point? 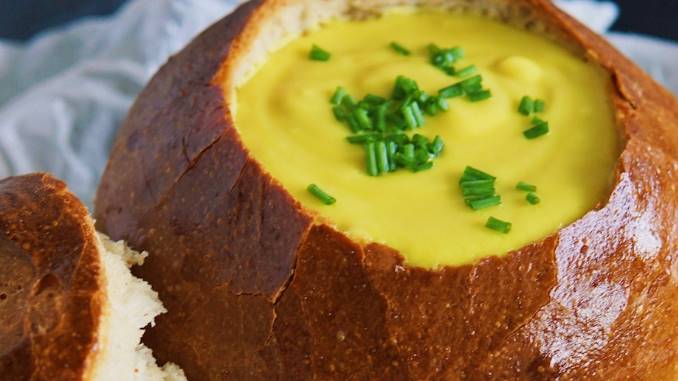 It is a type of bowl made out of bread.

It is often used to serve soup or other types of food.

It allows you to eat the bowl and the food inside it.

How do you use a bread bowl?

They are a delicious and convenient way to enjoy your favorite soups and stews.

To use it, simply tear off a piece of bread and use it to scoop up the desired amount of soup or stew.

The bread will absorb some of the liquid, making it even more flavorful.

Who made bread bowls?

They were first created in the early 1800s by a German baker named August Zang.

He came up with the idea of using a round loaf of bread as a container for soup or stew, and the bread bowl quickly became a popular item on menus across Europe.

Today, they are commonly found in cafes and restaurants in the United States and other countries.

Where did bread bowls start?

They started in Europe, specifically in Germany and France.

The first recorded mention was in France in the 17th century.

The German version called a “brotzeit,” became popular in the 18th century.

Germans would fill their brotzeits with soup or stew and eat them with a spoon.

The French version called a “panade,” was usually filled with milk and eaten as a dessert.

They didn’t become popular in the United States until the early 20th century.

Legend has it that the famous clam chowder at Fisherman’s Wharf was originally served in a bread bowl.

The soup was so popular that people started asking for extra bread to sop up the broth.

Today, they are most commonly associated with New England-style clam chowder.

But you can really put any type of soup or stew in a bread bowl.

Some other popular options include chili, French onion soup, and tomato bisque.

Does Publix have bread bowls?

They are typically located in the deli section near the other pre-made sandwiches.

The bread bowl selection will vary by store, but some of the more popular choices include sourdough, wheat, and rye.

What kind of bread does Panera use for bread bowls?

Panera uses a variety of different pieces of bread for their bread bowls, including sourdough, wheat, and rye (source).

What size does soup come with a Panera bread bowl?

A Panera bread bowl typically contains about 32 ounces of soup.

However, the amount can vary depending on the size and type of bowl used.

Some bowls may contain less soup, while others may have more.

For example, the large soup bowls at Panera Bread usually come with about 40 ounces of soup.

How much are a Panera mac and cheese bread bowl?

Do you toast a bread bowl?

They are typically made out of sourdough bread and are meant to be eaten as is.

If you toast the bread bowl, it will become hard and crunchy, making it difficult to eat.

How do you heat up a Panera bread bowl?

To heat it up, you can use the microwave or the oven.

If you are using the microwave, put it on a microwave-safe plate and heat it for about 45 seconds to 1 minute.

If you are using the oven, preheat it to 350 degrees Fahrenheit and then bake the bread bowl for about 10 minutes.

In short, there are tons of different things that you can do with a bread bowl.

Whether you’re looking for a quick snack or a more elaborate meal, there’s an option for you.

So, the next time you have a bread bowl, don’t throw it away – put it to good use and enjoy.