If you’re like most people, you probably grilled up a bunch of BBQ meat over the weekend.

But now that the leftovers are staring at you in the fridge, you’re not sure what to do with them.

I’ve got some quick and easy ideas for using up that delicious BBQ beef, pork, or chicken.

So put on your thinking cap and get cooking.

The first idea you can try with your leftover BBQ beef is to make slider sandwiches.

Just cook up some bacon slices, then grill or fry up the beef until it’s nice and juicy.

Toast some slider buns, add a few slices of cheese, and top with the bacon and beef.

These are perfect for a quick and easy lunch or dinner.

And I’m sure your family and friends will love them too.

Another idea for using up your leftover BBQ beef is to make a BBQ beef and potato salad.

Start by cooking some diced potatoes in boiling water until they’re soft.

Then mix them with some cooked BBQ beef, diced onions, celery, mayo, and vinegar.

Season the salad to taste with salt and pepper, and give it a good stir.

This is a great dish to take to a potluck or picnic.

If you’ve got leftover BBQ pork, why not make some quesadillas? Just cook up some shredded pork in a skillet until it’s nice and crispy.

Then place it on a tortilla with some shredded cheese and diced onions.

Fold the quesadilla over and cook it until the cheese is melted and the tortilla is crispy.

Serve with sour cream, salsa, or guacamole for a delicious and easy meal.

If you’ve got leftover BBQ chicken, why not wrap it up in a bacon wrap? Just cook up some bacon slices in a skillet until they’re nice and crispy.

Then grill or bake your chicken until it’s cooked through.

Wrapping the chicken and bacon together is a great way to keep it all together and prevent it from falling apart.

And it’s sure to be a hit with your family and friends.

Next, you can try making some easy barbecue sloppy joes.

Start by cooking up some ground beef in a skillet until it’s browned.

Then add in your leftover BBQ meat and stir to combine.

Let the mixture simmer for a few minutes until it’s nice and hot.

Serve the sloppy joes on a bun with some shredded cheese and diced onions.

This one is also pretty simple.

Just cook up some ground beef in a skillet until it’s browned.

Then add it to a bowl of tortilla chips, along with some shredded cheese and diced onions.

Bake the nachos in the oven until the cheese is melted and bubbly.

Serve with salsa, sour cream, or guacamole for a tasty and easy snack or meal.

My final idea for using up your leftover BBQ chicken is to make a grilled BBQ chicken pizza.

Start by preheating your oven to 450 degrees F.

Then roll out a pizza crust on a baking sheet.

Spread some BBQ leftovers over the crust, then top with grilled chicken, diced tomatoes, and shredded cheese.

Bake the pizza in the oven for about 15 minutes, or until the cheese is melted and bubbly.

This pizza is sure to be a hit with everyone.

What meats are good for BBQ?

The types of meat that are best for BBQing are pork, beef, chicken, and lamb.

They all have their own unique flavors that come out when grilled, so it really just depends on what you’re in the mood for.

Pork is a popular choice because it’s relatively lean and has a great flavor.

Beef is another good option, especially if you’re looking for something that’s going to be a bit more savory.

Chicken is always a safe choice, and lamb can be a nice change of pace if you’re looking for something a little different.

No matter what you choose, make sure to cook it over indirect heat so that it doesn’t get too charred on the outside (source).

What is the best way to BBQ meat?

The best way to BBQ meat is to use a smoker.

This will give the meat a smoky flavor that you can’t get with other methods.

Make sure to keep the temperature low, so that the meat cooks slowly and evenly.

You’ll also want to use wood chips to add flavor to the meat (source).

What is typical BBQ food?

There are many different types of BBQ food, but some of the most common items include ribs, chicken, pork, and beef.

These items are typically cooked on a grill or smoker, and they can be served with various sauces and sides.

BBQ food is often considered to be comfort food, and it is a popular choice for parties and gatherings.

What is the best-selling BBQ meat in the summer?

In summer, the best-selling BBQ meat is chicken.

It’s easy to cook, and most people like it.

Plus, there are lots of different ways to prepare it.

You can either grill it or bake it in the oven.

Another popular BBQ meat is hamburgers.

People love to eat them at cookouts and parties.

They’re also very affordable, which is another reason why they’re so popular.

What should you cook first on a BBQ?

You should cook the food that takes the longest to cook first.

This way, you can enjoy your food while it is still hot.

Hamburgers, hot dogs, and chicken are all good choices for the first item on the BBQ (source).

How to pre-cook meat for BBQ?

There are a few ways to pre-cook meat for BBQ.

You can either bake, grill, or sauté the meat before putting it on the BBQ.

Baking is a good option if you want to cook the meat all the way through.

Just place the meat on a baking sheet and bake at 400 degrees until it’s cooked through.

Grilling is a good option if you want to give the meat a nice char.

Place the meat on the grill and cook until it’s charred on the outside but still pink in the middle.

Sautéing is a good option if you want to get a little bit of browning on the meat.

Just heat some oil in a pan over medium-high heat and cook the meat until it’s browned on the outside.

Once the meat is pre-cooked, you can put it on the BBQ and finish cooking it.

Just make sure to keep an eye on it so that it doesn’t burn.

What kind of beef is used for BBQ?

The most common type of beef used for BBQ is the chuck roast.

This cut comes from the shoulder of the cow and is a great choice because it has a lot of marbling, which means it will be tender and juicy when cooked.

You could also use brisket, ribeye, or sirloin steak for your BBQ.

Whatever type of beef you choose, make sure to season it generously with your favorite spices before cooking.

Is BBQ good for health? 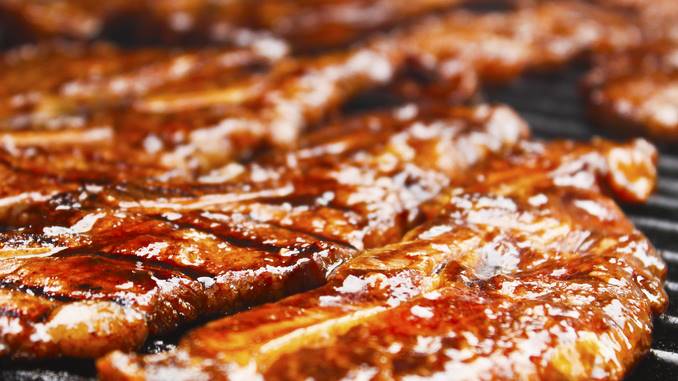 In general, no, BBQ is not good for your health.

These chemicals can form when the fat from meat drips onto the heat source, creating smoke that contains PAHs.

When you eat food that’s been BBQed, you can inhale these harmful chemicals, and they can also stick to your food.

There are ways to reduce your exposure to PAHs when BBQing, though.

First, trim any fat from the meat before cooking, and avoid overcooking your food.

Also, try not to BBQ in direct sunlight or near other items that can create smoke, like charcoal grills.

If you can, use a gas grill instead.

Finally, wash your hands and any exposed skin after cooking, and avoid eating BBQed food straight from the grill.

What can I cook on a BBQ?

There are endless possibilities when it comes to cooking on a BBQ, but some of my favorites include burgers, kebabs, chicken, and ribs.

Whatever you choose to cook, be sure to have plenty of sauce or marinade on hand to add flavor.

Do you oil meat before BBQ?

Many people believe that you should oil meat before putting it on the BBQ.

This is because the oil will help to keep the meat from sticking to the grill, and it will also add some extra flavor.

However, there are others who believe that you do not need to oil meat before BBQing it, as the high heat will cause the meat to release its own oils.

Ultimately, it is up to you whether or not you want to oil your meat before BBQing it (source).

These are just a few ideas for using up your leftover BBQ meat.

So get creative and have some fun with it.

With a little imagination, you can turn that BBQ meat into a delicious and satisfying meal.

Tell me which one would you like to try first.