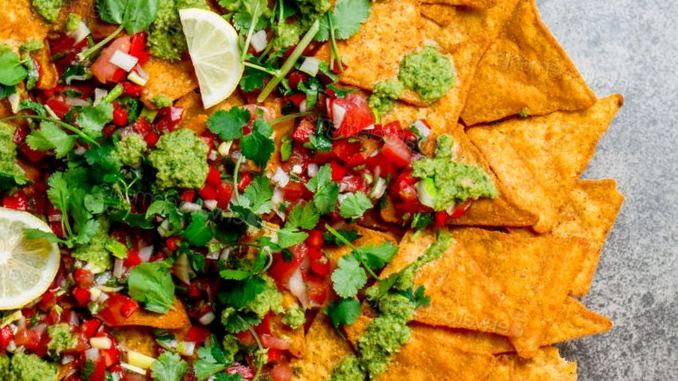 You have come across many articles that utilize the words totopos and tortillas interchangeably. Yet, there isn’t any blog that illustrates a detailed comparison between these two dishes. So, you may be confused: Are they really the same?

Find out the critical similarities and differences between totopos vs tortilla chips below so that you can have a profound understanding of the food and know how to use it appropriately.

4 Similarities Between Totopos vs Tortilla Chips

There are several aspects in common, ranging from their origins, production process to their textures and flavors. Thus, in several cases, they serve as different names of the same dish.

Both these two come from a beautiful country with rich traditional culinary culture – Mexico.

The word “totopos” was born out of the Nahuatl word “tlaxacaltotopochtli,” which is the combination of two Nahuatl words: “tlaxacal” and “totopochtli,” respectively meaning “tortilla” and “something noisy to eat.” Thus, totopos is a crispy tortilla that arouses some noise while eating. Consequently, the term “tortilla chip” is typically used to describe the fried tortilla.

In the past, after any feast, there were some leftover tortillas. It would be inappropriate to throw them away, so Mexican people decided to fry these leftover ingredients and crush them into pieces to enjoy. Together with totopos, it has gained particular popularity, eventually becoming an integral part of Mexican cuisine.

Nowadays, people have slightly changed the way they cook totopos and tortilla chips. For instance, instead of leftover tortillas, it is recommended that you utilize freshly-made corn tortillas as the main ingredients.

Homemade tortillas typically help enhance the flavor as well as the crunchiness of these beautiful snacks. Yet, you should dry this homemade flatbread under the sun for at least an hour. This is because utilizing dried tortillas usually leads to firmer and crispier totopos.

Moreover, rather than baking tortillas as a whole, people turn to cut this Mexican flatbread into several pieces in any shape of preferences, for example, triangle, rectangle, or small circle. After that, they either fry, air fry, or bake tortillas until they become crispy.

To bring delicious flavors to these corn snacks, the cooks may coat these chips with spices. Otherwise, you also can dip them into sauces of your choice or try them with some special salads, such as Mexican Ceviche.

Going through a similar production process, the 2 recipes usually share the same textures. Both are crispy, snappy, and crunchy.

Those significant textures are profoundly affected by several factors, for example, the thickness of raw tortillas and the temperature at which they are cooked. However, if they are prepared perfectly, most totopos and tortilla chips will reach the standard texture.

Because they are both made from corn tortillas, you will feel good corn flavors and a bit of saltiness while enjoying these two. Nevertheless, it is vital to acknowledge that, owing to the slightly bland flavors, totopos and tortilla chips can go well with many other sauces or spices, allowing these intense flavors to shine.

Mexican people usually dip these snacks in guacamole, a delicious mashed avocado dish, creamy tuna dip, or serve them with robust flavored soups or salad. As a result, you may appreciate not only their crunchy texture but also the exquisite flavors from a variety of toppings and salsa that they combine with.

The only difference between totopos and tortilla chips is how these two terms may be perceived distinctively in another context.

Specifically, the former can be considered toasted tortillas that have some holes within their surfaces. Zapotec people, who make both ends meet in the Isthmus of Tehuantepec, which is located in southern Mexico, usually bake these great tortillas on the sides of a comixcal or comizcal, which is a clay oven in the Mexican language. Under this circumstance, tortilla chips cannot substitute for totopos.

What Makes A Good Tortilla Chip?

A sound tortilla chip should be crispy, crunchy, and snappy with some corn and salty flavors.

Yet, to cook these chips perfectly, you first need to purchase or prepare some fresh thin tortillas because the proper thickness will facilitate firmer textures. Besides, be mindful of the temperature when baking, frying, or air-frying these tortillas. Too hot temperatures may get your chips to burn quickly, which is genuinely undesirable.

Totopos can contribute as one of the main ingredients to make tasty and flavorful nachos, but they are not exactly nachos.

To be more specific, nachos refer to a Mexican dish that is full of heated totopos, or tortilla chips, and some melted cheese or savory toppings such as salsa, lettuce, and sour cream. Thus, totopos are only part of them.