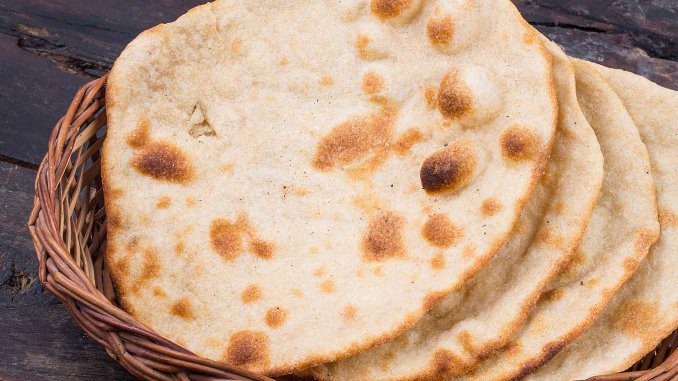 Tortilla and roti may easily confuse many people since they appear pretty similar. Yet, it is crucial to emphasize that they differ in various aspects. Check out the critical differences between tortilla vs roti in our article to make an informed decision!

Tortilla serves as one of the indispensable ingredients in Mexican cuisine since it is typically used to wrap burritos and tacos. This Mexican version of flatbread is made from a mixture of whole wheat or corn flour, fat (normally vegetable shortening or lard), warm water, and salt.

Besides, it is formed at an approximately 90% gluten development, thus maintaining high pliability, making it genuinely suitable for wrapping traditional Mexican dishes.

Unlike tortillas, roti derives from Indian cuisine. Also, in comparison with its corresponding counterpart, the creation of this Indian flatbread requires only two key ingredients, namely whole wheat flour and water. Hence, roti is kneaded at only around 40% gluten development, making it more delicate, especially when wrapping.

As a result, roti is usually served in many side dishes. For instance, people tear roti off and dip it into some flavorful sauces.

5 Key Differences Between Tortilla Vs Roti

Tortilla and roti share some characteristics, such as the key ingredients (water, flour). Yet, they remarkably distinguish each other in the five critical aspects: origins, ingredients, texture, usage, and taste.

These two are not appreciated in the same cuisine. Tortilla is more prevalent among Mexican people as they love to wrap this with a ton of tasty and unique toppings or fillings to make tacos and burritos. In contrast, roti often devotes itself to Indian cuisine as a part of the people’s favorite side dishes.

As can be seen, it becomes a little more complicated to make tortillas as they need some extra ingredients such as shortening and salt. Shortening, even vegetable or animal one, is of great importance because it adds a smoother texture to this Mexican flatbread. Also, salt is an important seasoning that enhances the overall flavor.

On the other hand, roti is typically eaten with some spicy and delicious sauces. Hence, salt is not too necessary. Moreover, sometimes, people can still make roti without employing any oil.

Another difference is the temperature of water used to produce them. If you plan to create tortillas, slowly pour warm water into the mixture and knead the dough until smooth. This kind of water presents you with a more elastic chewy dough, while water at room temperature, regularly used to make roti, brings a short, crumbled one.

Finally, it is vital to note that tortillas can be made from corn or wheat flour, whereas you should only use wheat flour to create roti.

Without a doubt, tortillas are famous for their flexibility. No matter how many fillings or toppings you put into or on it, this flatbread is merely broken. Therefore, they are mainly served as the wrap for several Mexican dishes.

On the contrary, Indian roti was first produced to be pulled to pieces that can carry all the excellent sauces. Obviously, with its breakability, roti is not customarily utilized to wrap any food.

As mentioned above, tortillas are usually served with tacos and burritos. However, several more recipes also include them, such as enchiladas, Migas, soup, or fried rice.

Rather than just wrapping them up with some toppings, you can try deep frying tortillas or tearing them into pieces before stir-fry so that they can become impressively crispy and tasty.

Tortilla’s corresponding flatbread, roti, is conventionally dipped in some unique sauces to enhance its flavor. Nevertheless, it is not the only method to take advantage of roti. You can even make Baida Roti, popular Indian finger food, by coating roti in eggs, frying them, then rolling them up with any filling you prefer.

Moreover, with various forms of roti worldwide, feel free to try some unique ways to eat roti. You may be blown away by how flavorful they turn into.

The tortilla made out of cornflour often tastes a little sweeter, while roti brings you some more wheat flavor as they always have wheat flour as the main ingredient.

What Is A Healthy Alternative To Flour Tortilla?

If you look for a healthier option of flour tortillas, corn tortilla, often considered a whole grain, may be the best alternative.

One serving of corn tortilla only provides you with 96 calories, while the flour one contains over 135 calories. Besides, it also has a good amount of fiber and magnesium. Both are beneficial to your heart and brain.

Are Naan And Roti The Same?

Unfortunately, no. Though both come from the Indian cuisine, naan distinguishes itself remarkably from roti because naan is a leavened flatbread. This means naan is much heavier, bigger than roti, and it has some filling inside. Roti, on the other hand, is unleavened flatbread. Thus, it is pretty light and flat.

Which Is Worse: Tortilla Or Bread?

Though tortilla typically contains fewer calories than bread, it does not necessarily mean being the healthier one.

Indeed, both are good sources of carbs, fiber and are beneficial to your health. Besides, some whole-grain bread is also suitable for people on a diet. Therefore, it is suggested that you check both options’ nutrition on their packages before purchasing.