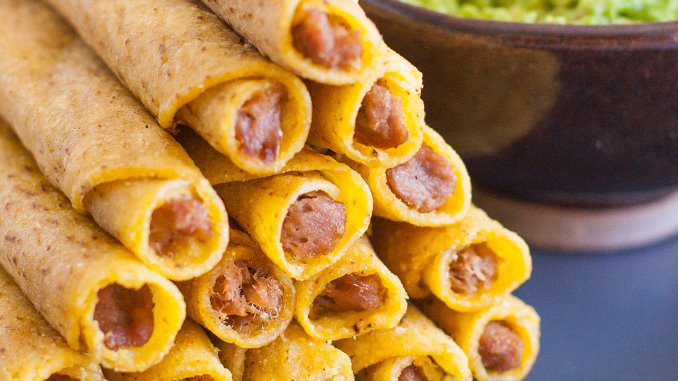 Taquitos vs Flautas has always been a heated comparison topic since many people (especially those who aren’t Mexican cuisine lovers) don’t know how to distinguish these two dishes. Indeed, they do appear very similar.

If you’re also one of the people above, today’s post will lend you a hand in differentiating these two delicacies.

The Main Differences Between Taquitos And Flautas

Taquitos (meaning “little tacos”) refers to the small folded tortillas loaded with meat or poultry and garnished with shredded cheese, subsequently deep-fried or shallow-fried until golden.

This Mexican street food, often known as rolled tacos, resembles a hand-held delicacy that people can enjoy when out and about.

They are more common in the middle and southern parts of the country than in the north. However, as popular as it is in Mexico, many people believe this snack originated in the US.

Numerous sources credit the origin of taquitos to one Ralph Pesqueira Jr., owner of a San Diego tortilla business. Pesqueira created it in the 1940s to increase his profits, according to Tex-Mex culinary lore.

On the other hand, Flautas in Spain means flutes. Although these treats feature similar components in taquitos, they usually look like cones.

No one remembers when and where they came from, but the Mexican province of Sinaloa acknowledges Flautas as one of its distinctive gourmet delicacies. More often than not, you’ll find them in the northern cities of Mexico.

Between these 2 Mexican meals, perhaps the most noticeable difference is the kind of wrapper utilized to make them. Usually, there are two main types of tortillas: corn and wheat, in which people use corn wrappers to make taquitos and wheat tortillas to make Flautas.

This distinction emerges from their unique backgrounds and ingredient adaptations in their birthplaces.

Corn tortillas are a classic in nearly every Mexican traditional dish. In contrast, wheat tortillas are a favorite in Tex-Mex culture for a relatively brief fact: they’re the staple in their regions.

As a result of the country’s geology, maize is available throughout the central and south sides of the country. Considering they’ve thrived in Mexican society for centuries as a crucial agricultural commodity, it’s no surprise that they play a significant role in the region’s food, including the taquitos.

In contrast, wheat was not accessible in Mexico until the Spanish conquerors arrived, carrying the seeds from Europe and bringing them to North America. Also known as Tex-Mex tortillas, wheat wrappers were only available in the north sides of Mexico (where people assume the origin of Flautas) and the United States at the time.

The size of Flautas and taquitos might be a determining factor when comparing the two. Indeed, Flautas are longer and thinner than classic taquitos. Some parts of Mexico even make them at about the same size as a burrito.

On the other hand, taquitos are the shortened forms, made with traditional mid-sized corn wrappers or even small bite-sized ones if you want to serve them as a treat or appetizer instead of the main course.

The shape of the taquitos is an essential indicator to many people. Usually, Mexicans meticulously roll the wrappers to be spherical and fry them in plenty of oil to maintain the desired cone shape of Flautas.

Instead of rolling the wrapper, people tend to lightly fold taquitos in half twice, creating a slightly flattened dish cooked in considerably less oil. The result is a folded, tube-shaped specialty.

How Do You Keep Taquitos And Flautas Crunchy?

We’ve been there: making the taquitos and Flautas way too early, and when focusing on finishing the rest of the dinner, the rolls have already lost their warmth and crisps.

To tackle this issue, arrange these fried wraps (in a thin line if feasible) on a wire rack, set them on a baking tray, and put everything in a heated oven.

How Do You Roll Taquitos And Flautas Without Breaking Them?

Preparing a heap of tortillas in moistened towel sheets or dampened cooking towels to prevent cracks while making these dishes. Then, in cling film or in a microwave-safe Ziploc pouch (make sure the bag is open for better ventilation). Finally, put the bag in the microwave for about 1 min, or until the wrappers are toasty and soft.

How Do You Get Taquitos And Flautas To Stick?

We know many of you are suffering from open-mouthed taquitos and Flautas. This problem makes it trickier to enjoy the dishes without the fillings falling and steals the aesthetics of the dish.

To prevent this, fold the tortillas firmly, leaving no area left in the wraps. This makes it easier to cook and prevents the oil from going into your rolls. If needed, use a toothpick to prevent these wraps from loosening before cooking.

How Do People Serve Taquitos And Flautas?

Despite their distinctions, restaurants tend to present Flautas and taquitos similarly: covered with or on a pile of minced cabbage or cabbage, occasionally followed by cubed tomatoes, onions, and avocados.

In addition to the topping cheese and sour cream, many people also prefer to eat them with a combination of 2 or multiple dressings (commonly red and green chili condiments). If you want fusion taquitos or Flautas, it’s advisable to try them with some guacamole and beans.

But there is a way for you to enjoy this delicacy without gaining weight. To prepare healthy taquitos, bake the wrappers rather than deep-frying them. You may lose lots of calories, salt contents, and fat intake by doing so.