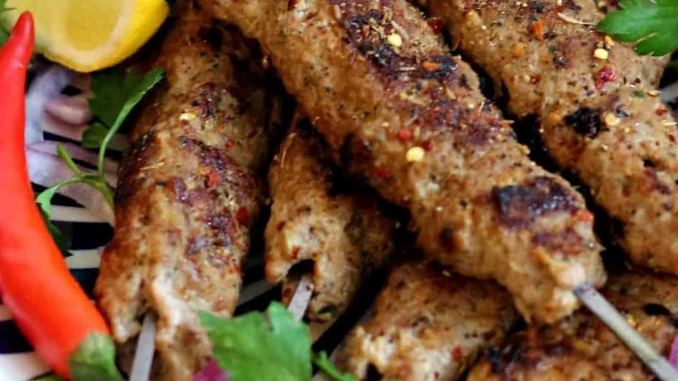 Taco and kebab have become common and can be seen in roadside restaurants.

However, many people are curious about the parallels and differences between these two foods. This article will help you comprehend the distinctions between tacos vs kebab by providing relevant information.

The first similarity is the same serving. Tacos and kebab are usually eaten with a tortilla and a filling. However, these two meals’ cooking methods and ingredients are significantly different.

Secondly, they both are pretty spicy. The tacos are frequently served with a spicy green chili sauce or a more flavorful red chili sauce. Meanwhile, the pepper-rich sauce and Turkish spices like cumin, hot pepper flakes, and paprika make the kebab spicy.

5 Significant Differences Of Tacos Vs Kebab

In Mexico in the 18th century, tacos were primarily popular among miners, described as a paper wounding around the gunpowder inserted into the rock face in silver mining.

Over time, they have become increasingly popular. Eventually, Mexicans migrated to America and introduced this great dish into today’s countries.

The name Kebab comes from the Persian “kabap,” which means fried. Some people believe that in the Middle Ages, the kebab was created by Persian troops. These people roasted meat over open fires by using their swords.

During different periods of the Islamic Empire, it became more prevalent, served in royal houses and even ordinary people who enjoyed it as their breakfast.

Tacos must include the following components: a tortilla or shell, meat or fish filling, vegetables, sauces, cheese salsa, and guacamole. The cook use meat such as beef, pork, chicken, seafood, beans, and cheese to make the perfect recipe.

On the other hand, it is hard to determine the kebab recipe, which typically contains lamb and beef. However, it can also be produced from chicken and fish. Pork is never used in kebabs by Muslims, but non-Muslim vendors occasionally use it.

Besides, kebabs can be eaten with a tortilla and vegetables such as lettuce, sliced tomato, and onions. Then use sauce Blanche or a mayo-yogurt sauce to make it perfect.

Kebab is a general name for various meat skewers. First, the marinated meat and vegetables are threaded onto skewers and cooked over hot coals. After that, diners can eat kebabs with a tortilla or bread and sauce.

Meanwhile, tacos are prepared from a crunchy cornmeal or flour exterior and colorful fillings. Their outer shell will be fried to soften and fold with the contents. The fillings include meat and vegetables such as beef, pork, fish, chicken, tomato sauce, mushrooms, chile, etc…all will be grilled (or steamed) together.

Overall, tacos are a great low-calorie food that is packed in protein and fiber. For example, one taco (100g) provides approximately 226kcal. However, certain spices or supplements might drastically increase calorie, fat, or salt intake.

The nutritional value of kebabs may surprise you. A typical serving has roughly 2,000 calories, about 80% of your GDA, and almost twice as much salt as you need. In addition, even before you add the sauce, it contains a lot of artificial trans fats. To burn off these calories, you need to run for more than 2 hours or cycle over 3 hours.

Is Kebab Healthier Than Pizza?

Yes. Kebab is healthier than pizza because it contains a diversity of vegetables, including lettuce, potato, tomato, etc., which benefits you with various nutrients.

Kebab has many excellent components. It is not only filled with deliciously fresh ingredients ranging from grilled meats to veggies, but it also comes with tasty sauces. The various sauces, fresh vegetables, and grilled meats combine to produce a wonderful kebab dish for all tastes.

Which Country Eats The Most Tacos?

That’s Norway. According to a 2012 VG study, 400,000 Norwegians, 8.2 percent of the population, eat tacos every Friday night. The dish is more popular than the legendary frozen Grandiosa pizza. So it’s not an exaggeration to claim that Norwegians are addicted to tacos.

What Kind Of Tortillas Are Used For Tacos?

Corn tortillas are the answer. These tortillas are ideal for tacos (both the standard and street version) and taquitos. On the other hand, flour tortillas are a good fit and consistency for burritos and quesadillas.