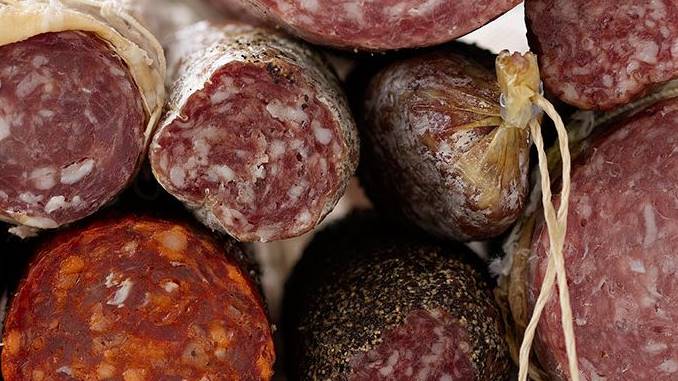 Salami and pepperoni may appear familiar, as you usually see them both on pizza. Yet, they are not identical. There are several critical differences between salami vs pepperoni that you should acknowledge beforehand.

These understandings will help you make an informed decision to purchase the right kind of sausages which suit your taste the best.

If you are a food lover, the most apparent sign to identify their differences is taste. Because pepperoni is the smoked sausage made with pork, beef, and lots of paprika plus chili pepper, its flavor is smoky, peppery, and much spicier.

Meanwhile, the conventional ingredients utilized to cook salami consist of vinegar, salt, garlic, herbs, white pepper, and grounded fat. Hence, its spice is more herby than pepperoni. Also, sometimes, you may not even feel any spice in salami at all.

Moreover, contrary to salami’s typical texture, pepperoni has impressed many people with its relatively soft one. Besides being well-known for its smoky aroma, pepperoni goes well with pizza, whereas its corresponding sausage is versatile, thus served in both cold and hot dishes.

Above are a few brief explanations of some key differences between the two. However, to obtain profound understandings of what makes them distinguished, you should have a closer look at each. Keep on reading!

Salami is rooted in Italian cuisine. It is believed to have been first invented 2,000 years ago since salami’s curing method helps preserve meat for a longer time.

The ingredients utilized in the recipes are diverse since pork, chopped beef, or poultry, can all be the options.

Besides, it is possible to form salami by choosing various herbs to mix with the cook’s preferred meat types and other ingredients such as salt, vinegar, garlic, nitrate.

Hence, there are many versions and recipes available, empowering this food to come in multiple tastes and specialties. However, since most recipes always have herbs and a mild amount of spices, salami’s tastes are pretty herby and not too spicy.

What’s more, it is crucial to emphasize that the portion of meat picked should always contain a tremendous amount of fat. This characteristic made this food a high-fat content, becoming one of the Italians’ favorite lunch meat. In addition, the high-fat ratio also distinguishes it significantly from the pepperoni.

Pepperoni was first created by several Italian immigrants in the United States. This origin results in its being typically considered an American version of the Italian salami.

Nonetheless, unlike salami which can be produced from many types of meat, pepperoni is usually the combination of cured pork and beef. To make pepperoni, cooks carefully trim the meat to balance the ratio between fat and meat. Then, all the meat is finely ground before it is mixed with spices including but not limited to black peppers, paprika, chili peppers, and garlic. After fermentation, smoking, and drying, the mixture is stuffed into casings.

Since pepperoni’s recipe is pretty different from salami’s, this food turns out to be more peppery, spicy, and smoky than its corresponding type of sausage. What’s more, since its meat is more fine-grained than the one used in salami, pepperoni appears softer. Its deep taste and texture make pepperoni many people’s favorite ingredients for pizza. Under the heat, the spices blend in very well with other toppings, while pepperoni slices become crispy and smoky.

Experts suggest that whereas pepperoni can be considered one kind of salami, salami is a term referred to numerous types of cured sausages deriving from Italian cuisine. Thus, it is reasonable that these two may have several characteristics in common. Yet, each has its unique taste, texture, recipe, and usage.

Where Does Chorizo Fit In?

Chorizo, another type of sausage, may confuse you with salami and pepperoni. But, honestly, it is difficult to affirm where chorizo fits in because it resembles both.

The most popular kinds of chorizo are Spanish chorizo and Mexican chorizo.

This Spanish version of sausage also utilizes several spices, which makes it interchangeable with pepperoni at some points. Nevertheless, it is pretty similar to salami as Spanish chorizo uses herbs and can be eaten straightforward.

On the other hand, Mexican chorizo is a favorite pizza topping in Mexico. Using green chilies, it is spicier than the Spanish version, thus bearing a resemblance to pepperoni. Yet, Mexican chorizo shares some similarities with salami as it can include a variety of meat such as turkey, beef, pork, venison, or chicken.

Which Is Better On Pizza?

There has been a lengthy debate between salami vs pepperoni lovers on which can be the better ingredient used for pizza. Unfortunately, it remains impossible to declare the winner since they are flavorful on this Italian dish.

Pepperoni may be the champion in your heart if you prefer some spices on pizza as pepperoni is much spicer and more seasoned than its corresponding opponent does. Yet, on the other hand, in case that your favorite taste is the chunky and herby brought by salami, you may find this cured sausage much more satisfying on pizza.

What Are The White Bits In Salami?

Since salami is usually a high-fat food, the white bits you witness on its surface may be the actual fat. This fat enriches the flavor and texture. Thus, you can be assured that these fat white bits are edible and safe to eat.

Nevertheless, under some circumstances, these white elements can be molds. Salami is formed through the curing method, making it possible for these spores of molds, called Penicillium, to appear on the surface after fermentation. Yet, you do not need to be worried. These molds shield the food from any bacteria growth through the drying process. Also, they are not harmful.

Where Does The Name ‘Salami’ Come From?

In English, the name salami originates from the food’s name in Italian – salame.

Sale in Italian means salt. To indicate the significant amount of salt, Italian people use salame, as the plural form of sale is formed by removing its letter “e” and adding the suffix “ame.” Hence, salami in Italian was named after the word salame, which signifies “lots of salt.” This naming is pretty apparent since the first version of salami filling was the mixture of pork with lots of salt put into casings.

When salame arrived at the English-speaking countries, salame is twisted to become “salami” as the replacement of “e” with “i” turns it from the single to the plural form, implying that there are several slices of Italian “salame” on the plate.

Can Salami Be Halal?

According to Islamic law, apart from pork and any food made from this type of meat, all other food is regarded as “halal” in Arabic, which means lawful in English. As a result, people who practice Islam are never allowed to consume pork in any form.

Thus, in some cases, varieties of salami that have pork in their recipes cannot be considered halal. Nevertheless, other versions that utilize only beef, turkey, chicken, or any meat except for pork are, in fact, halal. Thus, carefully checking the food’s ingredients in advance, Muslims may be able to find some halal salami.

Can You Eat These Two Types of Food Raw?

Pepperoni, as a dry-cured sausage, can be eaten uncooked. The natural fermentation process in curing helps generate Lactic acid, which is able to destroy all kinds of bacteria and stop them from regrowing. Thus, it is safe to consume fresh uncooked pepperoni. Just cut them into some thin or thick slices, then you can taste them immediately without cooking.

Nonetheless, its smoky flavor can be intensified through heat. Thus, professionals advise pouring pepperoni on pizza or any other hot dish so that you can fully enjoy its exceptional taste.

Of course. As mentioned above, the curing process allows salami and pepperoni, to become ready to eat. Therefore, you are free to try it right after taking it out of its package.

Moreover, since it is tasty, especially when served cold, experts highly recommend using salami to make antipasto. So, you can have an excellent appetizer out of this unique cured sausage.

Are pork and steak popular types of ingredients for these two foods?

Does Pepperoni Or Salami Have More Calories?

Usually, 3-ounces of salami provides you with 419 calories, while the same serving of pepperoni presents 540 calories. Consequently, pepperoni does likely have more calories than its corresponding sausage.

However, since salami has several versions and recipes, that is not always the case. Therefore, before purchasing, you should refer to the product’s nutrition table and identify its particular macronutrients, vitamins, or minerals to make an informed decision.