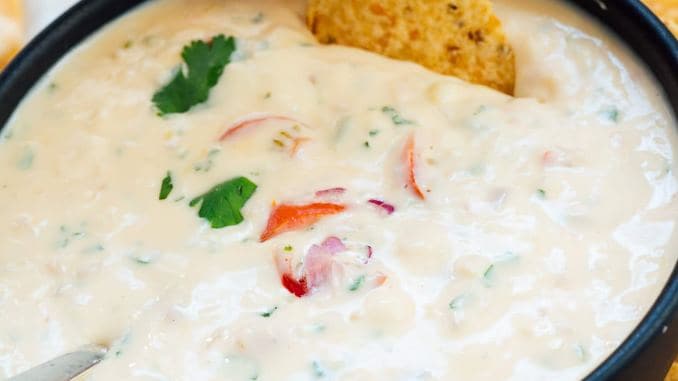 Tex-Mex diners love queso and nacho cheese that produce excellent dipping sauces. However, many people have difficulty distinguishing between them. This article will provide the similarities and differences between these two.

In general, these two recipes have two pretty similar characteristics. The first is their color. Both types often have a yellow tint and salty flavor. However, queso can also be white.

Secondly, they are both used as popular dipping sauces in the United States and Mexico. They are typically served with tortillas, chips, and other dishes.

In 1900, Otis Farnsworth produced and served queso in his Mexican restaurant in San Antonio. After that, in the early 1920s, a group of San Antonio women collaborated to write a cookbook that reveals how to prepare the dish. Since then, it has increased in popularity, encouraging many different cultures to create variations, such as Kimchi queso.

In 1943, Ignacio Anaya Garcia was the first to pour melted yellow cheese and chopped jalapenos over chips. Then the dish nachos became popular. At the time, people were interested in the type of cheese that was sprinkled over food and slapped this name on it.

However, the one on the nachos was real cheese with a short shelf life. That’s why Frank Liberto developed a recipe made with actual cheese and “secret ingredients”. This recipe did not require heating to taste and could be stored for an extended period.

Unlike traditional food, nacho cheese does not have specific ingredients. Instead, companies can create it in their unique style. It means manufacturers can put anything in a jar to produce their own variant.

However, most producers employ cheese whey, various spices, oils, and colorants to make the products we all know and love.

Queso has always been known as a thick and creamy melted cheese frequently used as a dipping sauce. In comparison, nacho is not real cheese. According to USDA, it has no taxonomic definition.

Some individuals believe that nacho cheese is a processed product that has been melted with chile and other tastes. There is no legal definition of it based on a specified ingredient list, procedure, or quality.

The nutritional content is a significant difference between queso vs nacho. The former is a better choice than other aged cheeses due to its lower sodium and fat content. In addition, it contains vitamin A, vitamin C, and calcium. Also, it is a terrific addition to your dishes if you follow a lacto-vegetarian diet.

On the other hand, the latter is high in salt. Moreover, it has roughly 400 calories, about half of them from fat. As a result, it is not a perfect item for those seeking to reduce weight or healthy people.

Why Is Queso So Expensive?

Queso is expensive because it is not included in your bowl or dish like other regular types of milk-based products. If you want to enjoy it, you must order and pay more.

Is White Queso Better Than Yellow?

As you would know, queso is often available in two colors: white and yellow. However, the white variant is always a better choice because it is smoother and creamier. Go for it if you want a fantastic dip for your chips.

What Is The Best Nacho Cheese Brand?

There are numerous brands available around the world. It would be remiss not to include the following companies:

How Do You Heat Canned Nacho Cheese?

Microwave it for 5 minutes in a bowl. For the first 3 minutes of cooking, stir the cheese every minute. Then stir it every 30 seconds for the last 2 minutes. At the end of the reheating procedure, it will be warm and fresh, not runny.