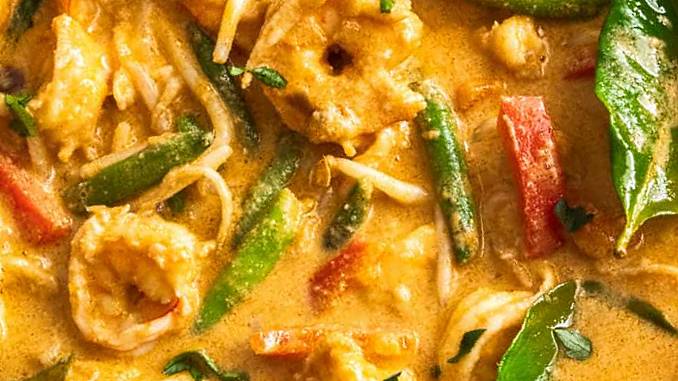 Curries are one of the most famous dishes worldwide. Indeed, many countries and cultures develop different versions of the dish and make curries even more popular and widespread.

But sometimes, it’s hard to distinguish between their different fusions, especially Panang curry and red curry.

If you want to know more about these 2 dishes, today’s post is for you.

What Is Panang Curry?

Panang curry (so-called Penang or Penang) is a renowned spicy dish from Penang, a Malaysian island off the coast.

Because it utilizes fewer red peppers, it tastes typically less intense than classic red curry. However, its spiciness still hits hard. Moreover, it is much sweeter than Thai curries since it contains coconut milk and peanuts as its main components.

What Is Red Curry?

The reddish color of this dish comes from the red peppers that people utilize to make the dish. However, many cooks nowadays prefer to use pepper flakes instead of real red chilies to offer the meal a darker red and richer taste.

Also, its paste which in Thai refers to as kreung gaeng phet Daeng acts as the base of so many dishes. Indeed, nowadays, several different recipes of this food involve this ingredient.

Why Do People Often Confuse These Two?

There are numerous similarities between these two that cause most diners to mistake the two. To begin with, they are all red and fiery.

Surprisingly, Thais have no idea that red curry exists! All curry with a reddish tone, namely Panang curries, falls under this broad phrase.

Different red curries, including Gaeng Ped, taste similar to what we identify as Thai red curry in the United States. Thus, to tell the differences between Panang and red curry, we’ll apply the US norms.

Reputedly fiery Thai cuisine may be available all over the world. However, every curry could be excessively intense if you don’t have the proper taste buds. In addition, Thai curries vary significantly in their amount of spiciness.

Indeed, there are up to three levels of spiciness in regular curries: mild, mellow, and hot.

Besides the difference in the spiciness scale, these two also differ from one another when it comes to taste and consistency.

Fish sauce and shrimp sauce give red curry its acidic and peppery taste. The same ingredients also exist in Panang curry, but there are a few other seasonings as well.

In Panang, peanuts are the key ingredient that transforms the dish’s flavor profile. Thanks to the sweetness of the peanuts, the intensity of this dish will become milder.

Moreover, the red one preparation calls for more peppers, while the Panang version calls for fewer. As a result of such a large number of overlapping ingredients, there is a significant variance in taste.

Indeed, some red curry dishes also involve tomato juice as one of the ingredients, which reduces its intensity and makes it highly flavorful.

When it comes to consistency, this one is watery and slushy, whereas the Panang one is thicker. Due to the differences in preparation, people serve each of these curries alongside various foods.

It’s important to note that Panang and red curries get served differently because of their unique flavors and textures.

As mentioned previously, the red or has a runny texture, which helps it become the famous base of many soups in most Thai restaurants.

On the other hand, Panang is thicker. Therefore, people don’t usually serve it as soup. Instead, most eateries pair Panang with rice. However, it is up to you how you serve these delicacies in your meal.

It’s important to note that there is no specific answer to which one is better. Those who want acidic and fiery curries should opt for the red curry version. On the other hand, Panang curry is a good choice if you prefer it rich and velvety.

Please remember your heat endurance as well as your taste. You can start with Panang if you’re not used to fiery dishes. On the other hand, your stomach may not like an unexpected surge of spicy curries.

Specific cooking tips will allow you to get the most out of your components and ideas, whether you’re making a red curry or Panang ones. Unfortunately, due to omitting such important details, many home cooks cannot recreate the Thai curry they enjoyed at the Thai restaurants.

After selecting a recipe to execute, please apply the below guidelines:

Thai curries are excellent since each component contributes to the luscious taste. Slowing down is the key to unleashing the true essence of each ingredient.

Thus, manage the temperature from low to medium and bide your time with each phase. If you overheat the contents, they will lose their taste, but cooking them for enough time will improve the flavor and aroma.

Moreover, it’s also advisable to stir-fry the paste in oil. Before adding the curry paste into the oil, ensure that it is boiling as introducing it to oil that isn’t at the proper temperature will spoil the taste.

Finally, we suggest letting the protein braise until the curry paste has unleashed its richness. Thanks to this, the meat, seafood, veggie, or any additional component of your choice will exude lots of aroma and taste. Indeed, the more taste the ingredients collect from the curry, the longer the dish takes.

Most people couldn’t stand the chilies’ effects in curry, but that doesn’t imply it’s terrible for your health. On the contrary, this delicacy contains many seasonings and spices with curative properties, helping to address the dish’s positive nutritional advantages.

Although chilies may cause your tummy to grumble, curry contains other nutrients beneficial to gastrointestinal function. Turmeric, cumin, and coriander are 3 of the most frequent curry spices, and they all offer nutritional advantages.

Indeed, there’s a lot of anti-inflammatory compounds in turmeric. In addition to its antioxidant impacts, cumin also exhibits antibacterial characteristics. When turmeric and cumin work together, they help to calm your tummy and reduce discomfort in your physique.

If you fear that chilies will negate the nutritional advantages, you’re wrong since they don’t. In peppers, a substance known as capsaicin reduces pulse rate and releases endorphins – a chemical that helps to numb the pain. That’s why you feel so delighted after visiting a Thai restaurant.

Also, the medicinal advantages of Thai curries abound with garlic, which is a popular component in Thai dishes. Garlic is one of the most heart-healthy ingredients available. In addition, it improves the immunity’s ability to resist allergens and bacterial diseases.

Peanuts in Panang curry are the only major worry for some people. However, everyone suffering from nut allergies should stay away from this dish.

Where Does Panang Curry Get Its Name?

Penang is a coastal peninsula in Malaysia and the birthplace of the Panang curry dish, which has been around for centuries.

Most people think that the dish originated from the Muslim immigrant community who introduced Indian seasonings. Since Thai people adjusted the dish to their taste, it is usually sweeter than traditional Indian curry.

Is Green Curry Spicier Than the Red One?

Many Thai eateries in the United States feature green curry in their menu, which is gentler than red curry. However, its authentic recipe calls for Bird’s Eye chilies, which are significantly hotter than red peppers. As a result, the traditional green one is the hottest of all.

Which Thai Curry Is The Least Spicy?

The richness of crushed peanuts overrides the intensity of Panang curry, making it the least hot. Conversely, since it does not call for as many peppers as in different dishes, massaman curry may be on a comparable scale.