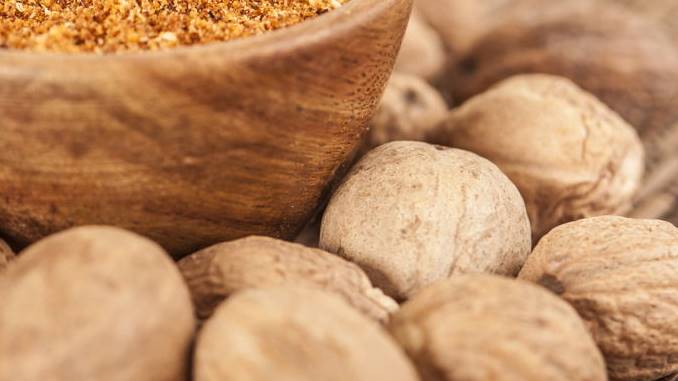 Even those who have detailed familiarity with spices may scratch their heads when asked to distinguish between mace vs nutmeg. It is not surprising given the similar characteristics of these two natural flavorings.

That’s why in this article, we’ll help you have a thorough grasp of these spices’ distinctive features. We’ll also offer exhaustive lists of dishes or herbs that pair well with them, as well as some of their fun facts to broaden your culinary knowledge.

Mace is a popular spice that comes from the nutmeg tree, whose scientific name is Myristica fragrans.

When the nutmeg fruit ripens, it splits into 2 halves, exposing both the seed and the aril, the bright red membrane surrounding the seed. The fruit is then handpicked, and the aril is meticulously extracted.

After that, the aril is left outdoors for up to 2 weeks, which allows it to dry completely and take on different hues, namely yellow, orange, or brown. The dehydrated aril is sold as a flavorful spice under the name “mace.”

Mace is available in two distinct types: whole and ground, both of which have their upsides and downsides.

The former is often called “blades”. As it does not undergo any mechanical process, it still retains the original flavor. Thus, 1 teaspoon of blades is equivalent to 1 tablespoon of ground mace in terms of flavor intensity. However, you have to grind them yourself after buying blades, which can be draining and time-consuming.

On the other hand, ground mace loses some of its flavors in the grinding process. What’s more, this precious spice can even be adultered with other low-quality spices.

That said, it is still superior to ground nutmeg and other ground spices in its ability to maintain the original flavors. Another plus point is that ground mace, as the name suggests, is already processed, which eliminates the need for you to grind it on your own.

Just like mace, nutmeg comes from the aromatic Myristica fragrans, a cultivated dark-leaved evergreen tree. When the nutmeg fruit approaches maturity, it breaks open, revealing the seed and the red covering which encases it.

The seeds are then separated from their outer layer and dried in the sun. During 2 months, the sun’s sweltering heat sucks the moisture out of the seeds, causing them to contract in size.

Dehydrated nutmegs, at this stage, are grayish-brown and egg-shaped. This is when they are ready to be sold and used to deepen the flavors of your food.

Difference Between Mace And Nutmeg

These two spices share certain similar features because they come from the same plant. However, it is not too difficult to tell the difference between mace vs nutmeg.

Can You Substitute Nutmeg For Mace?

Although mace is renowned as the quintessential Indian seasoning, its popularity has declined in recent years. Its scarcity means that it is not as competitively priced or widely distributed as nutmeg. For this reason, it is sensible to use nutmeg as an alternative to mace when it comes to enhancing other ingredients’ flavors.

Bear in mind that nutmeg’s taste is less pronounced, so if you intend to substitute it for mace in a one-for-one ratio, the flavor will be a tad milder. Also, as the flavor profile of nutmeg cannot fully replicate the other, your dish won’t have the distinctive hint of cinnamon that mace has to offer.

The simple remedy for this problem is using nutmeg in conjunction with ground cinnamon since this winning combination is better than the sum of its parts. In other words, their flavor is richer and nearly identical to that of mace. They subtly enhance, instead of overpowering, the taste of other ingredients, resulting in a divine dish.

If you’re feeling extra creative, feel free to incorporate ginger or allspice for unique bursts of flavors. On the contrary, if you’re not a fan of mixing spices, opt for premade pumpkin pie spice blend. Such store-bought blends serve as a decent and hassle-free replacement for mace.

Regarding taste, mace bears a striking resemblance to nutmeg as both spices infuse a pleasantly warm, intense, and woody flavor to your dishes. That said, its sweetness is more robust. Mace’s overall flavor profile is also more sophisticated as it carries a touch of cinnamon and pepper.

What Herbs Work With Mace And Nutmeg?

Also, due to its incredible versatility, nutmeg is a great companion to a wide selection of savory dishes like asparagus, beans, cabbage, eggs, fish, lamb, onion, carrots, pumpkin, potatoes, sausage, seafood chowders, veal, and yams, as well as coffee drinks.

Fun Facts About Mace And Nutmeg

What Is Mace From Nutmeg Used For?

Mace is predominantly utilized to enrich the flavors of baked goods, the most common of which is doughnuts. It is also called for in cakes, muffins, brownies, biscuits, pies, and pastries.

Interestingly, this spice’s applications are not limited to kitchens. Because mace releases an alluring aroma, it is sometimes used in place of synthetic fragrance in colognes, soaps, and cosmetics.