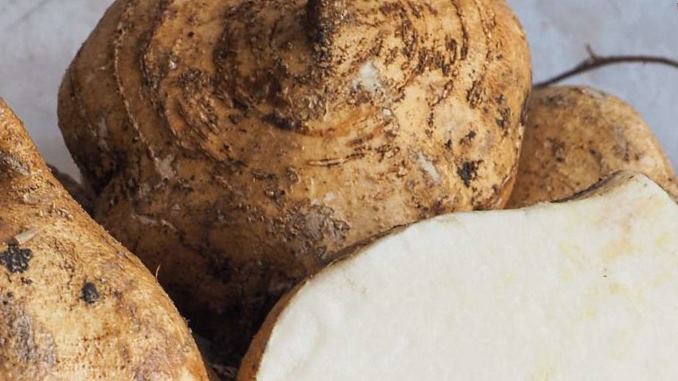 Nowadays, there are still some people who confuse jicama vs potato because of their brown skin appearance. But actually, these two types of root vegetables possess entirely different characteristics, such as shape, nutritional value, and cooking requirements.

In this informative article, we will help you distinguish the two types of tubers above. So make sure you don’t have this confusion next time.

Jicama is a root vegetable related to legumes, appearing to be the oval-shaped and upper weight of 1-5 pounds. Its skin is thick, brown, and flesh is white. The taste is similar to fresh potatoes but crisper and sweeter.

Meanwhile, potatoes come in many different shapes, such as round, oval and long-shaped. A medium one weighs between 5-10 ounces (the size and weight vary on the variety). Also, its skin is thin and can be yellow, white, or even purple.

Potatoes have much more calories than jicama – 77 kcal compared to 38 kcal per 100g – and also more nutritional value, including vitamins and minerals. We have compared several nutrient ratios in 100g of each to make a more accurate assessment:

There are many ways to prepare jicama. You can even eat it raw (after cleaning) without worrying about any harm.

As for potatoes, there are many delicious dishes made from this root, but above all, they cannot be eaten raw. Instead, you can boil, steam, fry, stir-fry, stew, bake as you like to create excellent, nutritious dishes.

No. Typically, the taste of jicama is a sweeter version of a potato. Its flesh is white, crispy, sweet, and succulent, resembling apples and pears. On the other hand, unprocessed potatoes seem tasteless.

How Is Jicama Pronounced?

There are two ways to pronounce jicama /ˈhiːkəmə/: “HEE-ka-ma” or “HICK-a-ma.” It is also known as “yam bean,” which is native to the Mexican peninsula.

What Can I Do With Jicama?

Jicama is usually eaten raw with a salad. However, there are still some other ways to prepare it, such as pickled, stewed,  boiled, stir-fried, steamed, sautéed. A small note is that you should not overcook to keep its crisp, sweet taste.

Although it has many nutrients, the roots, skin, stems, and leaves have toxic properties.

If you’re interested, refer to the delicious recipe below to make shrimp and Jicama Rolls with peanut sauce:

Why Does Jicama Have Wax?

Jicama is usually covered with a layer of paraffin wax to help it keep fresh for about five months and avoid scratches during transportation. When using it for cooking, you must eradicate the outer skin before you can start cooking.

Does Potato Make You Fat?

Not only you, but many people think that potato is one of the foods that can lead to weight gain. However, this viewpoint is not necessarily correct.

Potatoes can make thin people fat, but they can also help fat people lose weight effectively. However, you must use them properly, combined with other foods that harmoniously and appropriately lose weight.