Huaraches and Sopes are Mexican-based dishes that are easy to find in any local restaurant or street food carts.

As street snacks, Sopes and huaraches are enjoyed by Mexicans and South Americans by the crunchy cornbread and full flavor toppings.

Huarache is considered a big version of Sopes as these two dishes are quite the same in terms of appearance and cooking manner.

Nevertheless, if you do further research, you will notice some differences between sope vs huarache. In this article, we will uncover the truths about these two tasty dishes.

Are They Authentic Mexican? 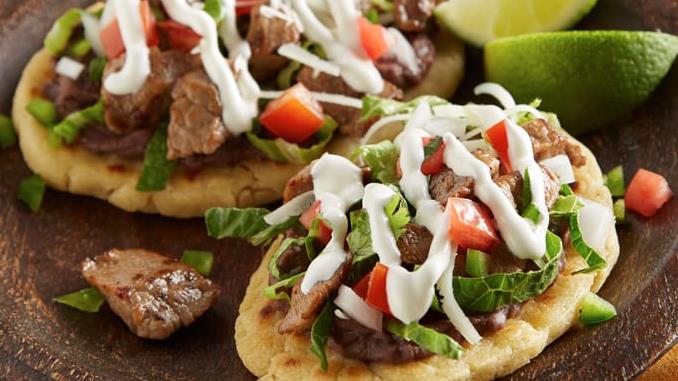 When searching the word “Huaraches,” you will be given shoes as top results. In fact, “Huaraches” are not only shoes but also the name of a Mexican dish. The Huarache recipe originated from Mexico City in 1930. The word “Huarache” is in Spanish, which means sandals. As the dish has a flat oval shape like sandals, it is named “Huaraches.”

After frying the base, you toss it nicely with toppings. Some common options for you include potatoes, onions, pork, chicken, queso fresco, sour cream, rojo, or verde salsa. Huarache is very popular when pairing with a cactus paddle. The cactus huaraches (Huaraches de Nopal con Pollo) is considered as Latino signature.

Huarache can be eaten as a snack or main dish. It contains a rich source of protein. In addition, Masa Harina is 100% gluten-free. Hence, it is edible for vegans. However, to enjoy this recipe, you must use a knife and fork.

Nowadays, huaraches are widely popular in Central and South America, or even some states of the US. In Minneapolis, Chicago, Texas, huarache is seen as an “oblong taco.” The leftovers can be used to make tortillas. 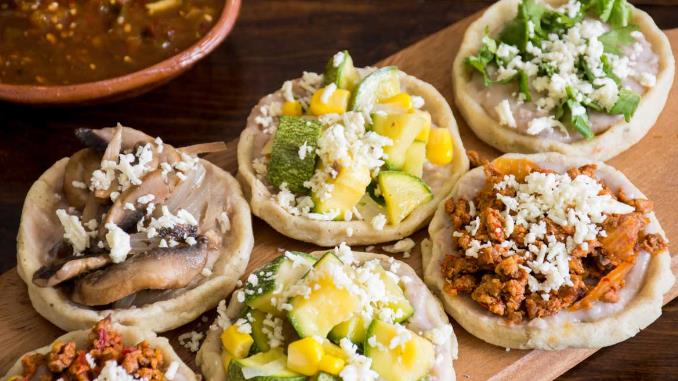 Another tasty appetizer is sope. Two alternative names of this recipe are Pellizcada and Gamacha. In the antojitos group, Sopes results in the most variants, one of which is huarache.

Unlike huaraches, these have smaller and round shapes. People press down to pinch the core in the middle, so it looks like a small dish with a barrier. When referring to the crunchy side of Sopes, it helps to prevent the toppings from falling off.

Usually, these ones are crowned with lettuce, shredded meat, and sour cream on the top. Similar to huaraches, you can drizzle some verde salsa or queso fresco at the end. The signature dishes include Carnitas Sopes, shredded beef, veggie, bean and cheese, seafood.

Sopes vs Huaraches – The Similarities

Either huarache or sope is in the antojitos, which means snacks made of cornflour. Both of them are considered sisters of traditional taco.

As mentioned above, both are made of Masa Harina. The toppings to eat with these two dishes are quite the same. Having some black beans, chicken or beef, diced avocado, tomatoes, lettuce, and sour cream with you, you can have a delicious dish of huarache or sope after a few cooking steps.

The processes of making huarache and sope are similar, which include mixing Masa Harina with water, drizzling some salt, and kneading the dough until the ball forms. Then, flatten the dough and cover with wax paper. Afterward, toast each side of the Sopes/ huaraches for 1 or 2 minutes. After the second frying with butter or olive oil, toss them with toppings. Either huaraches or Sopes are fried only until the exterior is cooked.

Storing method (can they be made ahead?)

You can prepare these two dishes several days before cooking. However, note that these dishes should not be assembled when storing in the fridge. If you want to save huaraches or Sopes for later use, you must separate the components. Huarache and sope can last for 4 days in the fridge and one month in the freezer.

Despite lots of similarities, there are some differences between the two, which will be listed right below to help you distinguish between huarache and sope.

Huaraches have an oblong, flat shape, which looks like a sandal, whereas Sopes are thicker, smaller, and round. In size, huaraches are usually two or three times larger than Sopes.

Because a sope is thicker than a huarache, it is more resistant to humid food. Therefore, if you plan to toss it with salsa or puree (a condensed mixture of blended food), sope is more ideal than huarache.

As mentioned above, the common toppings to go with these two dishes are the same. However, Sopes are less likely to be topped with vegetable toppings, while huaraches are usually paired with cilantro, lettuce, or salad. For those who crawl for something green, mixing vegetables with huaraches is a good idea.

The signature toppings are different. Huarache is famous for matching with cactus paddles, whereas Sope is widely known with Sopes de pollo (Sopes with chicken). For vegetarians, huarache is preferable to sope.

There are two ways to treat the huarache dough. Some people keep it plain when kneading. They do not put anything into the dough. On the other hand, someone prefers wrapping smash black beans with dough before flattening them. Hence, the base will have beans flavor.

For Sopes, no one adds black beans to the dough. The dough for sope is plain. However, you can add eggs to enhance the flavor and the color. When soaking the texture, they need more water than huaraches. Consequently, the base of the sope is soft and pliable. The minority of people soak it with lime.

Serving style of the dishes

Due to the bigger size, Huaraches contain more toppings inside. Huaraches can be considered as either main dishes or snacks. It can be used for Mexican breakfast, lunch, or dinner.

Sopes, on the other hand, are more likely to be a night street snack. As a main dish, huarache is served with side dishes such as Arroz Blanco, refried beans, Ensalada, and guacamoles.

For Sopes, you eat it alone without side dishes. If you want to make it a main dish, you can pair it with Mexican rice, corn, fruit salad, caramel pineapple.

Usually, Sopes can be stored for up to 3 days or even more. However, if it lasts for more than 3 days, the bread will turn too hard. In addition, because it is thick and has a tart shape, Sopes can also be seen as bread. You can quite bake Sopes in the oven. The ideal temperature is 400oF. For huarache, it can last longer.

Huarache and sope share a lot of things in common. The first characteristic that helps you differentiate huarache to sope is the shape. Huarache is normally two or three times bigger than sope. They have an oblong shape, while Sopes are round and pinched in the middle.

Each dish is popular with different toppings. The signature of huaraches is huaraches with cactus pads (Huaraches de Nopal con Pollo). Sopes, on the other hand, are famous when being crowned with shredded chicken.

In comparison, it is difficult to say which one is tastier when comparing the two since your preferences matter the most. Anyway, you can always a huarache or sope with various kinds of toppings to make it delicious as expected. Should you have time, don’t hesitate to try one of them or even both.