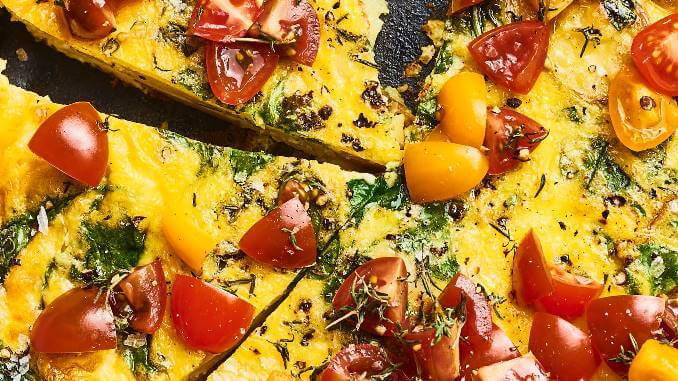 Quiche and frittata are both round, egg-based dishes that you can tailor the add-ins to your preferences. Yet, aren’t they pretty much the same thing? Here are the main distinctions between these two dishes.

Related: Other great Mexican dishes you must try

The main differentiator between these two delightful repasts is the pastry crust. Quiche is a French tart composed of savory custard, cheese, meat, and veggies encased by a buttery, flaky pastry crust. In contrast, frittata does not have a crust, and it somewhat resembles an unfolded omelet.

That said, some people skip the crust in their quiche recipe because they want a lower-carb brunch dish or want to cut down on the hassle. Crustless quiche is way more similar to a frittata, which explains why many people come to mix up between the two dishes. Yet, the presence of the crust is the main distinction that leads to other differences between these egg-based dishes.

Some people assume that frittatas are crustless quiches and attempt to use quiche recipes when making this dish or vice versa. However, the difference in the eggs-to-dairy ratios will only turn their dream brunch dish into a total culinary disaster.

The added stability from the crust enables quiches to accommodate more dairy. Its typical recipe calls for 1 large egg to ½ cup of either milk, heavy cream, or half-and-half. A standard 9-inch quiche requires 3 eggs and 1 ½ cups of dairy.

A frittata is made up mainly of eggs with significantly less dairy. There should be 6 eggs to no more than a quarter cup of dairy, which translates to a dozen eggs to a ½ cup of dairy to fill a 12-inch frying pan. You can use a wide range of dairy products to make it more perfect, including sour cream, yogurt, whole milk, and crème fraîche.

Upon taking a bite of both the two dishes, you can immediately feel the textural differences. Chique, with the high content of the diary, is a luxurious custard.

When your quiche is baked with the correct custard filling or eggs-and-dairy ratio, it’s softer, more wobbly, and silkier than a frittata. Creamy, silky-smooth custard with a tender snap of the flaky crust is what a properly baked quiche promises to deliver.

On the other hand, although a frittata also has a custard-like texture, it’s firmer, light, and fluffy.

Cooking recipes (anything new or different?)

Due to the presence of the crust, these two foods require different cooking tools and methods.

Quiches can be baked either in a tart pan or pie pans for the whole cooking time, whereas frittatas are usually made in a cast-iron skillet, frying pan, or sauté pan.

With frittatas, you’ll need to thoroughly cook add-ins like veggies or meat before adding them into the skillet. Also, beware of wet fillings like mushrooms or zucchini as they can release moisture to the eggs.

Then, pour the egg mixture into the skillet and cook on the stovetop over low heat until the texture is barely set. The last step is to transfer the dish to either a broiler or oven to cook it thoroughly.

Although quiches are still reasonably easy to prepare, they require more effort, especially for the crust-making phase. If you’re pinched for time, a store-bought crust can help you cut the workload by half.

It’s crucial to blind bake the crust (either homemade or store-bought crust) before filling to prevent it from getting soggy while being processed. Once the crust is par-baked, spread the fillings before adding the egg mixture and bake the pie.

As you may suppose, quiches, with more legwork involved, take more time to prepare. Preparation, blind baking the crust, and making the pie will make up a longer cooking time. If you’re planning to make a crust from scratch, consider the time for rolling the dough and getting it cold, which may add about 30 minutes to the total time.

Making a frittata only involves whisking the eggs and pouring the mixture into the skillet. Thus, it won’t take more than 45 minutes to whip up a fluffy, mouth-watering dish.

Due to the longer cooking time and more labor-intensive nature, quiche is regarded as a treat for special occasions.

What Can I Substitute For Cream In My Recipe For Quiches?

If you want to cut down on the calories without compromising the dish’s texture and flavor, we recommend using whole milk to substitute for heavy cream. There are 149 calories and 8 grams of fat in a cup of whole milk, making it a healthier alternative. It sets just as well and still creates the desired rich, creamy flavor.

How Long Should Quiche Rest Before Cutting?

Allow your quiche to cool for around 10 to 20 minutes before serving it. After being taken out of the oven, it’s a bit set and continues to cook with the residual heat inside the pan. Letting it cool helps you have cleaner slices.

Why Is My Frittata Watery?

The proteins in the eggs, at high temperatures, thicken or coagulate. When coagulation occurs, these proteins transform from a liquid state into a solid form, which helps the frittata set. However, when you add too much dairy, there are not enough proteins to set it, resulting in a loose and watery pie.

A frittata has a rich, creamy flavor and a fluffy texture. You can add different ingredients such as meats, bacon, cheese, and veggies for an explosion of flavor. In addition, the absence of flour crust makes it a better option for gluten-free eaters than its quiche cousin.