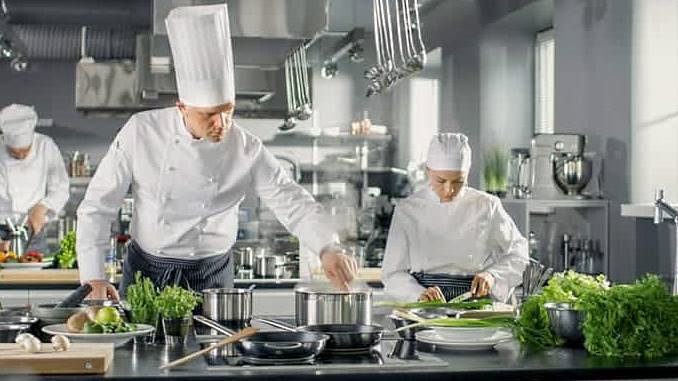 Those who wish to make it in the culinary world are often confused about their vocational pathway.

In particular, these ambitious cooks are unsure about the duties of executive chef vs chef de cuisine vs sous chef vs line cook, as well as how they ensure smooth operation and timely deliveries of orders.

In this article, we’ll specify the required tasks for each position so that you can form a complete picture of the ranks within an eatery’s kitchen.

It is integral that aspiring chefs properly grasp a restaurant kitchen’s organizational structure, including the differences between executive chef vs chef de cuisine vs sous chef vs line cook.

Executive chef is the highest rank in a kitchen’s hierarchy, but it’s also the most misunderstood one because this title only applies to established eateries. In short, an executive chef can be likened to a manager in a firm because he does little hands-on work himself.

Their chief role is managing other cooks as well as the whole kitchen. Contrary to popular belief, their job is not limited to the straightforward task of crafting menus but extends to other burdensome issues such as handling the budget, purchasing ingredients from the most trustworthy sources, supervising, and offering on-the-job training to interns or chefs fresh out of culinary schools.

It goes without saying that to qualify for this role, you need plenty of professional experience, both in cooking and managing.

There is no executive chef in less prominent restaurants, so all functions and staff members are overseen in the presence of a chef de cuisine. Like executive chefs, they are held accountable for keeping culinary costs in check, leading the whole team, and coming up with menus.

Also, their roles vary slightly depending on their preferences. More specifically, some head chefs let subordinates execute their requirements, whereas others gravitate towards involving themselves in cooking activities.

The sous chef remains second in a kitchen’s hierarchy, and more than one person can take on this role in a food establishment.

Their job description is the intersection of cooking and managing—Sous chefs aid head chefs in monitoring junior cooks and preparing some sophisticated dishes themselves.

This role is arguably the most pivotal one in terms of maintaining a kitchen’s efficient operation. This is because they are responsible for the bulk of cooking activities, and the dishes they prepare will be served directly to customers.

This role has been categorized to further enhance the quality of food and leverage the strength of each chef. Specifically, chefs de partie are assigned to a station, which corresponds to the food category they have to cook.

For instance, those working in the meat station have to deal with protein-rich dishes featuring lamb, pork, chicken, or pork. In the meantime, those responsible for the pastry station must prepare muffins, biscuits, pies, or doughnuts.

Role Of An Executive Chef

The role of executive chefs bears a significant resemblance to that of bosses. They make sure that separate functions in their kitchens are well-coordinated and rigorously monitored. For example, they assume responsibilities for:

Who Is A Chef De Cuisine?

If anything goes wrong or spirals out of control, chefs de cuisine need to report immediately to executive chefs.

What Does A Sous Chef Do?

Most of the time, cooking activities are delegated to them by their superiors. But, they might need to sanitize their kitchens, check food stock, or guide newbies once in a while.

Who Are Line Cooks?

Line cooks are at the first rung on the career ladder of chefs, and all they have to do is cook their designated dishes. In addition, these cooks work in separate stations that dictate the food category they have to prepare. This enables them to specialize in what they do best, thus maintaining their optimal productivity.

Why Do Chefs Wear White?

Many beginners can’t wrap their heads around why chefs wear white uniforms while such clothing can easily be stained by food. But white fabric can be re-bleached, thus eliminating dirt or discoloration on their clothing.

More importantly, the white color makes allergens and bacterial cross-contamination risks visible and easy to detect. This lessens the risk of food poisoning.

Finally, unlike dark colors, which trap heat, white is heat reflective, thereby minimizing chefs’ discomfort when working in kitchens for hours on end.

What Type Of Chef Is Gordon Ramsay?

He is 1 of 67 world-class cooks hailed as “master chefs” because they hold multiple Michelin stars (Michelin is a standardized rating system that gauges a restaurant’s quality).

The 16 Michelin stars that Gorgon Ramsay has been presented with over his culinary career signifies that it’s worth traveling a long distance to his gourmet restaurants.

What Is A Female Chef Called?

While some occupations have different words for male and female professionals, this is not the case in the culinary world.” Chef” and “cook” alike are gender-neutral words, denoting both men and women with masterful cooking techniques.