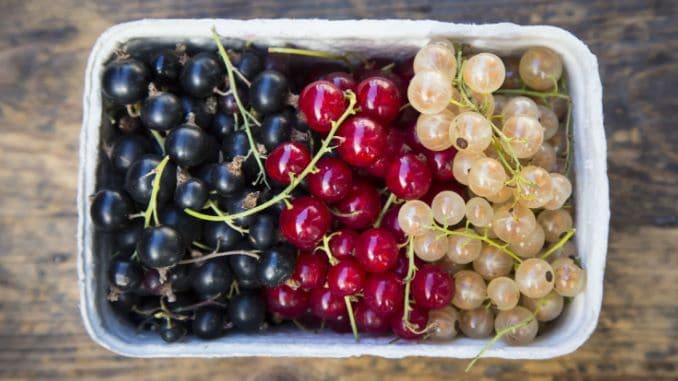 Here are the top 6 best Currant substitutes that you can use today:

Want to learn more about how to actually use these alternatives, as well as their pros & cons?

In case you’re ready to give one of the dishes above a try but don’t have our featured ingredient, don’t worry. There are numerous alternatives to this.

This is the most famous dried version of grapes, specifically from the US’s Thompson Seedless variety or Australia’s Muscat, Lexia, and Waltham Cross.

Initially large, plump and green in color, raisins tend to be bigger and lighter in color compared to currants.

These qualities are also the reason why most people use this in their baked recipes.

Except for the color and size, practically everything is the same between the two.

Both are fruity-sweet with just a hint of tang.

When these are re-hydrated for glazes, both have a treacly consistency.

It wouldn’t be too hard to swap these in recipes.

A relative of raisins, this here is another withered little grape product.

It is also made from US Thompson Seedless but it undergoes a different treatment process.

Sulfur dioxide is added to the vat of grapes resulting in a golden hue and an oil-based solution is mixed to speed up the desiccation.

Instead of three weeks, sultanas are ready in a week or so.

Again, except for the bigger size and golden color, this isn’t that different from currants.

It has the same flavor and consistency even when soaked in water then cooked as a sauce.

It will be lighter, more honey-looking but it will taste the same.

If there aren’t any raisins in your local shop, this is the next best thing.

A staple in Middle Eastern cuisine, this is a bigger, sweeter, more caramelized, and chewier raisin.

Dates are extremely sweet that their treacle-like syrup form is often used as a sugar substitute.

Although there are also several kinds of dates, the most common is also quite dark – almost like molasses when pureed with water.

Compared to other fruits, this isn’t completely dehydrated even if it has a dry, wrinkled exterior.

The interior is soft, creamy, and chewy, making this an interesting snack.

Replace every cup of the required ingredient with half a cup of dates.

If you want to bring down the cloying sweetness it can sometimes have, try adding a tablespoon of citrus.

This natural confection comes from plums. And because there are numerous varieties, ranging from intensely sweet to slightly tangy, expect an assortment of the dried variant.

Because it is such a healthy option, nutritionists and doctors recommend eating prunes to improve bowel movements.

Like raisins and dates, prunes have a dark wrinkled exterior and a soft, mushy inside.

But unlike those two, these are moist, hardly getting dry even when exposed to air.

As aforementioned, its flavor varies depending on what kind of plum it originally is.

Some are just sweet like dates while others have a more complex sweet-sour flavor which is a bit closer to currants.

Generally speaking, it would be half a cup of prunes for every cup of currants.

However, it depends on what kind of prunes you have.

If it’s sweet, that proportion should be enough; but if it’s a bit tart, you might want to add honey or brown sugar to the mix.

If none of those mentioned earlier are available, you could use this.

But you will have to tweak your recipe a bit for savory dishes and quite a lot if you’re making a dessert.

Whether it’s fresh or dehydrated, cherries are tarter than sweet.

Sure, there are ‘snow cherries’, the variety which was rolled in white sugar but you really wouldn’t want that if you’re using this in the kitchen.

Some variants are also bright red. If you don’t mind your pies having this color, go ahead and use this.

But if you’re a bit particular about the appearance of your dish, go for the slightly brown ones which are almost like a Currant.

The real similarity between cherries and our featured ingredient is consistency.

When dry, it’s just like a raisin or a sultana. When boiled and pureed, it has the same gooey texture.

This is also 1:1 but you will have to add a bit of sweetener – sugar, honey, maple syrup, your choice – to the dish to lessen its tartness.

Sour and bitter at the same time, this is one of the most unpalatable berries nature has to offer.

The only way to make this close to delicious is to pack it with sugar.

Overly sweetened that it’s practically like candy, the color, consistency, and flavor of cranberries are almost like cherries.

There is still a slight tartness but the sugar has concealed most of it.

There is no need to add sweetener anymore, especially if you’re using this in aromatic preparations.

No, Actual Blackcurrants Can’t Be Used as a Substitute

And just to reiterate the points mentioned early on, True currants are far from the best substitute for our featured ingredient, even if a few states in the US have allowed its cultivation and processing.

In dry form, this resembles dark raisins a lot.

However, it has a tart and earthy flavor that is just too different from the sweetness of dried Corinth or Zante.

But if you are good with tweaking recipes and you’re up for a challenge, give this a try and maybe it might work with pies and other pastries.

The Confusion with Currants

Some think that dried currants are from blackcurrants or cassis, a dark berry that grows in shrubs and is perennial in temperate regions of Europe and Asia.

Although there are dehydrated versions of the latter and probably named the same way too, the former is actually from small grape varieties called Black Corinth or Zante.

The Corinth (And Zante) Controversy

Blackcurrant (also referred to as True currants) was introduced in the Americas in the 1600s by some of the first English settlers.

The jelly made from this was a favorite match for scones and they probably wanted to make sure they had a steady supply of it in the New World.

However, it was soon found out that it acts as a host for a fungus that killed pine trees.

Because of the real threat to the timber industry, this shrub was banned in the country in 1911.

Around the same time, the Black Corinth grape (from France) and Zante (from Greece) were introduced to the US. Many might have misheard Corinth as currant and continued to call it that.

The US is the only country calling dried Zante or Corinth by that name.

Why You Should Include This in Your Diet

The nutrients you’d find in a fresh one are similar to the desiccated form.

But because these shrink to half or a third of their original size, people tend to eat more.

That’s good though because a serving provides a whole lot of vitamins and minerals, equivalent to a large fraction of the recommended daily intake.

But more than anything, these are filled with antioxidants that greatly decrease damage in the body thereby reducing the risk of different diseases.

Our featured ingredient, on its own, is also packed with the good stuff.

It is loaded with Vitamin B, C, E, and K. Although these are slightly diminished when it undergoes the drying process, other macronutrients, minerals, and fiber.

And one shouldn’t discount the fact that the dried version is found in more recipes – both sweet and savory – than fresh grapes.

Using Currants in Your Dishes

Most home cooks use our featured ingredient in sweet desserts:

But if you are a bit adventurous, you might want to try these as well:

Good luck with your recipes!