It is difficult to ignore the similarities among some Mexican dishes, for example, Chilaquiles and Nachos. These are, however, two different recipes with distinct origins, ingredients, and cooking methods.

If you’re a travel enthusiast, learning about international cuisines helps with not only a more fulfilled experience but also a stronger impression when meeting the locals or other tourists.

Hence, continue reading till the end to know precisely the differences between Chilaquiles and Nachos. 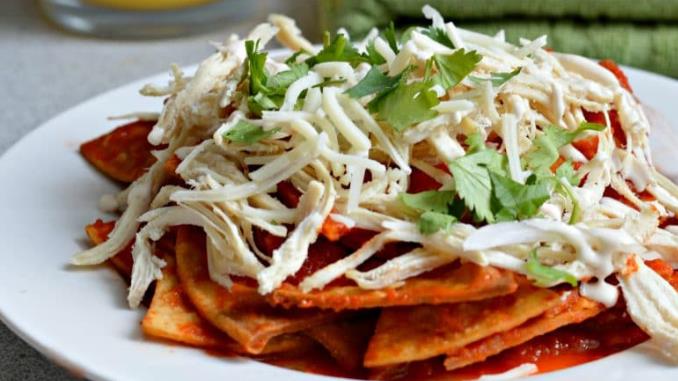 Chilaquiles are a popular Mexican delicacy, which is made with softened fried tortilla strips that have been cooked in red or green salsa or mole. This meal choice is excellent for repurposing leftovers because it can be cooked with stale (or store-bought) tortillas. On the side, refried beans are commonly served.

Using Chilaquiles as a big breakfast or brunch meal has been dubbed a “hangover cure” for individuals who overindulged the night before. It’s commonly served at Tornaboda, a late-night brunch after a long wedding celebration.

Fried or scrambled eggs, cheese, chiles, sour cream, raw onions, cilantro, or chorizo are some of the most common ingredients in Chilaquiles. There are other meats like shredded beef or chicken, with chicken being the most popular.

Many Mexican families, restaurants, motels, and street vendors consider Chilaquiles to be beloved food. As a result, regional differences exist in Mexico.

Tortillas are typically prepared with sour green tomatillo salsa or a spicy tomato sauce in Mexico City. In Central Mexico, crisp tortilla chips are preferred; therefore, instead of cooking them in salsa, the salsa is poured directly onto the chips just before serving.

Chilaquiles are traditionally cooked in cazuelas, a cooking pot until they thicken into a polenta-like consistency in Guadalajara. Chilaquiles in Sinaloa can be made with white sauce rather than red or green. 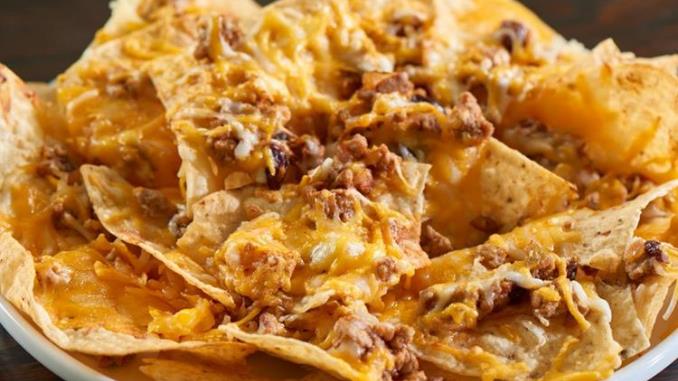 Nachos are defined as “spiced tortilla chips, whether or not topped with melted cheese.” In the 1990s, it was seen as a small bowl of tomato salsa with hot chips as usual, but there is now a more extensive collection of alternatives.

Nachos are unmistakably a Tex-Mex cuisine. It was developed less than a century ago along the US-Mexico border. Chips made from stale tortillas (called totopos) are eaten in Mexico as a side dish with fried beans or as a snack with a few jalapeño peppers and Mexican cheese on the side (never on top).

Origin (Are They Authentic Mexican?)

Nachos have an interesting origin. In the 1940s, a group of Americans knocked on the door of a restaurant just across the border in Mexico after closing time. Because the cook had already gone home, the restaurant owner, Ignacio (nicknamed Nacho), gave his customers totopos with jalapenos and cheese.

Customers excitedly took the meal across the border, where it quickly became popular and was given the Tex-Mex treatment: the cheese was substituted with a cheese sauce for increased shelf life (you can buy jars of the stuff). The requirement for an oven to melt the cheese was no longer necessary, and the fast-food form of Nachos was born. There was no stopping the dish once it began to be offered at American athletic events in the 1970s.

Chilaquiles is derived from the Nahuatl phrase for “chilis and greens.” The Aztecs spoke Nahuatl, a Nahuatl-based language. It is a language that originated in Central Mexico and is still spoken in a few localities today.

Also, according to a centuries-old heritage, Chilaquiles are a popular dish in many Mexican households. They arrived in America in 1898 through Encarnación Pinedo’s “The Spanish Cook.” The simple elegance of authentic Chilaquiles, on the other hand, was not completely appreciated or replicated by this recipe.

To make a serving of Nachos, gather all of these ingredients. Tortilla chips should ideally be produced from remnants of stale tortillas sliced into slices and deep-fried. If you want to be genuine, serve them hot with a couple of bowls of toppings like jalapenos, pico de gallo, and shredded cheese.

The tortilla chips are put on a platter, topped with cheese, then cooked under the grill for this contemporary spin on Nachos. Then decide on your toppings, which may include cheese, tomato salsa, guacamole, olives, sour cream, and virtually anything else you can think of.

Chilaquiles’s base is usually corn tortillas chopped into quarters and gently fried or baked for a lighter variation. First, the crisp tortilla triangles are dipped in green or crimson salsa. Then, the mixture is cooked on low heat until the tortilla begins to soften. In other cases, pulled chicken is added to the mix.

Crema, crumbled queso fresco, chopped onion, and avocado slices are typical garnishes. Chilaquiles can be served with refried beans, scrambled or fried eggs, and guacamole as a side dish.

Chilaquiles are a traditional Mexican dish with a few variations. In this dinner, too, it’s all about mixing flavors. It’s a complete dinner rather than a scramble.

Nachos are best cooked with fresh, essential ingredients. You should cook your Nachos in the oven for the best results, but they may also be done in the microwave if that isn’t an option.

That concludes our guide to identifying the distinctions between Chilaquiles vs Nachos, as well as two tasty Mexican recipes to bring variety to your home meal.

With that in hand, why not plan a big special meal this weekend with your friends and family? I’m sure that you’ll acquire a fantastic experience when it comes to authentic Mexican food.