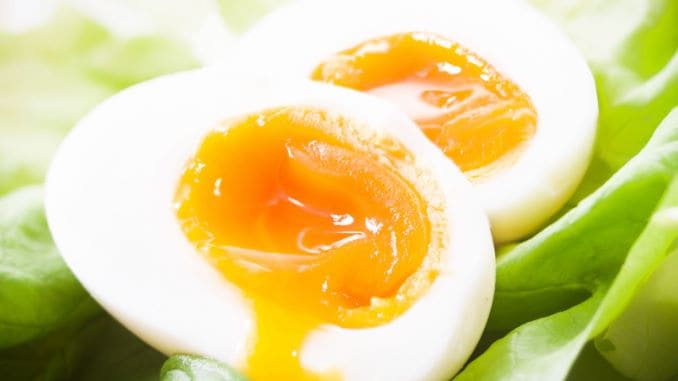 Yes, you can reboil eggs. However, you must do it carefully, or else the quality of the eggs might suffer.

One simple tip is to make sure that the eggs have been refrigerated first and use the stovetop to get the job done.

But in most cases when you’re hungry, and you need something to consume fast, then reboiling eggs quickly might be a good solution.

And there is absolutely nothing wrong with doing this, especially if you have a good reason for doing so.

Here are some of those:

Because You Plan to Re-Heat Them

Let’s say you cooked a dozen or so for a particular recipe, have leftovers the next day, and plan to have that for breakfast or lunch.

You can re-heat those.

• Put some water in a pot. Take that to a stove-top burner and turn the heat on.
The size of the pot and the amount of water will depend on the number of eggs you’ve got.

• If you see water bubbles along the side of the pot, carefully plop your eggs in one by one. Make sure all pieces are submerged in water.

• Remove all the pieces from the water after two minutes.

• Put all in an ice-cold water bath for 30 seconds or so to stop the cooking process and for easy peeling of the shells.

Note that the extra two minutes in hot water will cook the egg more.

If it is soft-boiled, expect that both the white and the yolk will harden a bit.

There’s also that possibility that you will overcook it and get a rubbery white with a thick almost chalky yolk.

If you suspect that the egg is undercooked, you can re-boil it to get the doneness that you want.

Do the same process as re-heating but leave the food longer under the heat, depending on how done you’d like it to be.

For that, make sure to follow the guide to boiling eggs on top.

If you think that it still needs more time to get cooked, go ahead and re-boil it to protect yourself.

Because You Peeled It and Saw It Is Undercooked

If you cracked the shell open and saw that it’s not done the way you want it, you have to re-boil.

The only difference is that this is already opened and you shouldn’t just plop it into hot water immediately like you would with re-heating.

There are certain issues you should take into account since each ‘problem’ will require a different solution.

Here are those considerations:

This means you cooked it to a soft boil.

If you’d like for the yolk to be creamy and not runny, re-boil for two to three minutes.

If you want it hard, leave it in the simmer for five minutes.

This is way undercooked and you will have to put it back in the pot.

Make sure the water is in a rolling boil to cook the outer part of the white immediately.

If the water is tepid or merely simmering, the inside – yolk included – will spill out and ruin the whole thing.

This is pretty difficult because this can’t be re-boiled without a shell.

First, you will have to transfer the egg sans the shell to another container, preferably a bowl.

The next step is a bit difficult because you have three options as to how to proceed: microwaving it, poaching it, or scrambling then frying it.

If you decide to nuke this, simply place the bowl inside the oven and cook for 30 seconds in high.

Check the consistency and cook further if it is not how you like it.

To poach, add a tablespoon of vinegar to a pot of water on a stove.

As soon as it simmers, create a whirlpool in the water with a spoon and carefully drop the egg in the middle.

Once the white forms, ladle the egg out and serve.

The third option may not get you a ‘boiled’ egg but, at the very least, you don’t waste good food.

Simply whisk it in the bowl and pour it into an oiled or buttered pan. You can do a Spanish, French or your style of omelet.

An Egg a Day is Good For You!

• This lowers the risk of stroke, heart disease, and related conditions because it is high in good cholesterol.

• It is an important source of Choline, a nutrient that helps in proper brain function. It is very difficult to find this nutrient and other foods.

• Rich in vitamin A, this is also high in Zeaxanthin and Lutein. These are vital antioxidants that protect against cataracts and similar eye disorders.

• Variants that are high in omega-3 fatty acids lower triglycerides in the blood, reducing blood pressure and risk of heart disease.

• The numerous amino acids that eggs contain have just the right ratio that can help you lose weight, increase muscle mass, and strengthen bones.

Practically a meal on its own, it is one of the easiest foods which you can prepare especially when you’re in a rush.

There are also numerous ways to cook an egg – sunny side, scrambled, and poached, just to name a few.

Add one or two other ingredients – tomatoes, bell peppers, ham, cheese, basil pesto – and you have a brand-new recipe every day.

Or you could just boil it.

Boiling is arguably the easiest way to cook this superfood.

Pop a couple in a pot of boiling water, wait for a few minutes, and you’ve got breakfast (or lunch or dinner) to go.

A Quick Guide to Boiling Eggs

The perfect egg is relative.

All these are achievable, depending on the length of time you leave it in hot water.

If you are determined about getting these results, there are two things you need to remember.

First, place the egg in the pot once the water starts to simmer. That’s also the time you start timing.

Second, after you take them out of the scalding water, put these into an ice water bath – a bowl of water with ice cubes in it.

Aside from stopping the cooking process, this makes the shells easier to peel off.

It’s understandable for people to have so many other uncertainties about re-boiling eggs.

Since the issue has been laid to rest (again, yes, you can do that), let us now answer other queries related to the subject.

Is It Possible to Over-Boil These?

Sure. If you accidentally leave the pot over the stove for more than 15 minutes, you get yourself an ‘overcooked’ egg.

To be honest, this can easily happen when you go for a hard-boiled one and don’t ‘shock’ it with ice water to stop the cooking process.

The whites will be rubbery and the yolk will be chalky.

You may also notice a greenish tint on the yolk, an occurrence caused by the release of hydrogen sulfide.

Some say that this is toxic but no one has died from eating one overcooked egg.

Can I Do It in the Microwave?

As described above, you can re-cook this in a microwave if it’s out of the shell and in another container.

If not, don’t. The interior heat will intensify that it can implode, cracking the shell and spattering the whites and eggs all over your oven.

How Long Until Eggs Spoil?

Raw eggs with the shell still on can last 4-5 weeks in the fridge and 2-3 weeks out of it, while raw whites and yolks last 2-4 days refrigerated.

Hard-boiled ones can still be eaten within a week of cooking, as long as it is kept inside the fridge.

If you are re-boiling it, make sure that you do it before that set weekends.

Can Boiled Eggs Be Cooked Another Way?

Many recipes may call for cooking boiled eggs in certain ways.

One dish requires peeling the shells off then dipping them in a thick batter before frying it in hot oil.

Another takes soft-boiled eggs, sliced in half, sprinkled with herby panko breadcrumbs, and then baked.

As aforementioned, eggs can be cooked in various ways.

That’s why it’s such a great food to have at your disposal.

The same is true even with hard or soft-boiled ones.