Burrito vs wrap has been a big debate over time.

Most people agree that a burrito is a wrap, but a wrap is not necessarily a burrito. Although this conversation can get many fired up, the answer is not yet crystal clear.

In this article, we have compiled general consensus to give you more insights into the similarities and differences between a burrito and wrap. Continue reading to discover the final answers.

Burritos vs Wraps: The Similarities 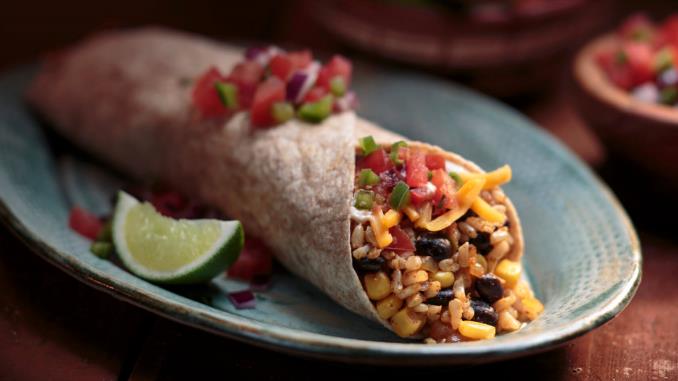 A simple Google search will tell you that a burrito is a tortilla wrapped around savory fillings to form a cylindrical, flavor-packed meal, while a wrap is a flatbread rolled around fillings.

Some more searching will explain that tortilla is a type of flatbread and that most, if not all, wraps use tortillas. Hence, burritos bear a remarkable resemblance to wraps when referring to these ingredients.

How, When, and Where to Eat

Both burritos and wraps enclose a filling and are eaten by hand. They are not too picky on when and where they can be enjoyed. You can have burritos or wraps for breakfast, lunch, dinner, or brunch; at a high-end restaurant, street cart, or vendor at the games—basically, anywhere and any time!

Both burritos and wraps are not difficult to find at all. You can expect to see them in most casual dining outlets and even 24/7 convenience stores. There are also ready-made burrito kits and wrap kits online for you to skip the tedious preparation stage and delve right into cooking.

The Pie’s Ease of Cooking

If for some reason, you cannot find them, cooking is not a big deal. You can whip up a burrito or wrap in under 20 minutes. Burrito recipes and wraps are generally straightforward to follow.

Any basic cookware will work too! You do not have to order an entire grill on Amazon just to make burritos or wraps.

So…They are the same, right? Unfortunately, it is not that easy. The answer is yes—and no.

If you just look at a one-sentence description, burritos and wraps are pretty much the same. But if you examine the nitty-gritty bits, you will find some differences between the two.

Burrito vs. Wrap: The Difference

A burrito is a classic Mexican dish loved for its delicious taste and convenient, messy-free eating experience. It plays a big role in Mexican culinary culture and is a food that is seen on almost every table of Mexican households.

It was not only until around 1930 that burritos made an appearance in the United States. However, since then, it has become comfort food for many Americans.

Later in the 1990s, wraps entered the picture. They are believed to have originated from California as the Western form of burritos. Wraps have grown increasingly popular by marketing themselves as a healthy alternative.

Hence, many passionate advocates for burritos and anti-wrappers claim that wraps are really just burritos repackaged to appeal to a different audience.

The authentic burrito consists of refried beans, a single type of meat, and some vegetables, which vary from region to region. Usually, the meat is shredded or minced beef. Flour tortillas are tightly wrapped around the fillings to form an enclosed cylinder that can be eaten by hand.

Today, there are many variants of burritos because they have been adapted to suit taste preferences, the availability of ingredients, and dietary needs. For example, you can find a lot of veggie and tofu ones for vegetarian eaters.

The abundance in versions of burritos is also a product of capitalism—where businesses continue to churn out “new recipes” to attract customers. Read more on some of the weirdest burritos here: America’s Weirdest, Strangest Burritos (That We’d Probably Eat).

As such, wraps are argued to be one of the “new recipes” that came into being during this process. People mixed and matched fillings to create something that is not refried beans and meat, then get it to enter the market with a new name: wraps.

Wraps are also free to explicitly branch out to other cultures. For instance, there are Thai chicken wraps and Indian spice chickpea wraps.

Wraps, however, fall short on this aspect. Fillings are lightly seasoned with salt and pepper, and there is no single optimal seasoning for all wraps as with burritos. Each wrap has its own seasoning to suit the fillings that are used.

Wraps tend to share similar contents to sandwiches, so you will find them linked to the word “sandwich” in many foodie blogs online. There are tuna wraps, turkey wraps, ham, and cheese wrap, to name a few.

More vegetables are added, and meat is switched for “less-cancer-inducing” proteins, so you will usually hear people say that the main difference between a burrito and wrap is the “healthy” fillings in the latter.

That being said, the perception of wraps being more healthy is also in part instilled by large American brands specializing in Mexican burritos and enlarging the serving portions. In contrast, other brands with wraps make theirs smaller. So, you will feel “too full and sleepy after a burrito, and want to hang out after a wrap.”

Another less noticeable difference lies in the presentation of these two seemingly similar foods. Wraps tend to be open while burritos are closed.

Spot the difference between these two photos? The first is a wrap and the second is a burrito. Wraps are generally open on both sides, whereas burritos are closed on at least one side.

Another difference between a wrap and a burrito is that wraps are often served cold, and burritos are served warm. Due to the “coldness,” many people link wraps to sandwiches.

Although authentic burritos do not include any sauce, many variants of burritos do. There are burritos smothered with savory and spicy sauces, such as salsa, guacamole, pico de gallo, and crema. Hence, you will hear about “wet” burritos. Sometimes, you eat these with a fork and knife to avoid making a mess.

Wraps, on the other hand, are rarely served with wet sauces. There can be melted cheese, but this is sticky, not liquid. So, you will not see anyone enjoying wraps with a fork and knife.

Can you eat burritos on a diet?

Yes, you can eat burritos on a diet as long as you are careful about the ingredients that you choose. Make sure to fill your burrito with lean meats and vegetables instead of processed meats and cheese. This will help keep the calorie and fat content down.

How many calories are in a burrito?

It really depends on the ingredients that are used in the burrito. A typical burrito with rice, beans, and cheese can have around 350-400 calories. If you add meat or other high-calorie ingredients, the calorie count will go up.

Are burritos good for breakfast?

Burritos can be a great breakfast option if you choose the right ingredients. Try filling your burrito with eggs, bacon, and salsa for a hearty and satisfying breakfast.

Can you reheat a burrito?

Burritos can be reheated, but it is important to be careful not to overcook them. Burritos that are overcooked can become dry and rubbery. To reheat a burrito, place it in the microwave and heat it for 30-60 seconds. Be sure to check the temperature before eating to make sure it is not too hot.

You have now reached the end of this burrito vs wrap article. Hopefully, this was helpful enough to help you learn more about the similarities and differences between these two famous dishes.

In short, burritos and wraps are similar in that they use tortillas to enfold fillings, are versatile, easy to find, and hassle-free to cook. However, they have a different origin and reputation. They also differ in terms of fillings and other details on how they are presented and served.

Let us know in the comments if you have any follow-up questions or thoughts. We are always super delighted to hear from our readers.