When it comes to burrito vs fajita, could you tell these 2 famous Mexican dishes apart?

Being new to Mexican cuisine, you might get very confused when first meeting many of the traditional dishes.

All of them somehow look alike, which uses traditional thin and round Mexican cakes to wrap fillings usually consisting of meat (pork, chicken, beef), corn, cheese, sour cream, chili sauce, and so on.

However, there are still a few differences among these dishes. This article will provide some insights and explain how to distinguish burrito from fajita.

Burritos vs Fajitas: Things You Need to Know

Talking about Mexican cuisines, people should think of eye-catching dishes with the typical spicy flavor of peppers. Of those delicious and colorful dishes, burrito and fajita are two great recipes in almost all Mexican restaurants worldwide. They also act as a major contributing factor that promotes Mexico’s culinary culture all over the world.

To tell a burrito from a fajita, pay attention to their appearance and cooking/serving process instead of the flavor. Anyway, it would be better to learn about what burrito and fajita are beforehand. 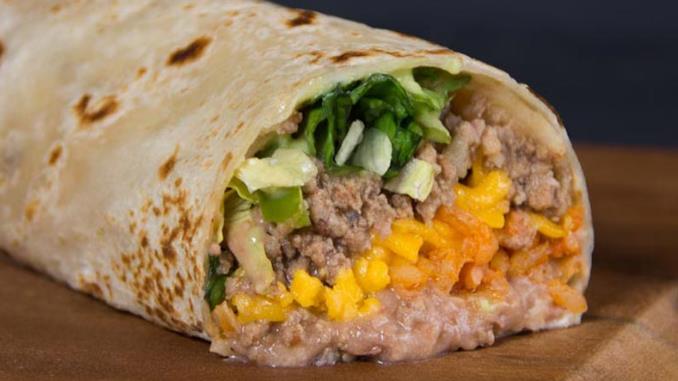 Burrito is a traditional Mexican food made by folding an extra-large-sized round cake into a cylinder with a filling inside it consisting of meat, beans, cheese, and red pepper sauce.

This dish was accidentally created by Mexican people in the first years of the twentieth century when they found ways to keep their food warm during a long journey. To be exact, they used a famous traditional cake in Mexico to wrap a mixture of meat, corn, cheese, beans, then hung them on the back of donkeys to keep food warm.

Typically, a burrito includes two parts: the wrapping cake and the filling.

This kind of cake is the most popular ingredient you can find in all Mexican dishes. That the Mexicans use them in daily meals is the same as that the Asians eat rice every day. There are 2 main cake types: made from corn and made from wheat. To make a traditional burrito, a corn cake is the desired choice.

Meat used in this dish is chicken or beef, or pork., which is chopped, marinated with spices, and stir-fried separately before rolled. Stir-frying in advance is not compulsory because after rolling, people will grill the burrito one more time.

Beans – a familiar staple food – have been grown widely in Mexico for a long time. In a burrito, it is necessary to stew beans until they get a mushy texture in advance.

After preparing the perfect filling, the next step is putting all the above ingredients (meat, bean, cheese) into an extra-large-sized cake, then sprinkle with red pepper sauce (usually made of poblano peppers). Lastly, roll the cake carefully into a cylinder and grill it in an oven.

Nowadays, people have come up with some modern versions of burritos by replacing or putting more things into the filling, such as rice, vegetables, corn, guacamole, sour cream, or anything they fancy. 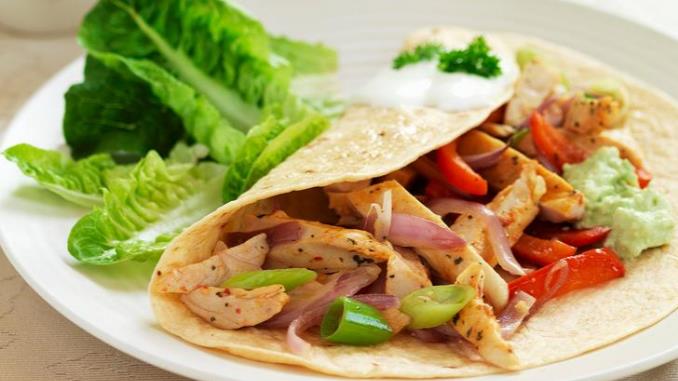 Fajita is another traditional Mexican dish of meat and vegetables cut into strips, cooked, and wrapped inside a corn or wheat cake.

The first version of the fajita was created by Mexican workers living in West Texas in the late 1930s and early 1940s. At the time, fajita only consisted of skirt steak (the parts underneath the cow’s heart and lungs) served with the wrapping cakes.

Skirt steak is quite tough to cook, but Mexican workers found a way to make them tender and edible. They cut skirt steaks into thin strips, marinated with spices, grilled the meat, then ate them with the cakes.

Until the early years of the 1960s, this dish became a popular street food in Mexico and West Texas. Then, people began to put more stuff in fajitas such as vegetables, tomatoes, salsa, guacamole, onions, etc., and replace skirt steak with some other meat like chicken, pork, or other portions of beef.

In short, a burrito and a fajita do resemble each other in some terms, from the crust to the filling of meat, bean, cheese, red pepper sauce, and the typical spicy taste of Mexican food.

Extra-large-sized cakes (wheat or corn) are used to rolling the filling into a cylindrical shape in burritos. Meanwhile, medium to small-sized ones are preferred to use in fajitas.

Burritos are always served in big cylindrical rolls fully loaded with the filling inside after being grilled. To enjoy a burrito that is too big to eat by hand, it is essential to use a knife and fork to cut it into small pieces to enjoy.

On the other hand, fajitas are usually served with wrapping cakes and fillings separately so that each person can choose their favorite ingredients. Typically, when serving fajitas, the waiters will show a list of toppings for customers to opt for which they fancy most.

Besides, due to their medium to small-sized pieces, fajitas can be enjoyed by hand. This is why fajitas are more well-known as street food than as luxurious dishes in restaurants.

Burritos taste juicier than fajitas. The juiciness of burritos comes from its cooking process: People sprinkle sauce and gravy directly into the fillings, and cheese melts while being grilled.

All in all, there are only a few differences between the two dishes, and both are yummy easy-to-cook recipes.

Can I make them at home?

Making burritos and fajitas at home is easy, especially when you can quickly find all the necessary ingredients in every grocery store or supermarket. For the wrapping thing, you can even make it yourself.

If you are still not confident in your cooking skills, try to make a burrito with chicken first by following some straightforward recipes instructed in these videos:

Which is more delicious between burrito and fajita?

Nothing is better or worse. It depends on each person’s taste and how you want to enjoy them. Owing to its versatility, you can choose any of your favorite toppings to wrap. Hence, there is nearly nothing to discuss when referring to their flavor differences.

Yes, you bet! It’s one of my favorites as well.

How about tacos? Is taco popular, too?

Are meat and tortilla must-haves for serving these dishes?

Most of the time, yes.

Is a burrito just a fajita with rice?

While burritos and fajitas do have some similarities, there are distinct differences between the two as well.

Is burrito mix a Tex-Mex thing?

Do all burritos have rice?

Not all burritos include rice, but it’s a common add-in.

Some burritos instead have refried beans, which can be just as delicious. Whether or not a burrito includes rice usually depends on the chef or restaurant, so you may find some that include rice and some that don’t.

But it’s definitely a possibility that a burrito will have rice inside of it.

What’s bigger than a burrito?

A burrito is typically considered to be a large, Tex-Mex style sandwich.

However, there are larger versions of this dish called burrito bowls, which are basically just burritos without the tortilla. If you’re looking for a really big Mexican-inspired meal, then you might want to try a burrito bowl.

Can you use fajita seasoning for burritos?

Fajita seasoning can definitely be used for burritos, but it’s not the only option.

Burrito seasoning mixes usually include chili powder, cumin, and garlic powder, among other spices. So if you have some fajita seasoning on hand, you can definitely use it for your burrito.

But if you don’t, there are plenty of other seasoning mixes that will work just as well.

Where did burritos and fajitas come from?

Burritos and fajitas both have pretty long and complicated histories, but they both originated in Mexico. Burritos got their start in the early 1800s as a simple dish of beans and rice wrapped in a tortilla.

Fajitas, on the other hand, first appeared in the early 1900s as a variation of skirt steak.

So while they both originated in Mexico, their histories have since diverged and each dish has developed its own unique set of traditions.

Burrito and fajita are two must-to-try dishes when you come to Mexican cuisine.

Though there are many similarities between these two traditional Mexican dishes, I hope you have obtained helpful information through this article to differentiate burrito from fajita.

One more time, thank you so much for reading our guide and tips. If you find this article helpful, don’t hesitate to share it with relatives and friends.

And it would be great if you leave some comments with pictures of burritos and fajitas that you have tasted or made at home by yourself.