Mexico is the country of famous recipes and dishes that win the hearts of millions all over the world.

Among them, Burrito and Enchilada are the most prominent. However, foreign tourists usually find it hard to differentiate these two dishes due to their similarities.

Sometimes, people even think that burrito and enchilada are the same but have two different names. So, in this article, let’s dig deeper into the details to compare burrito vs enchilada and discover their differences. 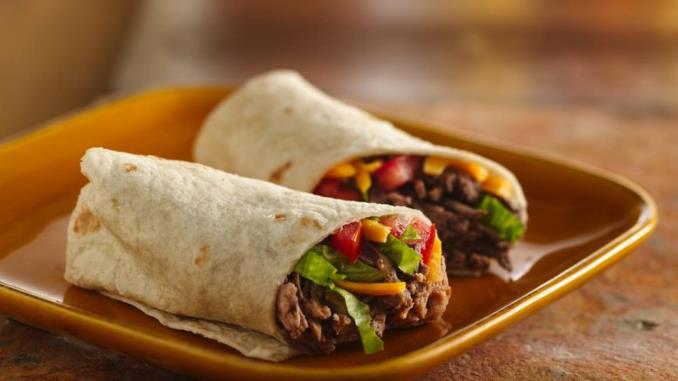 Burrito is a traditional Mexican consisting of two main parts: the crust, and the filling.

As for the crust, the Burrito is usually made with flour by chefs. After mixing the dough and baking, the cake will have a certain flexibility and self-adhesive to keep its characteristic shape after wrapping.

Meanwhile, the cake filling is the perfect combination of many different ingredients to ensure a full supply of nutrients.

Traditional Mexican burritos are usually filled with meat and roasted beans. Over time, the burrito has become a popular dish in many countries around the world, leading to various burrito versions that suit the culinary culture of each region.

As you know, its special flavor is created by the soft crust and rich filling that brings a new experience and a sense of enjoyment to the eater. Also, because everything is rolled in a crust, the burrito is regarded as a convenient and nutritious snack.

Although burrito is now served as fast food, it is also available in luxurious restaurants worldwide, thanks to its being a sufficient source of nutrients. If that’s the case, restaurants often wrap a layer of foil on the outside to keep the cake hot for longer. Not only does foil help to retain heat but it is also more hygienic to enjoy the food.

Basically, an enchilada is an extended version of a burrito. However, while the burrito crust is made with wheat flour, the main ingredient of enchiladas is cornmeal, which makes enchiladas feel lighter and healthier.

Another obvious difference between enchiladas and burritos is the sauce covering its surface. Specifically, enchilada sauce is made from many different ingredients such as tomatoes, minced meat, cheese, and herbs leaves, which does not apply to burritos.

Despite their similar content, enchilada is a more luxurious dish than a burrito.  In particular, it is embellished with sauce and tends to be served on the spot. You should, of course, use utensils such as knives, forks, or spoons to enjoy it to the fullest.

Burrito appeared long after Enchilada. Around 1910 – 1921, the first burritos were made by a street food vendor who just wanted to find a way to preserve hot food longer.

Gradually, this dish became popular and loved by many people. For your information, Burrito comes from the Spanish word for “little donkey” because the shape of the cake resembles the animal.

Enchilada was born about 100 years before Burrito. Appearing from the Aztec times, the Enchilada had a fairly simple filling, just small fish wrapped in cornbread. This dish appeared in the first Mexican cookbook of the 19th century, published in 1831.

Burrito dishes are formed from 2 main ingredients: The crust and the filling. In which, the burrito shell is made from flour, water, and salted egg. Some regions may have other variations when making pie crust by substituting ingredients for butter or milk.

Meanwhile, the filling of burritos is made from chicken, beef, pork, vegetables, corn, and seafood. Of course, if you want more starch, consider adding some rice to your cake.

In some cases, if you are allergic to seafood, or want to change the ingredients, ask the cook to reduce it according to your preferences. In addition, there are also vegan burritos whose filling is now completely replaced by vegetables.

Based on your desired burrito size, you should calculate the number of servings to choose the right amount of ingredients. This can help you avoid a shortage or excess filling during the making process.

Enchiladas contain the same ingredients as a burrito, such as crust, vegetables, and meat. But, it is covered in a special sauce – which burritos don’t originally have.

When it comes to the filling, you can freely choose and substitute ingredients according to your preferences, just like in burritos. As mentioned before, the cornstarch crust helps to soften the cake and increase the moisture, making it easier to absorb the sauce.

At first, enchiladas were regarded as “chili burritos” due to their special sauce flavor. However, it has been greatly improved to cater to more people’s taste

Nowadays, the main ingredients used to make enchilada sauce are tomatoes, cheese, minced meat, onion beans, and a few others, which are customizable anyways. This results in a whole host of enchilada versions in the modern days.

Remember that you always need to prepare the ingredients to make burrito crust and filling first. If you don’t have enough time and effort, finding premade burrito shells in supermarkets or bakeries is a great idea.

If you still find it complicated, follow the chef’s instructions in the video below:

Hope that after reading the last article, you have managed to distinguish the basic differences between burrito vs enchilada.

Don’t be afraid to try making a burrito or enchilada at home by following our guides above. By doing this, you will surely understand the gist of these 2 dishes better.