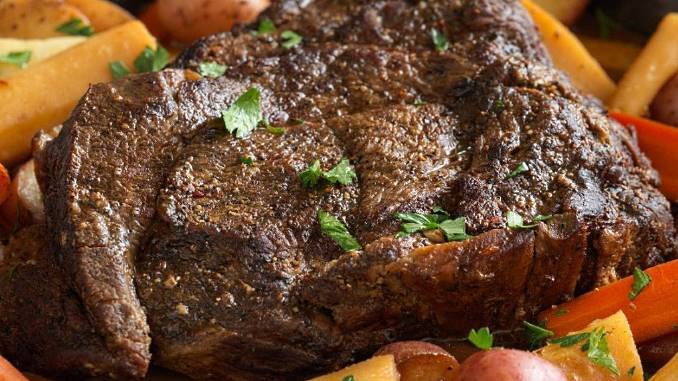 Roasting has always been a popular cooking method used to intensify beef’s flavor.

Yet, among many parts of the beef, arm roast and chuck roast are the two that confuse people the most.

Though they appear pretty similar, there are several critical differences between these two that you should be aware of to make an informed decision.

Related: Here are the most popular meat types you can eat today

What Is Chuck Roast Cut?

If you want to detect where this cut, also called chuck blade roast, comes from, look at the area between the cow’s shoulder and neck. It is located between these two body parts, right beside the rib and above the brisket.

Since the cow’s front legs get involved in many activities, this portion is frequently trained, thus becoming a muscular area. Also, it contains a considerable amount of connective tissues. Therefore, chuck meat tends to be tougher than other types of beef.

This texture eventually makes it less appealing and more affordable. Nevertheless, if you cook it appropriately, for example, using them in pot roast, beef stew, it becomes amazingly flavorful.

Besides, as this roast has a considerable deal of marbling, professional chefs also recommend grinding it to make some patties for hamburgers or other dishes that use ground meat.

What Is An Arm Roast?

An arm roast, usually called arm chuck roast or chuck primal, has been well recognized for its nice beef flavor. The butcher principally takes this arm chuck out from the calf’s shoulder. As a cow utilizes the muscle in this area pretty often, this cut appears to be incredibly moist and tender.

To identify this at the butcher’s shop, you can have a look at its prominent round bone as well as the average ratio of fat. Because of its tenderness and moisture, this type of meat is ideally used for braising, slow-cooking, and grilling.

Moreover, even when you don’t have much time for these cooking techniques, you can try roasting arm chuck meat in the oven, then cut it into thin slices to enjoy.

It is widely considered an economical cut. Although it is not pricy as other parts of the beef, it is worth the investment. You can make a lot of tasty and beefy dishes using it.

Though both of them are beef, they are derived from different parts of the cow. While the former is taken from the meat between the cow’s neck and shoulder, the latter can only be found in the shoulder area.

Apparently, these two parts differ in their fat ratio. Arm chuck roast is regarded as low-fat content. Hence, it cannot be used to make hamburgers. On the contrary, its corresponding type of meat, chuck roast, is a recommended and typical ingredient for ground meat.

Whereas both are tender and typically used for slow-cooking dishes, their tenderness varies.

As a cut from the cow’s shoulder, the arm roast is incredibly tender, especially after cooking. Yet, the chuck roast comes from another portion. Hence, even when cooked, it cannot reach the level of tenderness that arm roast can.

The American Foods Group reports that 100g of arm roast usually provides you with 180 calories for the day, while chuck roast is said to have around 220 to 280 calories. This difference is rational because the latter contains a more significant deal of fat.

As can be seen, these two are both suitable for slow cooking methods. Hence, you can use both in dishes such as pot roasts and beef stew. Simmering these two types of meat in sauces is the perfect way to make them juicier. Also, the longer time you cook them in these sauces, the tender and tastier they become.

What’s more, it is advised that you control the temperature carefully. If it reaches higher than necessary, the heat will promptly dry off all the liquids, causing your meat to lose its juices. Besides, no matter which part of the beef you utilize, you should read and follow the recipes as it is not easy to cook beef perfectly.

Though the above-mentioned tips apply to both, there is a tiny difference between cooking these two types of meat.

If you deal with chuck roast, remember it is not as tender as the arm chuck one. Consequently, you should spend more time roasting or simmering it so that you can have a mind-blowing flavorful meal.

Can You Cook An Arm Roast On The Grill?

Since one of the recommended cooking methods for this type of meat is grilling, you can cook it on the grill. First, season it with olive oil, pepper, onion powder, rosemary, and garlic powder. Then, grill it until the roast becomes medium-rare. You may also want to add some vegetables together with the meat to have a healthily balanced meal.

Can You Smoke Arm Roast?

Of course. You can smoke it for about 4 to 5 hours under the heat range of 200 to 220°F. Yet, it is recommended that you use a chuck roast instead since its fat makes the smoked beef even more appealing.

Any lean cut of beef can be utilized to produce jerky. Thus, many people get confused about whether a chuck roast is suitable for making jerked meat. For sure, it is. However, you need to make some more effort to trim all the fat from this meat portion.

Apparently, this may not be the best choice for making jerky. Cutting off all the fat from the roast is pretty time-consuming. Furthermore, the high-fat content prevents the jerky from staying fresh for an extended period of time.

Hence, to create the best jerky, you can refer to beef round, sirloin, or flank steak instead.