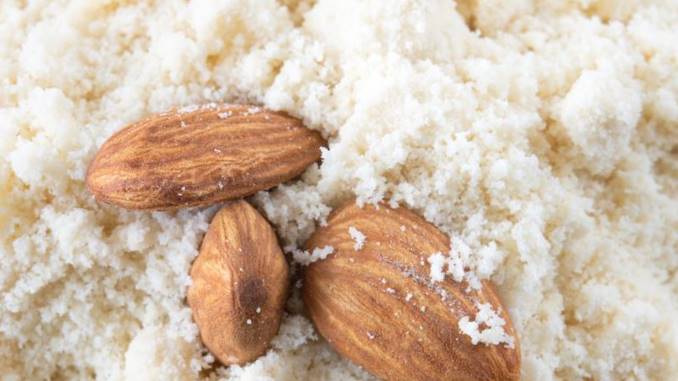 Many people, nowadays, still believe almond flour and wheat flour are the same white powder. However, it’s not true. If you’ve got a chance to look into each of them, you’ll notice some interesting differences between the two.

If you want to know all the details regarding these 2 kinds of powder, keep on reading. We’ve got a lot more to serve.

What Is Almond Flour?

As the name already implied, grounded almonds are what people use to make almond flour. To eliminate the shells from almonds, scald them in boiling water, and after that, crush and filter them into a fine powder.

Although many people equate almond flour and almond meal, it’s important to note that they are not equal terms.

When making almond meals, the almonds undergo the grounding process with their shells preserved to produce more refined powder, creating a significant distinction in texture. When it comes to recipes, the texture is a significant deal.

This type of powder contains relatively low carbs and provides a relatively mild sweet flavor when coupled with all nutrients. Additionally, this type is rich in vitamin E and magnesium, which are beneficial for the body.

Compared to wheat ones, there is a massive difference between almond and white flour in how the dough will behave in the kitchen. Therefore, it’s crucial to incorporate more ingredients like egg whites to assist moisture absorption.

Utilize this starch to bake pastries and desserts. You may also mix some herbs and seasonings and then utilize the mixture to produce a crispy coating for poultry, seafood, or veggies.

What Is All-Purpose Flour?

All-purpose flour, commonly referred to as white flour, undergoes a shell separating procedure in which the wheat grains’ brown skin gets removed before people grind them into fine powder. A fun fact is that this one could be both from hard and soft grain varieties.

Nowadays, this type could be the bleached ones, which give a more delicate finish, or unbleached ones, which lend an extra mouthfeel to what is cooked. However, no matter what kind it is, this powder is versatile. It can nail almost everything from toast to pie crust to sweets and pastries.

It includes 12 – 14% proteins in its composition, which helps to fortify and form the batter. At the same time, it also features a considerable degree of gluten coupled with yeast. Thus, it is very controversial that whether or not this kind is nutritious.

There tends to be a nutritional reduction when using this type for baking cakes, as the white starch portions of the wheat grain are its main ingredient. Thus, take extra caution to keep it in a chilly, shaded environment where it can breathe. Excellent ventilation also helps a lot as dampness might attract pests or cause the whole bag of powder to spoil.

Also, if you choose this option to make a dessert, keep in mind that the dough will not be as delicate or soft as pastries prepared with baking flour. However, loaf baked with this is much lighter.

Can I Substitute Almond Flour For White Flour?

Yes, it may act as a splendid substitution in biscuits, desserts, toast, and waffles.

Indeed, you might practically use them in pastry at a 1:1 proportion. Yet, baked delicacies produced with it are likely to get flatter and thicker due to the absence of gluten.

Can You Taste The Difference Between The Two?

Yes, you can. Almond powder usually possesses a nutty flavor that compliments most bakery products and desserts, while regular powder’s flavor is more of a moderate and balanced side.

That also explains why we can use regular flour in nearly every dish without changing the flavor. So, even if you enjoy that nutty flavor (and presumably aren’t sensitive to gluten), you may credit the former for adaptability.

At the same time, there is also a slight sweetness to almond flour, but it is not significant to drastically impact savory dishes. It also provides considerable richness.

Yes. Frankly, despite its minor downsides, it’s one of the most healthy flour kinds out there, if not the most already.

It has fewer carbohydrates than white ones but more fat. Sadly, this implies that it carries more calories. It compensates for this, however, by being extra healthy and nutritious.

Every ounce contains a significant dose of vitamin E, manganese, magnesium, and fiber.

With its fat, fiber, plus exceptionally rich magnesium content, it appears remarkable in its ability to regulate blood glucose levels and enhance insulin performance.

On the other hand, wheat flour is one of the causes of hypoglycemia as it raises blood glucose rates, making you feel sleepy throughout the day. In such cases, an almond powder breakfast bagel may make you less prone to drift off to sleep during school.

Wheat flour also features a greater concentration of phytic acid, an antinutrient-nutrient, which results in a worse uptake of micronutrients from eating. In addition, your intestines can’t collect elements like calcium and magnesium if it accompanies them.

While almonds include a significant phytic acid accumulation in their shell, their powder doesn’t contain such a substance since people have already removed the shells during the blanching procedure.

Moreover, unlike wheat flour, the type from almond contains no gluten, making it an excellent alternative for gluten sensitivity or wheat allergy.

Why Does Almond Flour Not Rise?

The reason lies in its gluten-free characteristic, which turns it into a renowned option for cooking gluten-free dishes, desserts, and pastries.

However, since these pastries don’t have gluten, they do not rise as strongly as wheat flour ones. But you can make up for that by adding whipped egg whites to lend a bit lift.

Why Is Almond Flour So Expensive?

The answer is simple: Because its main ingredient is only almonds. And raw almonds are expensive, which means the price tag can not be cheap.

Can You Mix Almond Flour With Whole Wheat Flour?

It’s OK to replace or even combine these two. Indeed, you could use these two interchangeably to bake desserts, pies, pastries, loaves, and cakes with nearly no taste changes.