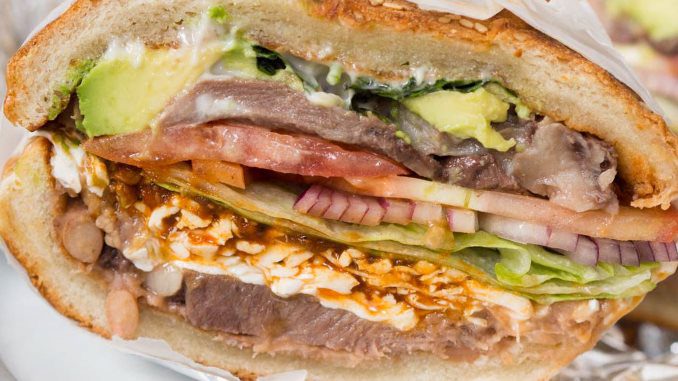 Torta and Cemita are seemingly the eternal appeals for anyone who craves Mexican sandwiches. With the complex layering of different textures and flavors, these two versatile and take-out friendly dishes have surely earned a significant place in the Mexican sandwich category over the years.

However, although they resemble the shape of a sandwich, they differ in some aspects, including origins, the use of bread, and ingredients.

Keep reading; this article will clarify the distinguished differences between these two dishes so that you don’t have to be baffled when choosing your hearty dish.

Related: Top 30 Mexican dishes that are popular around the world

What Are Torta And Cemita?

A torta is a traditional Mexican sandwich filled with meat, sauce, and a wide range of toppings such as avocado, onion, lettuce, tomato. It has a similar taste to a taco, but its fillings add a whole new level for anyone who desires to experience a refreshing Mexican flavor.

On the other hand, cemita is a kind of torta, also known as a Puebla’s version of a torta sandwich. It is a round, crusty bread roll consisting of a fresh, sesame seed, cutlets of meat, and various toppings. Some typical toppings are avocado slices, tomatoes, chipotle peppers, and papalo herb.

Although these two famous Mexican sandwiches are all champions of versatility and satisfaction, they have some differences that constitute their uniqueness.

How Do Torta Differ From Cemita?

Overall, there are 3 main factors to tell torta vs cemita apart.

The torta has a pretty confusing history with many variations. Some reported it was rooted during the French intervention in Mexico in the 1860s. At that time, some Mexican bakers took inspiration from the French baguette and created smaller loaves called bolillo and telera. Various toppings then to be added to take the distinct flavors further.

The exact arrival of the torta is still a myth, but by the mid-twentieth century, it had firmly crept into Mexican culture and became an indispensable part until now.

Meanwhile, cemita’s origin is somewhat more apparent. Noteworthy, it originated from Puebla in Mexico. It is also known as cemita poblana, which refers to its city and region of Puebla. Hence, it is warmly welcomed by its hometown of Puebla due to its unique regional flavor.

The most noticeable feature that differentiates torta from cemita is the bread.

The former is very versatile in bread options depending on the region; however, bolillo and telera are the two most go-to choices.

Bolillo is a crusty bun with a soft interior. It is similar to a shorter baguette with an oval shape. Meanwhile, telera is slightly larger, flattened, round-shaped with two cuts into three parts. It is commonly soft outside and denser in its inner part.

On the other hand, cemita makes use of a slightly sweet, sesame seed bun. Like a French brioche bun, cemita is tender yet has enough texture to hold up any of your favorite fillings.

Although torta and cemita utilize almost similar ingredients such as peppers, sliced avocado, tomato, onion, shredded cheese, mayonnaise, they hold different tastes due to a range of fantastic meats and toppings.

Torta tends to have more freedom when it comes to ingredients due to its several variations. In essence, it is often prepared with refried beans, pickled jalapeños, creamy avocado, and onion.

In addition, it offers an infinite variety of meats including roast beef, ham, turkey, beef Milanese (breaded meat fillet), or chicken. Additionally, other Western versions of torta can vary from smoked salmon to ham to satisfy any food lovers.

It is noteworthy that although any fillings of torta can be used for cemita, the significant differences between these two dishes are chipotle peppers and the papalo herb. Chipotle peppers refer to dried, smoked red jalapeños peppers, which offer a smoky, sweet, and spicy flavor.

Besides, papalo is a unique herb in Mexico with a vibrant and robust taste. Hence, the combination of these ingredients contributes to a fantastic regional cemita.

How Many Types Of Torta?

What Are The Different Meanings Of Torta?

It comes as a surprise that the word “torta” can imply different meanings across many regions, in both Latin America and overseas.

Specifically, the term does not only refer to a Mexican sandwich, but it can also be used to describe cakes, pies, or flatbreads. Furthermore, in Spain or the Philippines, torta even denotes an egg fritter or omelet.

Can You Easily Find These In a Major City in Mexico?

How Many Calories Does A Cemita Contain?

Depending on the fillings, the nutrition facts can vary. Simply say, each cemita contains up to 900 calories, 37 grams of fat, 11 grams of saturated fat, and 65 grams of protein. It simply means that you’ll need 2 hours of cycling or 1.4 hours of running to burn off all these calories.