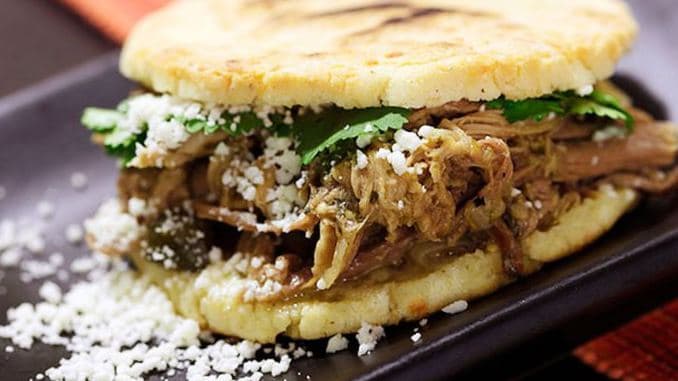 Many people are fans of food but have never heard of sopes vs arepas. They see no difference between them even when they tried these two dishes once.

Then, this article will provide beneficial information so that you can have an in-depth outlook of these delicious street foods.

Sopes – one of many famous traditional Mexican dishes – originated in Mexico’s central and southern parts. People also called this food picadita, but not commonly.

On the other hand, arepas are flatbread typically found in the South American regions of Venezuela and Colombia. They are pretty similar to the Mexican pupusa and gordita.

Still, many eaters have mistaken them. Hence, please keep reading to explore their differences.

Like gorditas, tamales, and tortillas, the dough, called masa – a mixture of water and nixtamalized cornflour is a must to make sopes.

Meanwhile, the dough of arepas is different. You will need special corn flour to cook one successfully. This type of flour differs from masa harina – used to make sopes, tortillas, and gorditas. For your information, arepa corn flour is not soaked in limewater or nixtamalized. Therefore, it would be best if you cooked and then dried it before use.

Besides, the dough base of the sopes is not too thick (but thicker than tortillas) and has the sides pinched to create a ridge. In contrast, the dough cake of arepas is extra thick and has a round shape.

Overall, these two dishes can come with varieties of topping combinations. Hence, how the food tastes depends on what fillings and seasonings you add to it.

However, the ways you put toppings into sopes and arepas are different. While you add fillings over the top of the sopes base, you need to stuff toppings into the heart of arepa cakes. After that, its overall appearance will resemble a sandwich.

You need to fry sopes to perfection over medium-high heat for 2 minutes on each side. Don’t overheat the food, or else it gets burnt. As a sope develops lightly brown and crisp, you can transfer it to a paper towel to drain excess oil.

On the other hand, you need to seal the arepas on a hot, oil-brushed pan for about four minutes on each side. Then, bake them in the oven for 18-20 minutes until the food has puffed slightly and sounds hollow when tapped. Allow them to cool down for ten minutes before slicing and stuffing.

How Do You Make Sopes From Scratch?

You don’t have to feel nervous about the cooking procedure, and it is super easy to make sopes from scratch! After a few times of practice, you will get used to the process.

A plain arepa is not harmless to your health. But when stuffed with toppings, you might have to consider its impacts on your body weight.

A serving of one plain arepa takes up 150 calories of your daily diet. Meanwhile, the traditional version stuffed with cheese introduces an immense amount of calories – 270. In addition, both plain and stuffed arepas contain two-gram saturated fat – an unhealthy fat type that commonly contributes to heart diseases.

Moreover, the plain arepas provide five percent vitamin C of the daily recommended intake. You can also take in a good source of vitamin A – three percent required each day.

With 19-gram carbohydrates and five-gram protein offered by one plain arepa, you can have it as a pre-workout snack.

How To Reheat Frozen Arepas?

To reheat frozen arepas in an oven, preheat your oven to 375 degrees Fahrenheit first. Then, you place them on a baking tray to bake for about 15 minutes, or until their outer layer is crispy and turns golden brown and the cheese has melted.

For a pan-fried or grilled preparation, bring a skillet or grill to medium heat. Afterward, you cook the frozen arepas for five to eight minutes. Next, flip each one and cook for another five to eight minutes, until the cheese has melted and the arepa is crispy and golden brown on both sides.