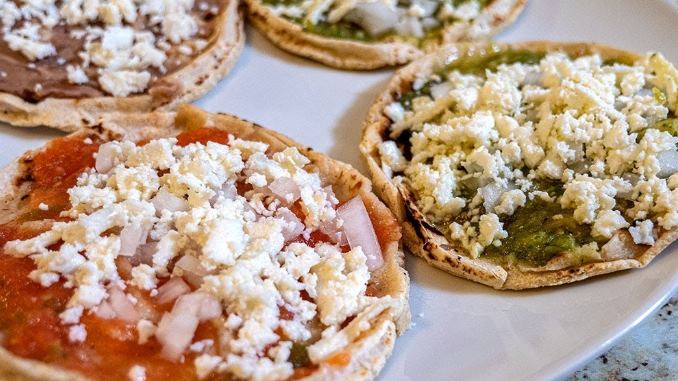 Picaditas and Sopes are two classic Mexican breakfast dishes. However, many individuals find that it is challenging to discern between these two dishes. This article provides similarities and four main differences between Picaditas vs Sopes. Read until the end to grasp all our valuable insights.

Similarities Of Picaditas And Sopes

In Mexico, Picaditas and Sopes are both forms of antojito. They are now readily seen on the street and have various names according to the area.

When it comes to the similarities, first of all, both of these two recipes are widely used in Mexican life for breakfast, snacks, or even lunch.

Secondly, they consist of a cake foundation with a filling on top. The cake’s base is created from masa harina, which is a type of packed maize flour.

Finally, their appearance and forms are frequently circular, which is why they are also known as “Mexican pizzas.”

4 Main Differences Between Picaditas Vs Sopes

Overall, there are four main distinctions, including origin, ingredients, cooking method, and serving.

Despite being Mexican cuisine, the precise origin of Picaditas is somehow still a mystery. Some believe it is derived from Culiacan or Guerrero, both of which are located in the center of Mexico. Nowadays, Picaditas are widely used in Mexico, even the United States.

Meanwhile, Sopes are a traditional Mexican meal from the country’s central and southern areas. They are easy to find anywhere in Mexico but not so common in North America.

The following components are always present in traditional Mexican Picaditas:

Sopes is incomplete without the following ingredients:

The main distinction between these two dishes is how they are cooked. To make the foundation crispy on Picaditas, the cook bakes the masa balls on the grill or comal for 30 seconds per side. After that, the base is topped with a layer of pork Manteca for more flavor. Finally, the cook arranges the filling on top.

On the other hand, the chef fries masa balls in a skillet or comal to produce the foundation for Sopes. Masa balls must be cooked for 60 seconds on each side in heated oil until the cake is slightly puffy. Then the chef removes the base to cool and spreads the filling over it.

Each region of Mexico has its own recipe for Picaditas and Sopes. The former is typically topped with salsa Roja, salsa verde, fresco queso, chopped onion. Meanwhile, the latter usually includes beans at the bottom on the base, followed by a mixture of potatoes, chorizo, salsa, chopped onion, cilantro, and fresh lemon on top.

Yes, there is no gluten in Picaditas. They are typically made with masa Manteca, which is gluten-free.

How Do You Eat Sopes?

Sopes are also known as Mexican pizza. As a result, they are frequently picked up and eaten with one’s hands, similar to sandwiches or Vietnamese bread. However, diners can eat them with a knife and fork if they like.

Can Sopes Be Made With Flour Tortillas?

No. According to the traditional recipe, they are always made from masa harina. So, if you want to make authentic Mexican Sopes, stick to the most basic recipe.

Can Sopes Be Made Oil-free?

As you may know, Sopes are always fried in heated oil. However, if you prefer, you can remove this step to make the dish healthier. But frying Sopes will make it more crispy and delicious.

How Many Calories Are In A Mexican Sope?

Sopes have long been a breakfast and snack favorite in Mexico. Each one usually weighs 57g and provides about 100 calories. An adult requires at least 300 calories for breakfast. So, eat at least three Sopes to ensure an energetic morning.