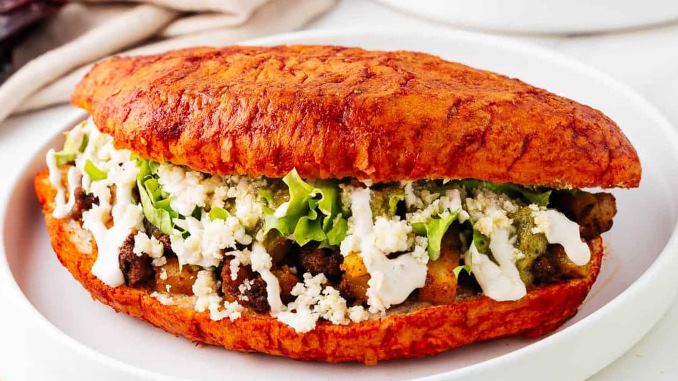 As both pambazo and torta come from Mexican cuisine, many people have believed that they are identical. Yet, these two differ in several aspects. Check out our article to identify the critical differences between pambazo vs torta!

Pambazo is pretty distinguishable from any other sandwich in the world due to its unique recipe.

To make one, the cook needs to soak pan basso, a traditional Mexican bread, into a special chili sauce, then fry it in hot oil until crisp. After that, he prepares the filling with potatoes, chorizo, refried beans, shredded lettuce, some meat, and salty cheese. When the filling is set, he then puts each element into the crispy, bright-red bread and pours a bit of sour cream on top. Now, this hot delicious meal is ready to satisfy any hungry stomach.

Though remarkably tasty, this sandwich rarely appears in any place outside of Mexico. This happens because the bread, pan basso, is not easy to find beyond the border. Also, even when you try to substitute it with any other type of bread, its flavor may not remain as delicious as the original.

Another Mexican sandwich that has gained lots of popularity is torta. This Mexican street food has been many people’s favorite because it is typically considered the best combination of a sandwich and a taco. You can fill it with anything from beans, creamy avocado to cheese and meat of your choice. Simply imagine your favorite taco toppings inside a sandwich. That’s a pretty correct image of torta.

The types of bread used in the recipe are bolillo and telera, which were believed to be smaller versions of the French baguette. Concerning the customer’s likings, this Mexican sandwich may be served after partially dipped or well drowned in spicy salsa.

Although there are several versions of tortas nowadays, professionals state that the most traditional is filled with fried pork carnitas.

Despite their similar origins, these two Mexican sandwiches differ in several aspects, including the bread used to make them, their fillings, and lastly, their taste. Keep reading to obtain a detailed understanding of how to distinguish these two!

Pambazo is made from pan basso, a chewy, tough white bread. Unlike many high-class loaves of bread, this pan basso is made from low-quality wheat. Thus, it was initially invented to help the lower classes in society stay full. However, as time passes, pan-basso is now utilized to make pambazo because its texture enables this dish to have an exquisite flavor.

The softness allows this bread to absorb a great deal of sauce before any frying. Also, even after it undergoes hot oil, pan-basso still manages to become crispy, stimulating magnificent dining experiences for consumers.

Meanwhile, tortas have bolillo or telera as their main ingredients. While the former shares some similarities with soft French baguettes, the latter type of bread tends to be softer, flatter, and rounder than regular French white bread rolls.

The basic filling of a pambazo always contains potatoes sauteed with chorizo alongside some toppings such as creamy beans, lettuce, chicken, cheese, and crema – the Mexican sour cream.

Also, there are several well-known types of tortas. For example, torta ahogada has the spicy sauce poured all over the ingredients to amaze you. Besides this Guadalajara’s signature sandwich, some other instances include torta cubana, torta de tamal, or torta de milanesa.

As the child of tacos, tortas’ flavors are pretty familiar with tacos. Besides, since they are served in various recipes and ingredients, there are tons of beautiful tastes for you to choose from.

Though it does not come with so many flavor options as the other corresponding sandwich, pambazo manages to win a lot of people’s hearts. Because all of the ingredients in this sandwich go well together, it is remarkably spicy, crispy, meaty, and indeed mouthwatering.

Mexican torta is relatively nutritious. Sparkpeople reports that a serving of it typically provides you with around 320.6 calories. These calories come from 18.2g of protein, 11.0g of fat, and 39.8g of carbohydrates. Thus, if you are not on a diet, for example, a low-carb or keto, torta can be regarded as a fast, balanced, and delicious meal.

Though their bread is dipped in chiles sauces called guajillo, not all pambazos are spicy. Depending on how the cook seasons the sandwich, you may get a flavorful yet mild pambazo or a spicy, delicious version of it.