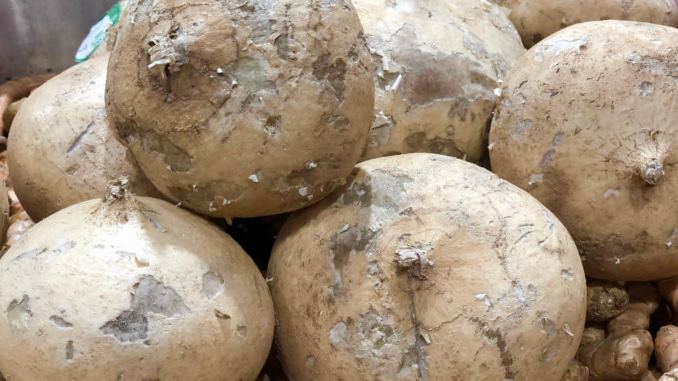 Jicama and yuca share a similar flavor profile; many inexperienced individuals with root vegetables have difficulty distinguishing between them because of their similarity.

Don’t miss this article if you have a similar problem. We’ve put up a list of jicama vs yuca differences to assist you in understanding the differences and identify these two veggies differently.

Jicama, also known as Mexican turnip or yam bean, is a root vegetable of the bean species that have been planted traditionally in Central America and Mexico.

It has a thin husk of brown peel that you can remove carefully with a peeler or a sharp knife before preparing or consuming. Also, its sweetish and starchy flesh is like a fresh pear.

Yuca, sometimes called cassava, is one of the most adaptable crops on the planet. It is a traditional nutty starchy tuber of South America, also found in Asia and portions of Africa. Some popular recipes are fried, cooked, or mashed yuca.

People consider it as an essential element of their carbohydrate diet. As a result, yuca is a crucial source of nutrition in the tropics and a dietary staple for thousands of people.

Moreover, it has become a significant crop to harvest in land-scarce countries thanks to its drought tolerance.

Differences Between Jicama Vs Daikon

When eaten raw, jicama has a mellow flavor that tastes like a mix between a savory apple and a water chestnut.

Meanwhile, the yuca root’s starchy flesh is pale white or cream and has a gritty feel comparable to potatoes. The flavor of its flesh is typically characterized as sweet, mild, and nutty.

Because of its high water and low sugar content, jicama is considered a low-calorie food. When coupled with high-fiber vegetables, it’s an appealing alternative to higher-carb vegetables.

In addition, it’s abundant in minerals and vitamins, including vitamin C, potassium, and fiber. Also, yuca is a valuable source of starch; both of these root vegetables aid in maintaining the immune system.

Moreover, yuca is a valuable energy source for individuals who engage in extracurricular physical activity, such as sports, due to its high carbohydrate content. In addition, dietary fiber, calcium, and potassium are all abundant in this veggie.

Jicama is simple to consume after the outer layer is removed. To peel it, cut off both ends using a sharp knife to form a stable foundation. Then, peel the jicama as carefully as possible, following its curvature. Do the same with yuca.

The jicama may be peeled and divided up like an onion: First, you should have it cut in half and then sliced into 1/2, matchsticks, or diced. Then, it can be eaten raw, baked as fries, or sautéed with other veggies.

Similarly, for yuca, you must remove its tough skin before cooking. It can be cooked, steamed, roasted, fried, or mashed after peeling, which you can eat separately or use in various recipes. Because of the starchy texture, serving yuca with mojo, aioli, or sauce is always a wise decision.

What To Use As A Substitute For Jicama In Salads?

In a salad, Asian pears can replace jicama since their textures are similar to each other. Asian pears resemble apples more than pears, yet they belong to the pear family.

Moreover, they are golden brown and have crisp white meat similar to an apple but with a bit more moisture. Asian pears also have a sweet and tangy flavor, similar to a sweet type of granny apple. In salads, Asian pears can be used as a substitute for jicama.

Does Water Chestnut Texture Differ From That Of Jicama?

The texture of water chestnuts is identical to that of jicama. These two veggies are identical in texture, which means even after frying, they retain their crispness.

Like jicama, water chestnuts may be eaten uncooked. However, it would be best if you only consumed these veggies raw when they are still fresh.

Water chestnuts are a nutrient-dense food. Therefore, people add them to the diet in various ways. For example, you may boil, sauté, or roast water chestnuts in addition to eating them uncooked.

How To Store Yuca?

Seek tubers that are firm and devoid of blemishes. Store the entire yuca root in a cold, dark, dry location for two weeks, much like potatoes. You may also remove the root, fill it with water, store it in the refrigerator for several days, or wrap it firmly and freeze it for months.