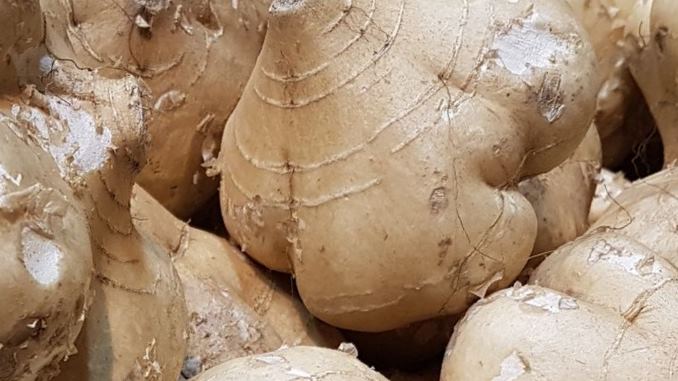 If you are trying to eat Jicama Shrimp Salad, but your refrigerator is out of the main ingredient, is it possible to use turnip instead?

The following article will mention the similarities and differences between jicama and turnip to help you determine whether one can replace another.

Furthermore, turnip is similar to jicama because of its oval shape and light off-white skin after peeling. Both root vegetables are low in calories and can be eaten raw.

Jicama is native to tropical climates, including Mexico and Central America; the botanical name is Pachyrhizus Erosus. It is a member of the family’s potato, with white or blue flowers. The only part you can eat is the root, whose flesh is sweet and crispy.

Its primary season is from November last year to June next year. The development time is from 4-9 months (depending on tuber size).

Turnip is native to East Asia and Central Asia, grown in temperate regions for its coolness, which is most abundant from August to October and can be harvested 40-55 days after sowing. It has the botanical name Brassica rapa and belongs to the Cruciferae or Brassicaceae family. Its flowers are pale yellow.

Although they are similar in shape, their appearance is different. Jicama has rough, thick, and brown skin. When processing, you must altogether remove its skin before cooking.

Turnips usually have reasonably smooth, white or purple skin and white flesh inside. Unlike jicama, their leaves are edible.

Jicama is high-fiber and low-calorie. In addition, it is also a tuber rich in vitamins and minerals (calcium, potassium, iron, manganese, zinc, copper, phosphorus; vitamins E, K, A, B, C).

Yet, these nutrients are only concentrated in the roots, while its stem/leaves/bark is poisonous and should not be eaten. On the other hand, eating jicamas helps strengthen the immune system and increases the prevention of cancer, high blood pressure, heart disease, colds, flu, digestive problems, and skin-related diseases.

Turnip is also a low-calorie and low-fat root vegetable. In addition to the significant fiber content, it also contains many minerals such as iron, potassium, zinc, calcium, sodium, phosphorus, manganese, and vitamins B, C, and K. Hence, people usually include it in the menu when they plan to lose weight.

In addition to strengthening immunity, turnip also reduces the risk of blood pressure diseases, cancers involving the rectum and colon; Support the treatment of rheumatism, osteoporosis, and diseases related to the digestive system (constipation).

However, you should not overeat turnip because it has oxalic acid, quickly deposited in the kidneys, forming kidney stones for a long time.

Jicama can be used raw or cooked but must first remove the outer skin. Then, you can make salads, stir-fries, or soups.

Turnip, similarly, can be eaten raw or cooked, made into salads, steamed dishes, soups, or grilled. Incredibly, when using young turnips for cooking, you do not need to peel them.

1. What do the Irish call turnips?

In Ireland, the Irish call it “Turnip.” Meanwhile, Canadians and Americans call this root vegetable “Rutabaga.”

“Swede” is the preferred term in countries like England, Australia, New Zealand, India, Wales, and many other parts of the world. Sometimes, in the U.S, people call this root vegetable “Swedish turnip” or “Yellow turnip.”

2. Is jicama good for Keto?

Yes, jicama is suitable for Keto. It is relatively low in calories because 100g of jicama only has about 38 kcal. At the same time, this food contains fiber and other vitamins and minerals that are very good for the body. Therefore, you can use it for a low-carb diet or a keto diet.

Below is the nutritional value in 100 grams of jicama:

3. What vegetable is similar to a turnip?

Because of the radish’s unique pungent flavor, it’s not as easy to replace it with any other root vegetable as some people think. But if you don’t have any other choice, here are some vegetables with similar tastes and textures to turnip, including rutabaga, parsnip, celery root, and beet. You can find one of them in grocery stores, supermarkets.

4. Why do the Cornish call Swedes turnips?

Almost everyone in Cornwall thinks “swede” and “turnip” are two different root vegetables. The swede is big, hard tubers, thick & rough skin, and yellow flesh. On the contrary, the turnip is smaller, the skin is smoother and more smooth, and the flesh is white.

However, some Cornish people call swedes turnips because swede goes into a Cornish Pasty.